Alison Brook says that to reverse our poor trade performance over the past 20 years, we need to set goals to build private savings, and champion the benefits of trade

Alison Brook says that to reverse our poor trade performance over the past 20 years, we need to set goals to build private savings, and champion the benefits of trade 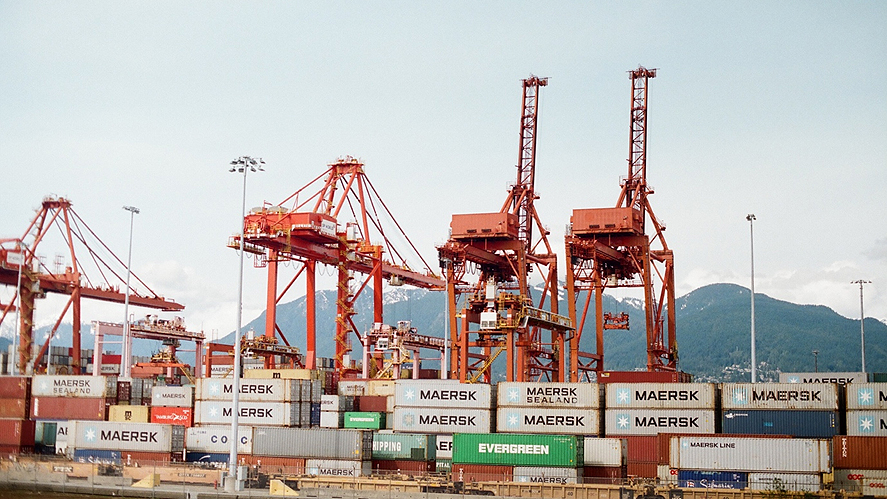 The World Trade Organisation has warned that international trade will grow at a slower rate than before the pandemic hit. COVID-19 restrictions on mobility, disruptions to supply chains and the continued rise in protectionism have all severely tested global trade. Rebuilding trade and international connectedness will be key to a strong and inclusive economic recovery.

For New Zealand boosting trade flow is particularly important as even prior to the pandemic, our relative export performance had been in decline since 2000. Small countries tend to export – and import – more than bigger countries that have larger domestic markets. New Zealand’s small size makes our export performance unusual as we export less as a share of GDP than most OECD countries, and considerably less than other small countries. 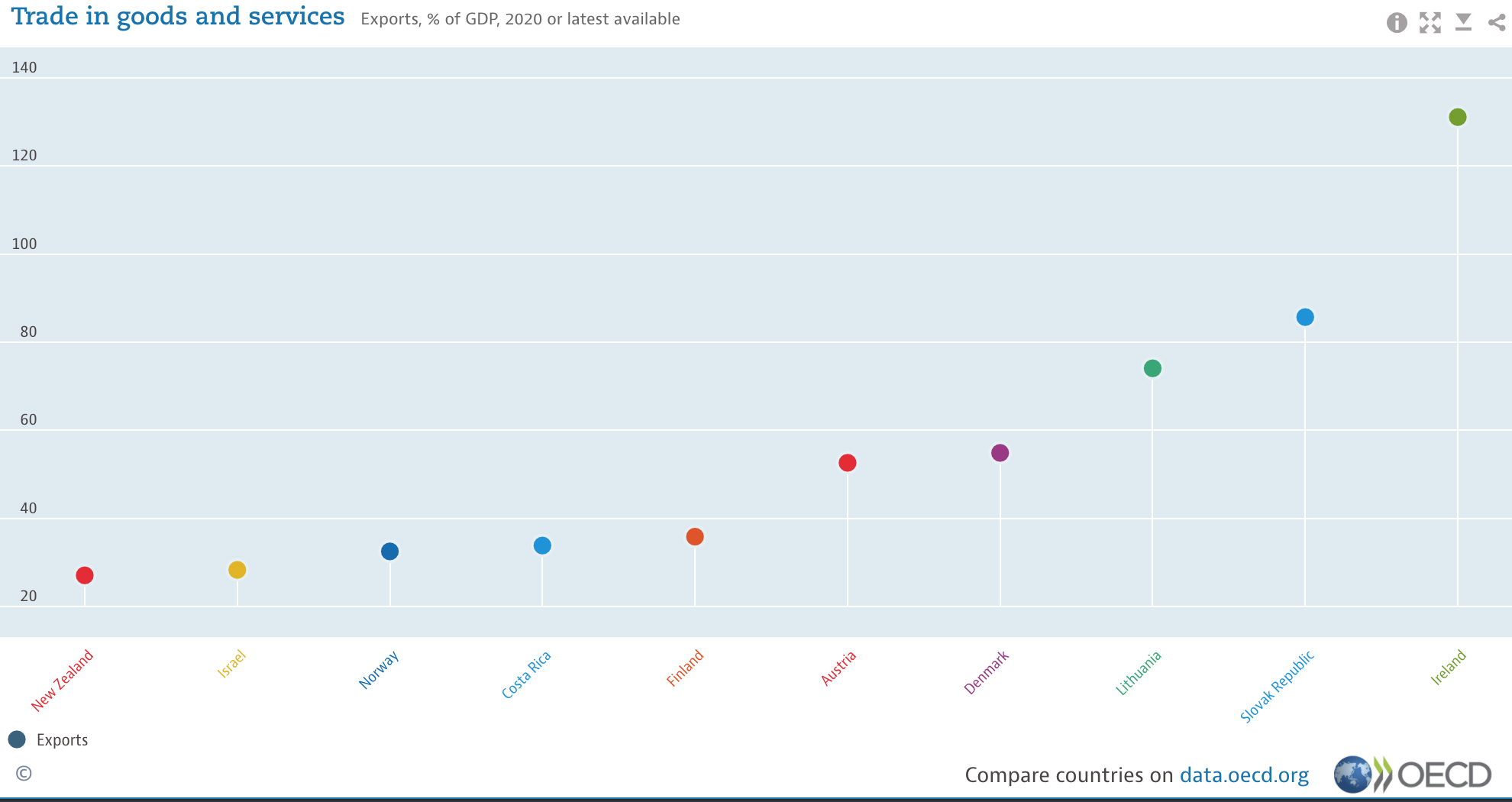 New Zealand exports peaked in 2000 at 35.7 percent of GDP. Since then, they have declined to 27.9 percent. This was at a time when there was a massive expansion of trade globally.

Goods make up 70 percent of New Zealand’s total exports, and of this, 80 percent are agricultural products.

Exports have increasingly been driven by services, which have doubled over the last 20 years to 30 percent of GDP. This is above the OECD median for services exports but is still low in terms of other small OECD countries. Our services exports are dominated by tourism and education which have been hit particularly hard by the pandemic.

Up until the 1950s, England dominated our trade, whereas today China, Australia and the US are our largest export markets. There has been an increase in the diversity of products we export from non-traditional land exports like wine and high-value goods like fashion, movies and electronics.

So, what has caused this decline in trade orientation over the last twenty years? While the causes are widely debated the most cited factors include the ongoing challenges of geography, an over-reliance on agricultural trade, and a persistently over-valued exchange rate.

Remote countries tend to trade less than countries closer to other bigger markets. Despite substantial reductions in transportation costs and significant decreases in tariffs and non-tariff trade barriers, geographic distance still seems to be a major obstacle to trade.

While geographic remoteness is not insurmountable, New Zealand is particularly remote in terms of distance from markets, distance from financing sources and distance from cultural and political centres. In some respects, New Zealand has more in common with other small island nations than small, advanced countries. United Nations Conference on Trade and Development (UNCTAD) analysis suggests geographically remote economies like New Zealand require more innovation than comparable small nations to offset the tyranny of distance.

Some small island economies, like Singapore and the Bahamas, have managed to change their economic destiny and achieve high-income levels, mainly by transitioning away from agricultural to service exports, such as financial, logistical and tourism services. Is there an opportunity for New Zealand to do something similar? 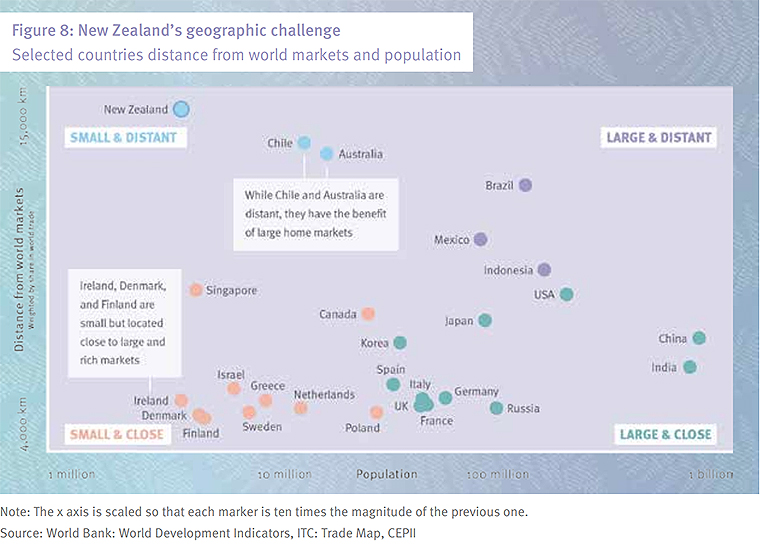 The case for transitioning to services and high-value goods exports

Our terms of trade or the price of our exports relative to imports have improved since the early 2000s, mainly due to the increase in commodity prices.

However, commodity prices are at the whim of world markets, and they tend to be more volatile than prices of manufactured goods or services, which discourages investment. Relying heavily on agricultural exports also puts us at risk us being overtaken as our trading partners improve their productivity.

Analysis from MFAT in 2020 also suggests that our reliance on primary sector exports means we are less connected to global value chains than other economically successful small economies. Because primary exports are orientated towards final consumption, we are less reliant on imports as part of the production process and provide fewer inputs into other countries’ production.

This is important as for many OECD countries there is a strong connection between export orientation and level of imports. Imports may also accelerate productivity growth faster than exports, according to Strategy & Business. In particular, imports of capital goods like plant and machinery boost productivity by encouraging the adoption of new technology.

An overvalued exchange rate makes exports relatively expensive and imports cheaper. It also limits the returns for foreign and domestic investors. A Treasury paper from 2014 noted that while the exchange rate is cyclical, there had been an upward trend in New Zealand’s exchange rate since the early 2000s, buoyed by high interest rates.

The reasons for this may be linked to the persistently high domestic demand (for things like labour and housing) which has led to low private savings. The issue of low savings has been a longstanding one. The Savings Working Group in 2011 pointed out that since the 1970s New Zealand has not had sufficient savings to meet its investment requirements. They also noted that the poor household savings rate probably impacts on low income growth, the attractiveness of housing relative to other investments, population structure and high levels of debt.

Despite the introduction of Kiwisaver, which has been a success in terms of participation, there is no evidence that it has sustainably increased the level of total saving. Our household savings are still very low compared to other OECD countries.

While New Zealand’s challenges are not new, there has never been a more critical time for us to look outwards and find new global markets and potential exports.

In a post-COVID world, trade should be the key to drive our economic recovery. But it won’t happen by chance.

More than ever, policymakers need to set goals to improve private savings and to champion the benefits of international trade to reverse the country’s relatively poor trade performance of the last two decades.

Our recovery from COVID-19, and also our future prosperity depends on it.