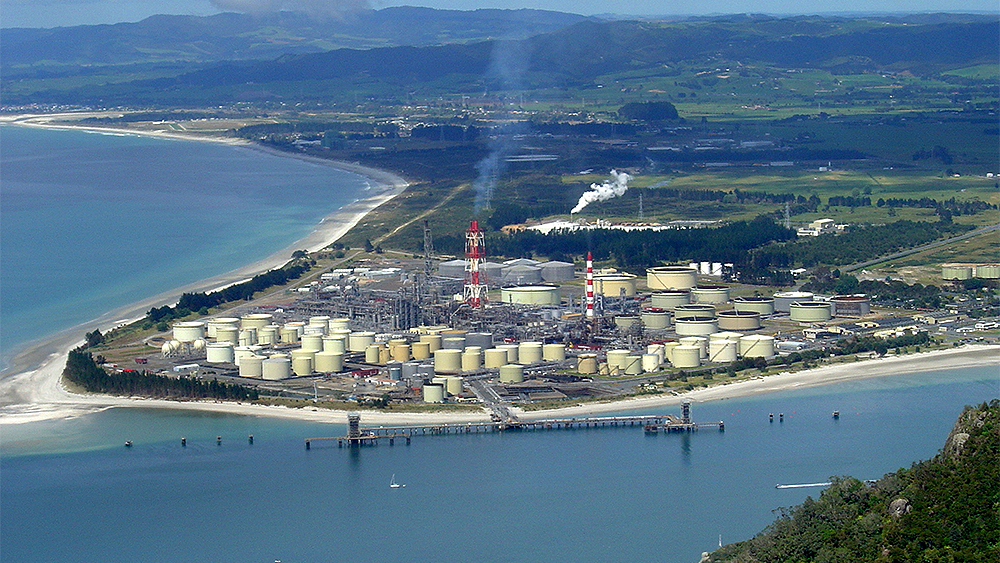 Marsden Point’s refinery website has this to say; “We are a critical link in New Zealand’s energy infrastructure and a major economic and social contributor to Northland. Refining NZ has a reputation as one of Asia-Pacific’s safest and most reliable refineries.”

It’s also well maintained and its equipment is more sophisticated than that of Australia’s two remaining refineries, able to process very low grade crude and produce high quality fuel, especially jet fuel, and by-products such as bitumen and sulphur.

Yet the final step in a decision to close it, dismantle its refining infrastructure and leave only a tank farm, is due to be made any day. All our fuel will then be refined in Asia and imported. Shareholders, dominated by the oil companies, want more profit.

Over 600 jobs will be lost along with the skills those people have. The refinery accounts for 8% of the Northland economy.

Should we believe assurances from the oil companies that our fuel supply will be secure in a crisis?

Secure for essential operations like helicopter and other emergency services, inter-island ferries, shipping to the Pacific Islands, army, navy and air force rescue and disaster relief operations, the trucking fleet that moves goods and food around the country, our agricultural producers, and our air freight exports by Air New Zealand?

In the event of a natural disaster or conflict shipping routes to New Zealand or supplies to overseas refineries could be cut off and the supply of fuel to essential services severely compromised.

In September 2019, state-owned Saudi Aramco oil processing facilities at Abqaiq and Khurais in eastern Saudi Arabia were targeted in a drone attack. Oil production from the world’s leading oil exporter was cut by half.

You think the Asian refineries will say - oops we're short of oil, but that's ok we'll ensure our smallest customer, New Zealand, gets what it needs before our bigger customers?

Tensions in the oceans where tankers from the Asian refineries will need to travel have been increasing for years. China has been claiming vast areas as their own and has built a military base on islands it has reclaimed from the ocean off the coast of the Philippines – in contravention of international laws.

AUKUS, and new pact between Australia, Britain, and the US announced in the last few days will see Australia with nuclear powered submarines.

Shipping lanes may face closure. Where will New Zealand’s refined fuel come from, and how long will it take to source alternatives? We know what it’s like to be at the bottom of the queue with sourcing vaccines.

The head of the Northern Australia Strategic Policy Centre John Coyne is aghast. "They're very naive," he said.

"They're buying into a very dated view of globalisation, and they certainly haven't learned the lessons from Covid-19, around secure supply chains and national resilience."

The pandemic disproved assumptions that global supply chains could readily deliver, whether it was vaccines or oil, he said.

Australia clearly didn’t have faith in oil industry assurances and took steps to protect itself against the possibility of fuel insecurity, the government agreeing to subsidise its last two remaining refineries to keep them operating.

Our government has a responsibility to ensure NZ's fuel security, not leave it to chance. So it should give the shareholders an offer they can't refuse and assume ownership of the refinery. Additional tax on fuel is not an option to line the pockets of private shareholders.

No taxpayer money would be required to achieve government ownership. The government-owned Reserve Bank has created around $60 billion in the last 18 months. The money needed to purchase the refinery shares would be a drop in the bucket.

At least with the refinery operational we could refine our own Taranaki oil (some of which it already processes) and keep essential services running should a crisis eventuate. It would allow us to blend in bio-fuels and other options as they come on stream.

Government ownership would also provide a unique opportunity to break the stranglehold the oil companies have on fuel retailing. That stranglehold is likely to increase with Australia’s Ampol currently making a bid for the county’s largest retail group, Z Energy.

Run as an SOE it could be a wholesaler, selling fuel at a common price, allowing smaller retailers like Waitomo and Gas to compete and others to enter the market and provide real price competition at the pump.

Without the profit component private shareholders demand it would bring the costs of fuel for transport and Air New Zealand down and reduce their costs – an effect we would all benefit from through lower prices.

Can the refinery be saved?

Who knows, but it’s worth a try. Over 15,000 people think so. That’s how many have signed a petition calling for that already. You can find it at https://www.change.org/Save-the-Refinery

*Chris Leitch is leader of the Social Credit Party.

The party of the day is pleased with ESG slogans and career building paths to the UN.

Anything deemed contradictory to these goals will not eventuate.

Thanks for raising the consciousness on this. It should be a no-brainer to retain this operationally on so many levels.

The government would be better off investing in green alternatives to oil. For example, the tallow to diesel plant currently mothballed.

I though beef farming was anything but green ?? That tallow sure isn’t produced sustainably.

It should be doing that too, but that won't power Air NZ and our air freight exports, or the Airforce search and rescue or disaster relief in the pacific. There are other alternatives too, but not feasible without the refinery to blend them.  Things we might consider - https://www.socialcredit.nz/green-energy-hub

I've got friends who will lose their job because of this and I think you have covered all the key points very succinctly in this article Chris, and although my concerns are not exactly the same as solardb, I do think the sustainability of the overall system is compromised.

The main point I took from reading this is currently Marsden can process NZ sourced oil from Taranaki, but those wells themselves are at risk from not being big enough producers and therefore sustainable financially and risk being shuttered.

Therefore if NZ govn bails out the refinery but then everything else falls over we'll have another tiwai point scenario.

Reducing the complexity of the economy is never a good thing in terms of self reliance, and economic resilience.  Also, all that capital in the form of hydroreformers crackers etc will more or less be destroyed if Marsden turns into a tank farm.

Here's the ex-president of Greenpeace Patrick Moore, who's also a scientist, blowing the whistle on fake climate change.

What blew me away were the variations in temperature and CO2 levels in the geological history of earth.

For instance from 250 million years ago to around 2.5 million years ago (between ice ages) the earth was hotter than it's been at any time.  CO2 concentrations have been over 1000 ppm in the distant past, but we're hyperventilation about the current value of 416 ppm.  There was a time when all plant life on earth was in danger because CO2 levels dropped to around 150 ppm where all plant life could have died.   Around 90% of the carbon has been sequestered as limestone and only 10% has been stored as fossil fuel.  Most importantly the temperature cycles of the earth are caused by Milankovitch cycles related to, among other things, the gravitational pull of Jupiter.  Fascinating stuff huh!

I also liked his idea of people being drawn to doomsday predictions throughout history because of a subconscious fear of their own mortality.  I don’t necessarily agree with his views on nuclear power, and I quite like David Attenborough.  But you don’t have to agree with everything someone says to learn something from them.

If nothing else, reading powerdownkiwi's constant posts about energy and how we are going to run out of it give me an understanding of how important having a plan for transition to a more sustainable energy network is.

We are seeing in Britain and Europe the worry about natural gas prices and upcoming shortages caused by the Russians refusing to sell them gas to stockpile for the winter. New Zealand actually has natural gas and the refinery capability to utilize the gas and we are throwing the capability away.

This capability is important because it is the most efficient bridge to a green energy future. We should be investing in solar panels for every household, a charging station network, light rail run on electricity, a shipping line that has ships that run on wind funnels and biodiesel, an airline with planes that run on aviation biofuel + solar power, hybrid fuel trucks and so forth and so on but we aren't.

We are nowhere near having any of these capabilities. Huntly is burning coal to supply power to fill the gap left from our hydro production. I understand that there were plans to use one of the plants at Huntly for biofuel but the local iwi wanted too much for the plant and it never happened.

There was talk from Jacinda about using Marsden Point for biofuels and some hydrogen happy talk but if there was a plan for a transition to a sustainable energy future you'd stop wasting the countries resources, repurpose at least part of the plant for a prototype biofuel plant and tell the oil companies to build another tank farm somewhere else.

If the oil price doubles or the tankers are further disrupted we will be stuck. We will have no green energy network to continue on and no gas to fall back on. We will be burning coal and wood and only the rich will be able be to drive to work. People will be setting up their own backyard biodiesel makers - powered by coal and wood.

How green will that be?

And there is always nuclear, the one zero carbon fuel source for power generation and shipping that some common taters assiduously refuse to acknowledge let alone discuss.....

I don't think any of this is going to interest the current leadership crop. Far too strategic for them. We'll also be eating bark in another 30 years. Lovely. Sooner if JA & co stay in power. The greens are getting their wicked way while not even in power. Someone please tell me this is all a bad dream.

You have heard of our comitments under the Paris agreement? How do you propose we meet them?

New Zealand will be at the mercy of OVERSEAS interests, they could put the price up, so fuel will be very expensive or stop sending fuel to New Zealand, there will be nothing NZ could do about it.

Many years ago in the late 60s, all of NZ fuel came from other countries, yes they had nz over a barrel, Marsden point was built to break their power over fuel prices, so kiwis had some control of the price.

The government does not learn from history as usual.