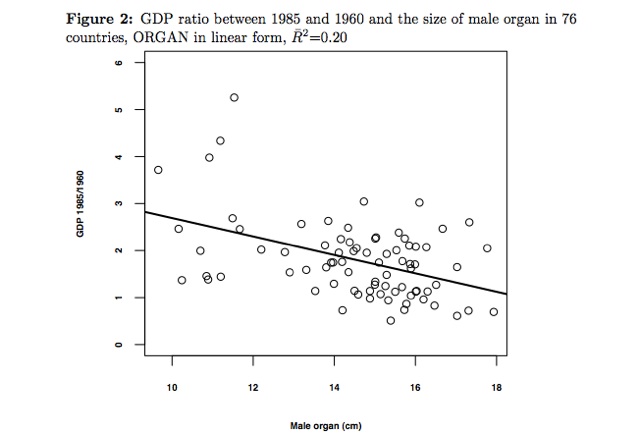 The smaller the average organ, the faster the rate of economic growth.
I bet he got a grant for this:

the University of Helsinki's Tatu Westling points out a surprising strong correlation between a country's GDP growth rate and average penile length. As the chart above shows, countries that averaged smaller penis sizes grew at a faster rate than their larger counterparts between 1960 and 1985. Every centimeter increase in penis size accounted for a 5 to 7 percent reduction in economic growth.

Explains why I'm so poor.
Correlation is not causation, but here's his stab at an explanatory theory:

Penile length and income are both factors that contribute to an individual's level of self-esteem, and if a person has more of the former, he'll need less of the latter. Or, to put it in layman's terms, some fast-growing countries may be compensating for something. Not a particularly poor argument until you realize, as Westling acknowledges, that half the world's population don't have penises.

And the killer quote:

It clearly seems that the `private sector' deserves more credit for economic development than is typically acknowledged.

Via the Atlantic Wire. Research here - to save you the trouble of looking it up, NZ gets a troublingly abbreviated 13.99. Italy does much better.
EconomyUniversity of HelsinkiTatu Westling

Well unfortunately that will upset Steven. But it does go to show that there is an exception to every rule.  He’s both poor and has a small ……, rhymes of course with the word dock.

Unfortunately I’m struggling a bit to read that graph, but if I’m correct and it does say that the R2value is 0.20, then that means there is almost no linear relationship between those two measures at all. In other words in this case, the length of a nation’s male appendages is an extremely poor predictor of its GDP.

This reminds me once of a discussion I had with a Russian scientist I once worked with and the sorts of work that passes for science in deepest coldest Siberia (Novosibirsk). One Professor there had become convinced that human cells could telepathically communicate with each other. So what he used to do was he would set up two petri dishes full of human cells. One of them he would place in one incubator (A) and the other he would place in an adjacent incubator (B). And every morning he would open the door of incubator A and shout abusively at the cells inside. Over time he would then look for any changes in the cells in incubator B.

Apparently a warm winter’s day in Novosibirsk is -20C and it ends up under 12 feet of snow for five months of the year. Vodka was apparently the favourite drink.

One basis it may have in fact is that males have to demonstrate some good genetic trait the female is likely to want to reproduce.

Once, it was stature, presumably in proportion. Nowadays (and it's a temporary situation I suspect) the girls see income as the desirable trait. Perhaps those lacking stature therefore chase the money with more intensity than others of us who are...........taller.

Is that why Phil Goof wants to be PM so much, to make up for a lack of a todger.

One needs to ask why Helen wanted to be PM, she had a bigger penis than her whole caucus (in her mind that is).