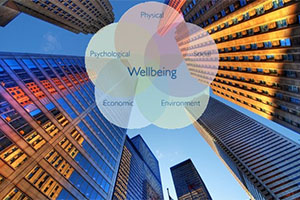 Gross Domestic Product (GDP) is often missused as a headline measure of the well-being of people in New Zealand and around the globe, even though such conclusions go beyond what GDP was originally designed for.

Put simply, GDP is merely a measure of an economy’s capacity to produce and isn’t a good way of grading end outcomes for our society as a whole or how individuals are faring.

As a result, decision makers should refrain from an overreliance on this single summary statistic and instead always focus on a wider panel of indicators for monitoring their economy and making policy decisions.

This conclusion is particularly applicable in the New Zealand context, where a renewed focus on regional economic development has meant that significant emphasis is being put on understanding differences in economic well-being between our regions.

What is GDP anyway?

Before taking a look at the range of indicators that regions should ensure are part of their monitoring frameworks, let’s take a more detailed look at where GDP came from and what its limitations are.

The modern concept of GDP was a by-product of the Great Depression, when people wanted a yardstick for valuing how much an economy could produce.

Put in slightly more formal terms, GDP was designed to quantify the value added at each stage of production across all final goods and services produced within a geographical area over a fixed period of time (usually a quarter or a year).

Given that these final goods and services, that make up the production-based definition of GDP, can be sold or traded, GDP is often also thought of as an income flow that is able to fund consumption and investment.

It is from this logic that some people then make the heroic assumption that GDP can be used as a proxy of well-being in a region, presumably on the basis that a higher level of consumption indicates more people satisfying their lifestyle demands.

At face value, this logic may make sense, but if we back up a couple of steps, it’s not hard to unpick some shortcomings in this approach.

The limitations of GDP

There are many limitations of using GDP as a complete measure of understanding people’s well-being, but let’s take a quick look at a few of them.

Another limitation of GDP is that it only considers a one-time flow of activity over a fixed time period, and does not take a broader look at the underlying wealth and resources at an area’s disposal.  Surely any assessment of how well off an area is must look at the land, capital, labour, and other accumulations of resources that can be used to generate future economic activity and provide for the next generation.

GDP also does not distinguish between how the activity has been funded and where productive capacity is being targeted.  This matters as failing to consider debt financing and what it is being used to produce, invest in, or consume is asking for trouble.  If you have any doubt, consider all the money Greece borrowed for frivolous consumption and where that got them.

Finally, GDP is a highly conceptual measure that is prone to revisions as methodologies are improved or new types of input data become available. As a result, it is wise to also consider variables that can be more tangible assessed against outcomes that are less frequently revised.

Despite the flaws identified above, GDP is still asked to inform policy decisions on a range of issues.

The appeal of GDP for policy makers is its simplicity as a summary statistic that can instantly give people a feel for how an economy is going.

Using GDP as one performance metric is not a problem persay, but things do get pretty dicey when it is used as a key indicator in more complex policy decisions, involving well-being differences between people and regions.

Instead policy makers should consider a range of indicators that have been broken down into a fine level of geographical disaggregation and are updateable.  In this way, regions can be sure that they can benchmark themselves against places facing similar challenges and monitor improvements through time.

Using consistent datasets across these types of topics mean regional decision makers can be confident that they have the tools on hand to monitor outcomes, particularly those affecting the future ability of their area to produce and the well-being of individuals within it. 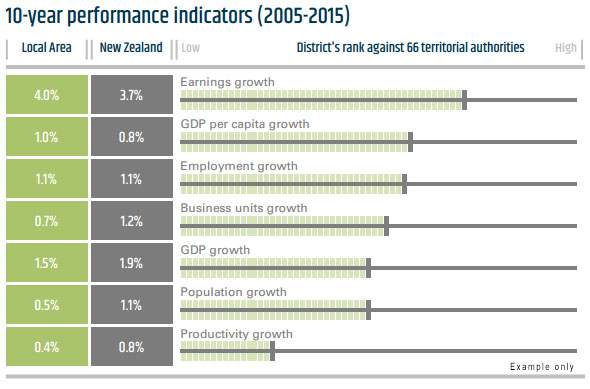 Western civilisation high priest is GDP. All bow to the legends who keep GDP positive and above 2%. We will need a business case to change things. Go the All Blacks!

Don't know about that; certainly round here, there seem to be far more articles arguing, as this one does, that GDP is not a good measure of well being and policy success, than there are articles saying that it is.

I spent a decade promoting the Genuine Progress Indicator (GPI)

and then realised GPI would never be adopted by any western government because it would, amongst other things, interfere with the bankers' Ponzi scheme and expose the fossil fuel sector's phony paradigm.

The present financial-economic-political system can only operate by trashing the planet at an ever faster rate, So that is what we get. Here are just a few examples of the rapidly worsening state of the Earth that are a consequence of the national and international obsession with GDP growth.

The level of ignorance and resistance to truth is so incredibly high that everything will continue to be made worse (Global Destruction Process) until the present financial-economic-political system collapses on the path that leads to the Earth being rendered uninhabitable for humans.
.
By the way, the government removed all 'well-being' aspects from the Local Government Act of 2002 when it enacted the Local Government Act of 2012.

(Not that any council ever abided by the Local Government Act of 2002 anyway: they all devoted their efforts to trashing the local and global environments as quickly as possible and lowering the overall level of well-being. hence the shocking mess we are in now.)

The sooner we get a 6m high tide through the western world the better - will wake up a few people but still may not be enough of a call to action, unfortunately.

Will a 'tide' of 6 million, 60 million or 600 million climate/economic refugees over the next decade or so do instead?

There's also the Social Progress Index, but you won't want to know about that because it suggests that New Zealand might actually have got something right

Yes Benje. GDP measures how much an economy can produce. We need a measures however of who captures the benefit.
The "one percenters" were on to a good concept but also had a lack of imagination. The real problem we have is the 0.000001 percenters.
New Zealand must be run in the interest of the inhabitants, and clearly it isn't.

That ain't clear to me. By many, many measures New Zealand is one of the best places to live in the world, as witness the Social Progress Index referenced in an earlier comment and most other such composite indicators.

Are you seriously saying that none of that is relevant because the only thing that matters is how many people have more money than you?

No MdM. Lets just mark your last line as snide

Another very obvious shortcoming of GDP, is that it doesn't distinguish between negatives and positives. The ChCh earthquake was good for GDP, but I doubt many people would like to repeat that exercise.
.
While we argue over what should and should not be measured, we could start reporting on Green GDP, which takes pollution etc into account.

I have thought that GDP is a rather poor indicator. One could imagine an economy (local or national) where there are not particularly positive activities that cost and contribute to the GDP. eg
As a city grows larger, commuting distances and costs increase per capita. Is this a good economic outcome,- no. This would be measured as an increase in GDP.
If we increase the insulation in houses and this results in less energy consumption it would be measures as a decrease in GDP.
If we increase our productivity and produce a lot more for the same labour cost and the sale cost of goods drop to maintain the balance between the income and expenditure for the population, this would be measured as no change in the GDP. Clearly however everybody is better off.
This matter of Increasing productivity seems to be strangely treated by economics WRT deflation and the OCR, but that is another story.

Yes, GDP is dated. But baby/bathwater. Decline in GDP per capita tells me a heck of a lot about a country, and region. Scale is a key challenge, implicit in any debate on 'regions'.

But GDP does include some important non market transactions for consistency. E.g. Homeowners sell rental services to themselves.

Comprehensive national accounts are supposed to track stocks as well as flows, by the way. Getting fully integrated accounts are not easy though. And they do not contain environmental assets.