Shaun Twaddle says the demographic shift of fewer young people in a time of expanded labour demand will result in better opportunities in the service sector
14th Jun 16, 12:25pm by Guest 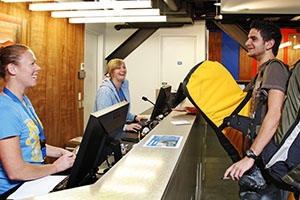 The services industry (e.g. retail, hospitality, hairdressing and beauty[1] is a key component of New Zealand’s economy, employing about 400,000 people or 18% of all workers in New Zealand.

It relies heavily on young people with 30% of workers aged 15-24. Many of these young people work part time, often to fit work around other commitments like school or tertiary study.

Some of these young workers stay on in the sector to become experts in their field, like world renowned chef Josh Emett, while others stay for a short period of time, like I did, and learn valuable transferable people skills that can be used in other aspects of their working lives.

The services sector is a great one for young people and has a dynamic vibe, as shown by the recent ‘BarberCraft’ event.  Got a Trade? Got it Made! is promoting the services sector as a part of its national campaign.  The sector holds a promising future for many and employers in the sector should be encouraged to continue to attract and retain young people in the coming years.    Why?

The services sector is expected to have stronger growth than the economy as a whole over the next five years.

This growth, combined with demand to replace the people who leave, means that it needs to fill 133,000 roles over the next five years. The majority of the new workers required will be in larger urban areas (Auckland, Hamilton, Wellington, Christchurch) as well as tourist-focused centres such as Queenstown and Rotorua.

While the number of workers required in the services sector is forecast to increase, the number of people leaving school is expected to decline by 2.2% over the next five years. For employers, this means that there will be fewer ‘traditional’ workers to fill job openings.

We also know that there is likely to be increasing competition from other sectors in the economy to attract the smaller pool of young people leaving school.  For example, infrastructure, building and construction are expected to have strong job growth over the coming years, with the building sector often referring to this increased demand as the ‘wall of work’.  Often, these sectors, particularly the traditional ‘trades’, are the more obvious pathway for young people and their career influencers.  The services sector should feature equally in career discussions with young people as the sector has strong career pathways and viable long term career options.

It’s also interesting to note that given expected growth in the sector, which has scope to grow even further if tourism maintains its current growth trajectory, the sector is likely to look beyond its traditional pool of labour (i.e., those aged 15-24) and target older age groups. This is a logical shift, but is likely only to really occur long-term. In the short to medium term however, young people are likely to be the focus for employers when hiring workers.

So what does this mean for young school leavers, particularly those interested in the services sector or who have a number of NCEA credits in the ‘services sector’ vocational pathway (the blue pathway)?

Employers who are investing in the next generation of workers in the sector will need to focus on strong attraction and retention strategies, which could include additional training and development opportunities and wages.

As a result, young people are likely to have more choice in terms of the roles that they can undertake, improved training and development opportunities and, of course, pay.

[1] For employers who deal with industry training organisations, these industries are covered by ServiceIQ and HITO.  ServiceIQ also covers other industries such as aviation, wholesale trade and tourism (part of which is covered by the services industry).

Shaun Twaddle is a senior economist at Infometrics. You can contact him here ». This article originally appeared in Infometrics’ blog and has been republished here with permission.

To suggest that the service sector will provide long-term career prospects is to grossly mislead.

Continued burning of fossil fuels and habitable planet a decade or two from now planet are mutually exclusive concepts.

Given the point humanity has already reached energetically (falling EROEI) and environmentally (surging atmospheric CO2 and collapse of ecosystems), it is abundantly clear that there will be hardly ANY employment in the service sector (other than perhaps a little in healthcare and distribution of food) a decade or so from now.

Great to see this job expansion, they will soon be lining up to buy houses in Auckland.

Wow, we are going to need more immigrants to fill these essential service positions if there is a "skills" shortage in this sector. Added benefit is that they may know the native language of the hotel guests....

They will be worked like slaves and paid the minimum wage.
Just lke the dairy workers.

what about cheap immigration, bro? this article is nonsense.

Have to agree with Ian

"While the number of workers required in the services sector is forecast to increase, the number of people leaving school is expected to decline by 2.2% over the next five years. For employers, this means that there will be fewer ‘traditional’ workers to fill job openings."

We have record immigration (students and low skilled migrants) at the moment and it is likely to continue so I am not sure that simply stating that the number of people leaving school dropping by 2% will have any impact on the number of "traditional" workers (whatever that means).

Maybe Indian chefs and Fijian truck drivers don't want such entry level positions, in the case of the chefs they may have several years of bonded labour before they can freely join this sector and step up to minimum wages

Yeah, very talked up, but don't kid yourself, these are never careers, just filthy, tedious jobs which produce nothing or schlepping stuff for the nice rich folk and wiping up their dross. It is where you go when you have not planned well and will always be paid just barely enough for you not to shoot your manager. Until NZers have been pummelled into abject poverty, misery and complete hopelessness these jobs will only be suitable for exploitable imports with no education.