Low interest rates are one factor helping us run smaller current account deficits, bolstered by an improvement in our national savings rate. But rising investment will require the savings rate to improve further

Low interest rates are one factor helping us run smaller current account deficits, bolstered by an improvement in our national savings rate. But rising investment will require the savings rate to improve further

This article is a re-post of the Special Topic in the August edition of Treasury's Monthly Economic Indicator report.

The average size of deficits recorded in the current account of the balance of payments has been relatively low in recent years. During the same period New Zealand’s net external liability position has decreased from 80% of GDP to 60%. These developments suggest that the New Zealand economy is less likely to experience a disruptive outflow of foreign capital than in the past. This special topic looks at the factors underpinning the lower deficits and considers the implications for Treasury’s forecast of wider deficits in coming years. 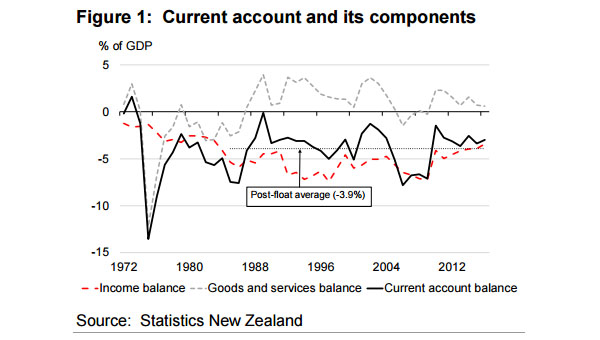 Figure 1 shows that New Zealand has persistently run current account deficits and that this is primarily driven by the income balance (which includes interest payments, dividends and reinvested earnings). These outflows are in turn a reflection of the sizeable stock of international liabilities New Zealanders have accumulated over time. These income outflows reduce gross national income (or GDP) to give gross national disposable income. When national disposable income is less than the value of current consumption (both private and public), the difference must be met from lower domestic saving or, where domestic saving is not sufficient, by borrowing offshore. Alternatively, given that saving is the difference between gross national income and consumption, then if saving is not sufficient to fund all investment, the balance must come from foreign saving.

At times the imbalances between saving and investment have been very large giving rise to concerns about how the necessary adjustment would take place. In particular, the risk was that large capital outflows would precipitate sharp adjustments in asset prices and consumer behaviour. In the end, the global financial crisis (GFC) and ensuing global recession provided the trigger for adjustment.

Figure 1 shows that much of the current account adjustment has occurred through the income balance. From around 7% of GDP in 2008, income deficits have retreated to around 4% of GDP. The main drivers have been reduced outflows of investment income from foreign investment in New Zealand and reduced interest payments offshore as global interest rates have fallen and the level of external debt has stabilised.

In contrast, the Treasury’s Budget forecasts show the annual deficit widening to 3.5% of GDP in June and to 4.6% of GDP by June 2017. However, the Treasury has tended to overestimate the extent of deterioration in the current account. Figure 2 shows that in each Budget from 2012 to 2015 the Treasury forecast the current account deficit to be between $13 billion and $17 billion (or 5.6% to 6.7% of GDP) by the end of 2015. The Treasury’s most recent forecast projects a deficit of $15 billion (4.8% of GDP) in March 2020. 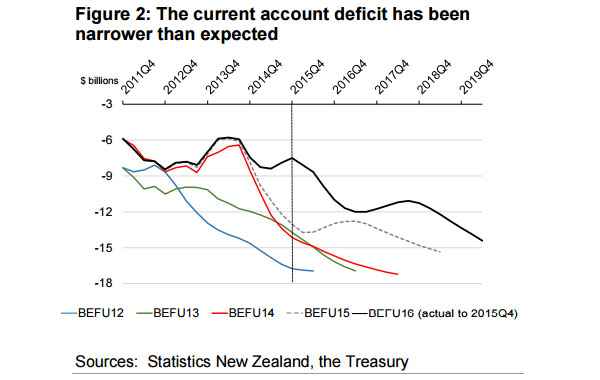 A variety of factors at play ...

When we look into the source of these forecast errors we find a number of factors at play, which is not surprising given the variety of factors underpinning the current account (including commodity prices, import and export volumes, exchange rates, interest rates, profits and their interactions etc). Nevertheless, the main drivers of these errors appear to be:

• export volumes proved more resilient to drought than anticipated in Budget 2013 and 2015
• the sharp rise in export prices in 2014
• persistent strength in services exports from late 2014
• ongoing weakness on global interest rates.

These factors have all tended to support a lower current account deficit and the associated financing requirement. 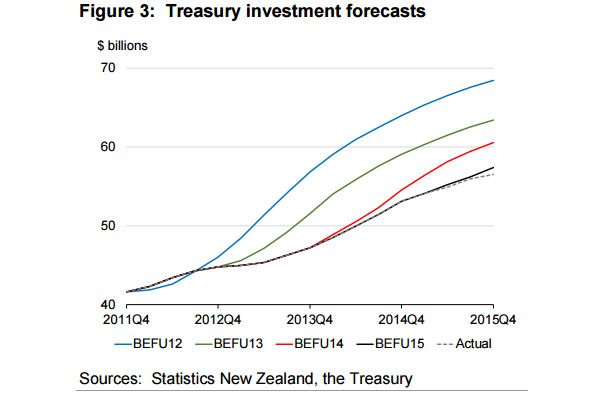 At the same time, we also find that domestic investment has consistently disappointed our expectations (Figure 3). Both business and residential investment have been more sluggish than anticipated, which reduces the demand for finance, and takes pressure off the current account balance. Increased national savings have also reduced the need to access foreign saving (Figure 4). However, the Treasury’s forecasts of national savings have tended to be reasonably close to the most recent figures, which suggests that lower investment demand is the main contributor to the narrower-than-expected current account deficits. 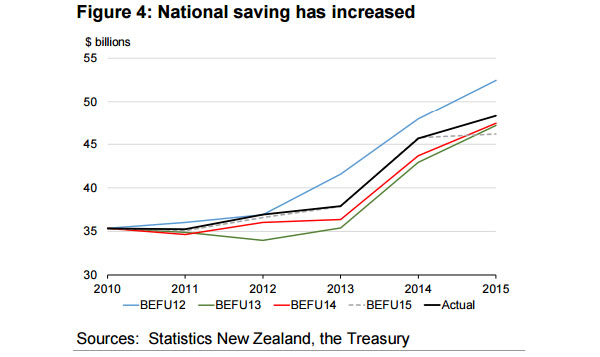 Reasons for weaker investment include the Canterbury rebuild not progressing as expected, but that does not explain all the difference from forecast. The relatively subdued pace of investment growth is likely to reflect, at least in part, some of the same factors that are contributing to the global slowdown in investment growth. These factors are not well understood, but may include uncertainty around the strength of consumer demand, rising regulatory burdens and expectations of higher future taxes.

... raising questions for the future

This raises the question of whether current accounts deficits of around 4%, which is the average since 1984, or less can be sustained over the longer term and whether it is in some sense optimal or desirable to do so.

There are a range of views. One view is that accessing foreign saving to fund domestic investment is rational provided the returns from doing so are sufficiently high. On the other hand, the need to borrow offshore may be seen as a sign that domestic policies are somehow promoting an imbalance that needs to be addressed.

A position somewhere between these views would suggest there is little concern with ongoing modest current account deficits. However, whether that deficit is 3%, 4% or 5% of GDP is largely a matter of judgement about what can be comfortably sustained over the longer term. That is, are the current account deficits causing New Zealand’s net liabilities to increase to a point where they are likely to cause funding issues? For example, in the mid-2000s New Zealand’s current account deficits exceeded 7% of GDP and the net liability position rose to over 80% of GDP (subsequent data revisions show the net liability position was around 75% over this time), giving rise to concerns about the consequences of a sudden drop in international demand for the country’s securities (including debt and equity).

Although the deficits continued to be funded without apparent difficulty, the composition and tenure of funding increased our vulnerability to adverse developments in foreign financial markets and imposed additional costs, through risk premia on lending and other investment, on the economy.

Looking forward, provided the improvement in national saving remains in place, the current account deficit may remain within its recent range of between 3% and 4% of GDP. However, if a faster pace of investment were to eventuate (which seems desirable) further adjustment in saving is likely to be needed to fund it.

On the trade side, higher investment would likely be reflected in higher imports, which suggests improving our productivity through better skills, infrastructure and regulation and ongoing success in accessing new export markets would be needed.

1. The capital account, which captures capital transfers such as the Canterbury earthquake insurance claim settlements is a further source of financing.

This article is a re-post of the Special Topic in the August edition of Treasury's Monthly Economic Indicator report.

At times the imbalances between saving and investment have been very large giving rise to concerns about how the necessary adjustment would take place. In particular, the risk was that large capital outflows would precipitate sharp adjustments in asset prices and consumer behaviour. In the end, the global financial crisis (GFC) and ensuing global recession provided the trigger for adjustment.

“In a barter economy, there can rarely be investment without prior saving. However, in a world where a private bank’s liabilities are widely accepted as a medium of exchange, banks can and do create both credit and money. They do this by making loans, or purchasing some other asset, and simply writing up both sides of their balance sheet.” Read more

It used to be simpler, but their series of videos are still simple enough to initiate people.

one mans spending is another mans income...

In the world of credit creation.... savings may largely be the counterparty of borrowing..
In this regard, savings is more a function of debt ( credit growth ) than of "deferred consumption ", which is the classic economic definition of savings..

ie.. A savings glut might be nothing more than a borrowing frenzy..