Against the backdrop of technology and globalisation driven job dislocation, Tom Peters argues we have to help people

Against the backdrop of technology and globalisation driven job dislocation, Tom Peters argues we have to help people 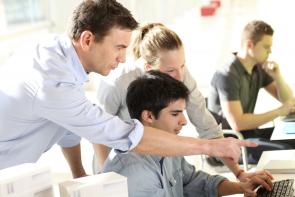 *(Management guru and author Tom Peters spoke at an alumni event hosted by the Business School in March 2017. You can also see him in this interest.co.nz Double Shot interview here).

Everywhere we look, work as we know it is being transformed by the seemingly unstoppable forces of technology, globalisation, and the digital revolution. According to one estimate, nearly half of all jobs in the US alone are at risk of being computerised within 20 years.

President Donald Trump and his fellow US populists have responded by attempting to wind the clock back, resurrecting old industries, and throwing up tariff and migrant-worker walls. But is old-style isolationism the best way to confront job uncertainty?

At a time of unprecedented job dislocation, where even once-impregnable professions are falling to intelligent machines, what can we do to safeguard meaningful work for everyone?

These were among the questions put to management writer and consultant Tom Peters, a Distinguished Visiting Fellow at the University of Auckland Business School, by the school's Professor of Connectivity, Darl Kolb.

"We are possibly on the edge of a truly significant jobs crisis, driven by technology," said Peters.

He quoted a recent Oxford University study that claimed 50% of American and British white-collar jobs would be under assault in the next ten to 20 years.

"We spent the past 25 years automating our factories – first we attacked the factory jobs, then the back-office white collar jobs, and now we are going after the lawyers, and the doctors, and the engineers," he said.

"In the past 15 years, China has lost 35% of its manufacturing employment. They are being hit as hard as the rest of us. One way to describe that in a memorable fashion is that Foxconn – which among other things assembles Apple products – a year ago placed an order for one million robots. So, it could really be a crazy time."

His advice to firms wanting to survive the dislocation: "Develop people to do fabulous work. Be the best. It is the only market that is not crowded."

It is a message Peters first articulated in the 1982 bestseller In Search of Excellence, co-authored with Robert Waterman.

"We know what big companies everywhere do. They cut costs, throw people over the sides, and commoditise the product or service. If there is a single word that I despise in the English language, it is the word 'commodity' – that is a race to the bottom."

Citing the success of Australia's largest franchise, Jim's Group, which specialises in doing jobs that no one else wants to do – from grass cutting and dog-walking to window cleaning and asbestos removal – Peters said that business opportunities were "infinitely available".

As to whether any country is capable of slowing the tide of globalisation, Peters suggested that President Trump would discover how unrealistic it was to talk of unwinding the intricate international network of manufacturing and distribution relationships.

"Any complex device has so many components from so many places that untangling it is an impossibility."

The more fundamental problem, said Peters, was the economic pressure now being put on the middle classes – and particularly on the job security of middle-class white males – in the US, Britain and elsewhere.

The problem, he said, was that jobs were not being created by new investments in the numbers that they once were. The answer was to help small and medium-sized companies to do well, grow and add jobs.

"Business is all about developing people. I have never seen a tombstone that has someone's net worth on it," he said.

"The only stuff you remember when you get old are the people you helped. And that is as true for a business woman or business man relative to their two or 2000-person enterprise as it is for anybody. That is the signature of your life achievement.

"And if that is a true story in general, in the face of the technology coming down the pipe, it is multiplied by an order of magnitude. We have got to help people."

*This article was first published in the March 2017 issue of UABS Insights, and is reproduced with the permission of the University of Auckland Business School.

Have an atavistic allergy to management gurus, but this one is on the ball when he suggests that you get the greatest pleasure in life out of helping others; in particular if you can give them a worthwhile job, and watch them grow....

The problem is going to be how you give people worthwhile jobs-as in both personally and financially fulfilling.
Consider this example. In 2013,General Electric(GE),a company which employs thousands of engineers and designers worldwide,wanted to fid out if it could design lighter and stronger aero engine brackets. Rather than putting the problem in the hands of its own people,it put out a challenge on the internet. Within weeks,it attracted almost 700 replies globally.
None of the 10 finalists were American or aeronautical engineers. The winner was a 21 year old engineer from Central Java,Indonesia. His design enabled GE to cut the weight of the bracket by 84%,while maintaining its structural integrity. This process cost GE very little. Superficially,the story is about how technology is enabling ever greater knowledge transfer on a global scale,but it clearly has implications for the continued employment prospects of GE's many engineers.