Shamubeel Eaqub says the reality is that we are soft on white-collar crime and we aren’t good at regularly updating our rules and regulations
3rd Jun 17, 6:02am by Guest 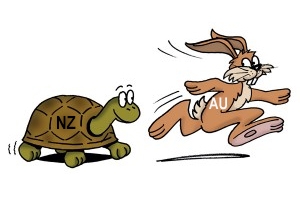 This is the tenth and final article in the Public Service Association's "Ten perspectives on tax" series.*

New Zealand ranks highly in international rankings of transparency, low corruption and ease of doing business. For the most part, the praise is well deserved. But there are some parts of our rules and regulation that are not as transparent nor as fair as they should be.

The Panama Papers exposed how our light touch regulation of foreign trusts can be abused. The rise of global online businesses, but not the taxes paid, shows how our tax system is not keeping up with change. The UK and Australia have led the way in collecting taxes from multinationals like Google and Facebook, who generate significant revenues but don’t pay much tax. New Zealand is approaching slowly alongside an OECD review.

A thorough review of the foreign trust regime by John Shewan highlighted the problems, and the need for greater regulation. This has not happened. Even when the problems are clearly highlighted and solutions proposed, policy change is slow.

There is a lethargy in improving the tax system in New Zealand. Like many policy issues – tax, housing or poverty, for example – political leaders are entranced by the tranquillising drug of gradualism.

A massive leak of documents from law firm Mossack Fonseca sheds light on a shadowy world of the rich hiding their money from prying eyes, tax evasion and money laundering by criminals.

For New Zealand to be caught up in it is, at face value, surprising. We are after all one of least corrupt countries in the world. Our rules and regulations are meant to reflect our moral fortitude, based on principles of fairness and transparency.

But these are not always the case. Perceptions can mislead. The corruption and rot that we have – all countries have them – are much subtler and more white-collar than the most blatantly corrupt countries. Corruption cases here are often about nepotism, the subtle use of loopholes in rules and regulations, and the low numbers of prosecutions for white-collar crimes with lenient penalties.

New Zealand’s role in the international scandal is real. Our offshore trusts have been used by those looking for anonymity, because if the beneficiaries and their incomes are offshore, there is no requirement for informational disclosure. By running money through various tax havens and vehicles like New Zealand trusts, the ultimate beneficiaries are hidden, and their tax liabilities avoided. This very likely facilitates money laundering in some instances.

New Zealand doesn’t demand a detailed and transparent register of these trusts because they wouldn’t be paying tax in New Zealand anyway. So there is little threat to our tax base, but it would cost money to administer the register.

And so our foreign trust rules are firmly in a moral grey zone. Our own citizens are unlikely to be much affected by them, but we have a moral duty to ensure our rules and regulations do not facilitate dishonest practices by others.

These New Zealand rules have been in place for some time. So it is not the fault of any one particular political party. But the immediate reaction from our current government that there is no problem, that we have been cleared by the OECD (we haven’t) and that there is little need for change – that’s where the problem is. Our politics is incremental and the knee-jerk reaction is to stop, stymie and discredit criticism and maintain the status quo.

There is a glaring absence of leadership when it comes to tackling issues that are difficult. The Shewan report called for much greater transparency alongside upcoming changes to anti money laundering (AML) rules. While the AML umbrella is being widened from financial institutions, even large banks are not well prepared for the AML duties. Expecting accountants and real estate agents to do so seems fanciful.

The reality is that we are soft on white-collar crime and we aren’t good at regularly updating our rules and regulations.

Rules and regulation understandably take time to change. But the truth is that there’s no ‘finish line’ when it comes to rules and regulations. The backdrop is always changing and very clever people are working hard to find ways to work around the rules all the time. Rules and regulations can never be perfect. We have to take a Kaizen approach to our regulatory approach – constant improvement.

Taxes – nobody likes paying them. But they are a useful way of co-ordinating and paying for things we value and would not otherwise happen: justice, health and education, for example. Making sure everyone pays their fair share means that the burden is spread across the many rather than the few.

But not everyone is paying their share. Perhaps the most galling are the large and highly profitable multinationals that book their revenue in other tax jurisdictions to reduce their tax payments. It has become known as a ‘Google tax’, as Google has been booking its ad revenues in low tax jurisdictions like Singapore to avoid paying higher taxes in places like New Zealand or Australia where they are selling these ads.

But some countries are fed up and want to crack down on it.

“Everyone has to pay their fair share of tax, especially large corporates and multinationals, on what they earn here in Australia,” said Scott Morrison, Australia’s Treasurer, in his annual Budget speech. “Multinational corporations that attempt to avoid tax by shifting profits offshore will be subject to targeted anti-avoidance measures and high penalties.”

Australia follows a similar crackdown in the UK last year. The penalties for profit shifters will be more severe though – Australia will charge a penalty tax rate of 40 per cent, compared to 25 per cent in the UK.

The Treasurer believes that the new policy will net them nearly AU$4 billion in revenue over four years. This is money they will not have to raise from other parts of the economy, or borrow, to fund planned spending.

Cracking down on multinational taxes isn’t cheap, nor easy. They are investing in a 1,300 person and AU$679 million funded taskforce to implement this. Perhaps we could throw some resources at this Australian taskforce and look at harmonising our approach, to leverage their investment. The gains would be large relative to the investment.

With our closest economic partner, Australia, and the historically connected UK cracking down on multinational tax avoidance, we are out of step.

Our approach to multinational corporate tax avoidance has been to persistently point to a review being done by the OECD, a club of rich countries. The reaction was the same to the initial release of the Panama Papers, which showed that our foreign trust rules were allowing foreigners to use New Zealand structures to flout their tax obligations.

Tax policy isn’t sexy and often too complex to lend to pithy straplines. In poll-driven politics, this makes tax policy a low priority.

Tax policy is difficult and a measured approach makes sense. It also makes sense to act early, rather than wait for some consensus – which inevitably takes too long and gets too diluted by the time all the special interest groups are appeased. The Australian Budget has gotten on a jump on New Zealand on tax policy. It should be a catalyst for us to speed up tax reform in New Zealand and make it a pivotal issue for the election this year.

* Shamubeel Eaqub is an economist, columnist and author. He works at Sense Partners, a boutique economics consultancy. This is the tenth and final article in the PSA's "Progressive thinking series, Ten perspectives on tax."

The foreign trust rules have been changed and come into force on July 1. It looks as if they will be effective, as long as NZ has a tax treaty with the other country involved. (Malta is a worry and we don't have a tax treaty with it.) The Sarawak Report has covered our involvement with the 1MDB scandal in a damning post. I wrote about the foreign trust situation in NZ here: http://www.noted.co.nz/money/economy/new-zealand-the-little-tax-haven-t…

We are soft on blue collar crime too.. aren't we just soft on all crime?

"NZ doesn’t demand detailed and transparent register of these trusts because they aren't paying tax in NZ anyway. So there is little threat to our tax base, but it would cost money to administer the register"

Multi-Nationals get a free-pass in NZ
NZ doesn’t demand anything from the Multi-Nationals because they aren’t paying much tax in NZ anyway. So there is little threat to our tax base, but it would cost money to administer. Tax-Free entities can out-compete taxed entities all day and every-day

If NZ MSM did any investigative journalism at all, maybe there would have been pressure on politicians to actually change something. As it it, NZ media appear to just wait for the info politicians in NZ give them and merrily regurgitate it, or else they just print stories about what Adele had for breakfast and how many avo's millennials eat. I would wager that MSM in NZ is even more corrupt and self serving than the politicians.

Sovereign States (so called) like NZ now serve large global corporate interests, not the other way around.

There's been international pressure for ten years for NZ to clean up the trusts and companies registration regime, because it's known to be exploited by terrorists, arms dealers and transnational organised crime. Nothing's been done. Low-corruption country my arse.