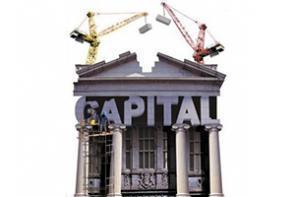 Once in a while I meet bankers and bank regulators, sometimes over a cup of coffee, sometimes over a glass of pinot noir. In fact, I will shortly attend an event with the RBNZ's Adrian Orr at the brand new PwC centre in Wellington.

When it comes to bank capital, the narrative shared among folks attending New Zealand bankers' conferences is invariably the same. Yes, our capital ratios are not ‘unquestionably strong’. .... But then there is always a smarty-pants pointing out that the New Zealand risk-weights are conservative. "The true ratios are actually much higher."

The question then is, how much higher are these 'true' New Zealand bank capital ratios?

Any guess is as good as mine. This PwC study, for example, claims the ratios should be at least six percentage points higher. That, of course, is outrageous. If that were to be true, then there would be flags waving on top of the Reserve Bank's asbestos affected building declaring that New Zealand is "home of the best capitalised banks in the world."

Grant Spencer, in his speech of March 2017, offers a more reasonable estimate. He thinks we should elevate the ratios by one to two percent.

Any uplift between 600 and 100 basis points will give you a true picture of NZ bank resilience.

This is confusing for sure. International investors want to compare like for like - not apples and oranges.

Perhaps it is time for the RBNZ to look to the West and follow the Ozzie prudential regulator. The Australian Prudential Regulation Authority earlier this month issued an interesting discussion paper. Dated 14 August, the paper expresses the concern that the differences between APRA's and international capital ratio definitions are not well understood: "... the capital strength of Australian ADIs may be underestimated, which could in turn make it more difficult or costly for ADIs [authorised deposit taking institutions] to raise funds and access international capital markets (particularly in times of market disruption or other financial stress)."

The current APRA definition of capital ratios is so conservative that some banks now report 'internationally comparable’ common equity tier one capital ratios. However, these ratios are hardly comparable, because they lack regulatory support.

The APRA discussion paper offers two alternative solutions to end the problem of confusing capital ratios. Both will demonstrate even more clearly APRA's desire to supervise banks that are unquestionably strong.

Instead of tinkering with the ratio definition, as the RBNZ currently seems to do (in the pursuit of imaginary perfection), perhaps the RBNZ should follow suit.

This is the reality of why APRA is seeking to clarify capital ratios:
https://www.macrobusiness.com.au/2018/08/australian-banks-giant-mortgage...

"CBA (as do other major banks) represent that on an international comparison basis that their capital ratios are much stronger than the APRA regime reflects. In the case of CBA a massive >50% better. This is patently an unprovable claim and can be proven false when each individual item is analysed."

As a regulator, APRA is unquestionably weak.