The credit cards were very much put back into their card holders last month. VERY much. Credit card billings had the biggest monthly fall on record.

The big drop came as overseas travel slammed to an abrupt halt and with the lockdown starting towards the end of March.

And the falls came particularly in the monthly amounts billed, but also quite markedly in the outstanding balances, figures released on Thursday by the Reserve Bank showed.

At $6.887 billion, the amount outstanding on NZ credit cards is at its lowest level since September 2017.

The RBNZ gave the following highlights for March 2020 (all figures are seasonally adjusted):

Presumably with so much of April being spent in lockdown, this month's figures will also be down.

What will be of great interest in coming months is whether credit card balances start to rise again if people with short-term income problems start to use their cards for short-term cash requirements - but also the extent to which spending either does or does not start to return to previous level as and when more businesses, particularly retail, open. 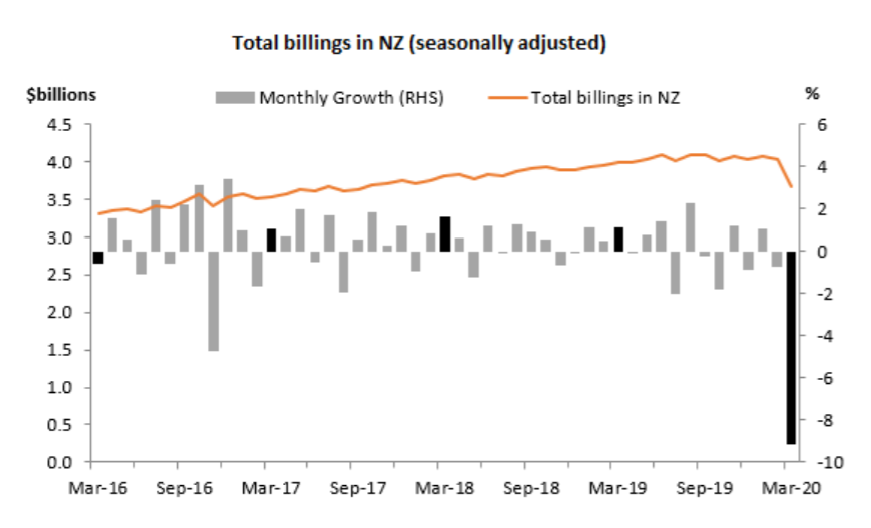 Don't you mean debit creation is down?

Helped by the self employed Covid cash drop of $14k and the various redundancy packages no doubt.

Not surprising - less eating out, entertainment, and other discretionary shopping and spending. Lock down has been good forced saving.
Couple of points:
- The biggest challenge for many SME especially such as restaurants will be hopefully to re-establish previous customer behaviorual patterns, and
- While not wishing this on anyone, the reduced spending will provide an idea of how much one can cut back on discretionary spending.
I see a slower recovery than many expect; not only through job loss and reduced wages, as well as less international and domestic travel, but also a nervousness in returning to previous levels of discretionary spending. That new washing machine and TV, new outfit, dining out are all going to be put on hold until the economy returns to normal and personal confidence returns

A lot less international travel, especially by air. Airlines will have to completely revise their model, if they want to continue to make it accessible to everyone. I rather suggest that equity differences are going to make themselves a lot more apparent and as a result a lot more pressure will come on Governments to do something about them.

You forgot to mention the word coffee and smashed avocado, no LVR-FHB deposit, it's never been a good time right now to use the redundancy payment from any company.. visit the OZ Banks, they're very prudent lending into the F.I.RE economy. And apply for new home loan, this in turn with magical housing price inflated valuation.. THEN Kiwis can go back to the OZ Banks to ask for more business loan, borrowed against that handsome property prices, to re-ignite the tourism, education, restaurant, hotel/motel, airlines, airport, etc.
https://www.scoop.co.nz/stories/HL1507/S00101/the-fire-economy-new-zeal…

Credit cards and their loyalty points programs are bear traps. Just use a Visa/Mastercard Debit card.

Just wait until the "Celebrate Level 3 at our Mega Sale!" campaigns start!
Temptations of all sorts; out to return those spending habits to normal, before any nasty new ones have a chance to solidify.
(eg: Was $227 now $77 https://www.smithscity.co.nz/essential-items/phones-and-accessories/mob… )

Our credit card halved and it wasn't for the full month of lockdown.will be interesting to see what it will be next month!!!on the other hand both me and partner havnt been working for five weeks so we've lost a lot of income.the supplements we got went straight to terminal tax.now for next months provisional tax.

No mortgage.No loan. No car finance. No credit card.

Guess how much I regret that right now?

Ditto - apart from that? keep your health, it's much more important than wealth.

You must be old.

Mortgage 1.5x annual household income. A credit card with $0 owing, handy to have for any reasonable unexpected expenses/protection for internet purchases, gives 6 months interest free over $250. I think the annual fee is $50.

I predict April will be much worse.

So nationally we lost a chunk of income but haven't relied heavily on credit cards to see through those predicted temporary cash flow problems? Suggesting that a lot of the prior credit card spending was entirely discretionary.

So we were in lockdown for about 4 days in March and people were stocking up .

We will be in lockdown for the whole of April , and people dont know whats going to happen next , so they will keep their wallets firmly shut

Expect credit card transactions to fall off a cliff in April

There's a lot more than people can order, in fairness. A bunch more computing and electronics, photography, music etc. People seem to have been getting their creative juices going over the lockdown too.

ANZ said oh noo, darn I should reduce those ceiling interest and alas just sent out memo to customers before covid19 to waiver the card fees - I must recoup this back, lend more to Kiwis to buy properties.. now how to entice them..? think think think..remember, 'when there's a will there's a way'.. think think think.