Hannah Lynch looks for signs of gender equality in the workforce and has to squint to find them; instead she gets a five-point lesson in how to avoid the usual money mistakes

Hannah Lynch looks for signs of gender equality in the workforce and has to squint to find them; instead she gets a five-point lesson in how to avoid the usual money mistakes
7th Jul 11, 5:36pm
by Hannah Lynch 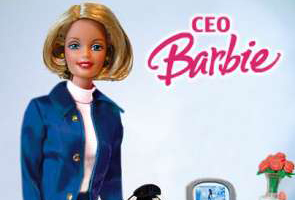 Barbie is the ultimate girl's toy.

When I was little girl I had a generic Barbie doll; she had blonde hair, blue eyes and wore a pink dress.

Today, Barbie's American manufacturer Mattel sells "computer engineer barbie" or "princess tea party barbie" but what I really would have liked when I was eight would have been "corporate exec barbie.''

Despite an increased female presence in the workforce over the past fifty years, women are still not widely perceived as corporate executives.

Historically speaking women have had as hard a time breaking glass ceilings at the workplace, as they have shedding the image that they have only a token place at the boardroom table.

Therefore, I wasn't surprised to find that out of the 150 ultra high-net worth individuals profiled in the National Business Review's 2010 rich-list only three were women. With the 2011 list due out at the end of the month I am not hopefully that there will be a significant improvement in the numbers.

Maybe it is about time Mattel caught up and sold "corporate barbie."  It might have the effect of spurring more young women to strive  for a spot at the head of the boardroom table, instead of being an bejeweled accessory to male corporate tycoon.

Young girls can pick out barbie's designer suits in preparation for climbing their own corporate ladder.

I asked why women were are still lagging behind men when it comes to money. She identified five financial faux-pas.

Sutherland's number one piece of advice for young women setting out to make it on their own, without relying on a male for financial plan,  was to insure themselves.

New Zealand Institute of Financial Adviser's president Nigel Tate agreed that both men and women need to insure themselves but suggested that financial success was also about one's ability to balance public and private life.

"There is value in maintaining thought and financial independence from your partner."

Tate said women need to have the ability to generate their own incomes especially since there are clear issues around the funding of retirement because women live longer.

I asked Tate what advise he would give to an aspiring "corporate barbie" who has dreams of making her millions.

He said, it is important to have clear business objectives with a tight focus. However, you also need to be able to adjust to the environment around you and maintain the ability to be flexible.

From that perspective, he did not believe gender made a big difference.

"In all honestly I don't see a great deal of difference in the creation of wealth between men and women. There is no gender bias to financial success, the process is the same either way - you have to work damn hard!"

Boys, I'll race you to the top and hopefully by the time we get there Mattel's "corporate barbie" will be rolling off the assembly line. I'll see to it.

Women are excellent managers and facilitators. These characteristics are advantages for them. When it comes to managing financial matters, women should really be efficient for them to saved from financial problems. Having credit cards with them would be very helpful as long as it's use is just right and balanced but if ever you get dependent on your cards, you can navigate out of the forest of credit card addiction with sound tips. I read this here: How to break your credit card dependency.

That could prove an advantage, Ivan! A  friend of mine worked for a company that had to 'downsize', so they sacked the male net-surfer ( who was paid more) and allocated his tasks ( minimal that they were !) to her, and gave her a 50% pay rise. She is doing the job of two people ( easily!) for the price of one and a half, but the joy is - that she still has a job and more pay.

Not always actually. While we were both employed (by private companies in France, the UK, NZ), I have always been paid more than my husband to do the same job with a similar level of experience.

I put it down to a nice smile (just kidding, although I suppose being a woman in a male-dominated industry can be an advantage sometimes).

As for "out of the 150 ultra high-net worth individuals profiled in the National Business Review's 2010 rich-list only three were women" - Maybe women are simply smart enough to aspire to things other than money and power, who knows?