Instant Finance's biggest loan is to its CEO Richard de Lautour at a much lower rate than the 29.95% it charges customers

Instant Finance's biggest loan is to its CEO Richard de Lautour at a much lower rate than the 29.95% it charges customers 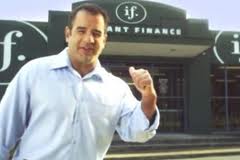 Instant Finance, which charges nearly 30% interest on loans to customers, loaned NZ$453,000 to its chief executive at just 7.62% in what is the company's single biggest loan.

The loan, disclosed in the personal lender's annual financial statements, was made so CEO Richard de Lautour could buy shares in Instant Finance at a discount to fair value through an executive share plan designed to provide a long term incentive for de Lautour to stay with Instant Finance. The firm, which has its headquarters on Auckland's Great South Road, is 10.3% owned by its key funder Fortress Credit Corporation.

This follows the targeting of Instant Finance and Jones by Wellington community group, Debt-Free Newtown, which is calling on Jones to withdraw his celebrity endorsement from Instant Finance and its high interest rates, and to lend his support and name to a more "creative and constructive'' means of helping the poor cope with money problems. See Amanda Morrall's story here.

Instant Finance, which has 19 branches spread between Kaikohe and Christchurch and plans to expand during its current financial year, loaned de Lautour NZ$453,000 at 7.62% to fund the share purchase. The loan is due to be fully repaid on March 31, 2012. During the year to March 31, 2011 de Lautour was charged NZ$39,000 in interest, and as of March 31 this year the balance outstanding on his loan was NZ$507,000. Instant Finance has an option to reacquire the shares or require de Lautour to sell the shares to a nominated third party at a 25% discount to fair value.

The financial statements don't specifically break out de Lautour's annual remuneration but they do disclose that key management personnel, being the two executives with the greatest authority for the strategy, direction and management of the company, were compensated to the tune of NZ$515,000 in the March year, up from NZ$456,000 the previous year.

Mark Barnard, a member of Debt-Free Newtown, said it was interesting that de Lautour was happy to accept 7.6% for himself while taking 30% from "the vulnerable".

Recipient of the company's biggest loan & a Bonecrusher link

The loan to de Lautour is Instant Finance's biggest, worth the equivalent of 2% of the group's equity, or 0.5% of its gross loan receivables. Instant Finance specialises in personal loans of between NZ$200 and NZ$20,000 to what de Lautour describes as "needs based" borrowers rather than people borrowing for "aspirational" purposes.  See more on how Instant Finance operates in this Double Shot interview de Lautour did with Bernard Hickey last year.

The company's financial statements note that the weighted average interest rate on its loans is 29.74% and that it pays, on average, 11.38% to Fortress for its wholesale funding.  Of a NZ$45.406 million facility with Fortress, NZ$24.594 million was undrawn at March 31. Instant Finance also has NZ$8.605 million worth of redeemable preference shares on issue paying an average interest rate of 13.82%.

Instant Finance's major owners are Auckland's Nausbaum family and Peter Mitchell, best known as owner of the famous race horse Bonecrusher. Fortress gained its 10.3% stake in October 2008 with the NZ$1.2 million it paid offset against a NZ$1.2 million facility fee it was owed through a NZ$70 million wholesale funding facility it had provided to Instant Finance. Shareholders received dividends of NZ$2.636 million, or 20.2 cents per share, for the March year, up from just NZ$115,000 in the previous year.

In a recent shareholder update de Lautour noted a range of highlights for the year to March 2011 including:

* Impaired asset expense reduced by 36% to NZ$1 million from NZ$1.6 million, and loan arrears continued to reduce over the reporting period.

Asked on TV3 by John Campbell whether he thought charging interest rates of 29.95%, with real effective interest rates above 30% in some cases, was a fair deal or whether customers were using Instant Finance simply because it would give them money, de Lautour said: "I totally disagree with that. We're strong advocates of responsible lending."

"We're supporters of the initiatives that are going on at the moment, we're supportive of the review of the CCCFA Act (Credit Contracts and Consumer Finance Act), we're good corporate citizens, we pay tax. This company is 40 years old, it has never missed an obligation in its history. And I think you'll find, if you surveyed the 26,000 current customers that we have, you'd find 25,900 of them would be very strong advocates of this business."

Man, this story is small-minded, tall poppy bullshit at it's finest!

So what if De Latour the CEO of this well run company borrowed money at a better rate than they lend out at? Where is the story in this?

There is nothing wrong with this action of De Latours and Stacey Jones is free to be paid for his services of endorsing a product that provides bridging finance to those who can't readily access funds.....bloody credit cards from the Big 4 banks only charge 7% less than Instant Finance.

I totally agree Rob of the North - Vaughans article smacks of envy. I say good on Instant and Lautour. He has put in the time, his capital, and fronted when required. Instant is essentially now private, they can do damned well what they like.  The reward is well deserved.

...again..so what has this got to do with Instant finance who mainly lend to polys in South auckland so they can get a life or bury their rellies back in Samoa?

jeez,mom, you're fruit loop..how can you seriuosly believe that Latour etc are part of the Illuminati or the Bilderberger Group..nutter!

i fail to see what global banking giants have to with little old Instant Finance who are the only finance co. not to buy inbto the Govt. guarantee in the last 3 years, always turn a profit for their shareholders, have 25000 loyal,happy clients etc.

you may be right in your 'big picture ' analysis but you've gone way off message here in your rantings about conspiracies...this is only a kiwi company doing it's thing within clearly defined parameters...next thing you'll be saying they're in bed with BOS?

stick to your knitting!!

Iain - with all due respect what a load of crap!

Why is the media picking on only Instant Finance - small potatoes.

I guess they are too scared to fully look at the charges of someone like GE Finance -  who now has a monopoly on virtually all hire purchase in NZ, and charges approx 27% Interest (after the enticing 0% period).

GE must have the largest consumer finance book in NZ.   Also they do not sent statements to personal loan holders (they try to charge customers to get a statement!) . This is from a global giant ...      And look at their dealings and relationship with Blue Chip ....

Instant Finance is a privately owned company largely by the Nausbaum family who are Jews...so off you go now Ian..chase the balley..maybe it'll take you all the way to the Zionist , Rothschilds et al...i've heard they've been hanging out to get to those polys in south auckland for a long time...paranoia is a japanese word for good bye and that's what i say to you now, mr parker..goodbye...and make sure you take a torch to bed each night as you never know who might be under it ????

I knew you'd love the opportunity to go off another tangent when i mentioned the Jews...be a good boy and quit while you're not ahead  !

Nice broo ha ha fellas. It's like people who classify themselves as atheists. What they are actually saying is, they know for a fact there is no god (of any sort) , they are in fact stating that they know everything.
Bit limiting I would say, kind of the like the ruling elite argument you both danced around. Rob states he knows everything, & Ian wants to understand more it would seem, but avoided the big fight on offer.
Punch on

may as well make me a cad and a bounder while you're at it, Ian ?

you amaze me how you keep ignoring my simple message which is that Instant Finance of Auckland are just a finance co. lending money, largely to Polynesians...and as far as i know, Rothschild is not a Polynesian name?

I Feloffthesofa, maybe, but not Rothschild....