Interest rate hike would hit the pocket of 40% of the population, Dun & Bradstreet says

Interest rate hike would hit the pocket of 40% of the population, Dun & Bradstreet says 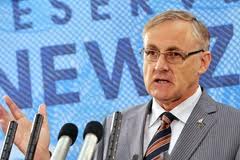 Hiker? Most economists now expect Reserve Bank Governor Alan Bollard to lift the OCR before the end of 2011.

With most economists now predicting the Reserve Bank will hike the Official Cash Rate (OCR) before year's end, credit reporting agency Dun & Bradstreet says 40% of New Zealanders expect a rise in interest rates to have a negative impact on their finances.

This is one of the findings in Dun & Bradstreet's latest Consumer Credit Expectations Survey. The survey, conducted online in June  through interviews with 1,010 adults aged 18-70 years, probes peoples’ expectations for credit usage, credit history and spending in the September quarter (July, August and September).

The survey was, therefore, conducted before Statistics New Zealand this week said inflation rose 5.3% in the year to June, above market expectations of 5.1% and ahead of the Reserve Bank's target of keeping inflation between 1% and 3% on average over the medium term. Some economists are now picking the Reserve Bank to increase the OCR from its current 2.5% as soon as October, with others picking December and in some cases next March, with such a move set to flow through to home loan interest rates.

Dun & Bradstreet general manager John Scott said a rise in interest rates was expected to negatively impact people across all income levels, with those in higher income brackets (above NZ$50,000 per year) to be the hardest hit. Scott said more than half the respondents with annual salaries exceeding NZ$100,000 expect their finances to be adversely impacted by rising interest rates.

“This negative sentiment is consistent with the Reserve Bank’s decision not to raise the cash rate until the economy has stabilised," Scott said.

"At the moment, household expenditure is weak and debt is high, both key signs that the economy has not fully recovered from the recent natural disasters."

"These demographics not only intend to avoid spending big in the coming three months, but also intend to delay any major purchases. They are also more likely to have difficulties paying off their credit cards," Scott said.

Nonetheless the survey overall reveals the "cautious spending habits" of Kiwis in the post-Global Financial Crisis world, with 77% of survey respondents likely to fund any major purchase during the September quarter from their own savings. That was well ahead of those planning to use a credit card, interest free deal, mortgage or personal loan to pay for a major purchase.

Dun & Bradstreet said other key findings from the survey were:

• 17% of people expect higher household debt levels, down two percentage points from the June quarter of 2011.

• Only 5% of respondents intend to apply for a new credit card in the next three months, a stark contrast from 27% in the June quarter of 2011.

• 29% of people expect to encounter difficulties in meeting their credit commitments.

• 27% expect to hold off making a major purchase in September quarter 2011, up five percentage points since the June quarter expectations.

• 32% of people expect to use a credit card for otherwise unaffordable expenses, down 4% year-on-year.

(Update adds detail on September quarter spending plans from 2009 and 2010 and link to graphs).

Rising rates hurts those in debt....but reward those who saved...nobody forced them to borrow....hard bloody luck.

Savers should be rewarded with higher rates on deposits...which they can spend or save.

Exactly they've had almost 3 years of extraordinarily low interest rates for a crisis that has been largely overseas so far.

If the dollar goes up, like we know it will, then it's up to the government to actually start taking seriously some of the other measures that have been mooted to help control inflation, instead of dismissing every idea that comes up.

Just using interest rates by themselves have proven to cause other issues, and need support from other measures.

They will need to either look at capital gains taxes, capital controls, land taxes or something else to compliment interest rates.

Hit them as hard as you like, I am sick of subsidizing the borrowers through low interest rates. The higher the rates go the better.

It is about time the idiots learned to save for things they want.

No mention of the other 60% in the survey, the savers. I think that the commentary indicates that John Scott is in the 40% camp, a borrower.....

So, as a consumer who has cut back on everything to the minimum, when my interest rates go up, how do i cut back more?  i drive the minimum, buy food on special don't go & bid up the price of houses, or buy expensive cars or meals out etc.

Dr Bollard, how can i reduce demand to help reduce inflation anymore?

"So, as a consumer who has cut back on everything to the minimum, when my interest rates go up, how do i cut back more? "

Its only a problem if people budget interest rates at current levels, which happen to be the lowest in history....that a common sence thing top do?..Espec when long term ave is about 8.5%...

Sry, as with most other comments, no sympathy for over leveraging.