How much are you worth, really? And why is it important.

Personal Finance
How much are you worth, really? And why is it important. 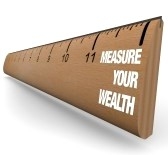 A key part of retirement planning is knowing your net worth.

Instinctively most of us think we know what we are worth. The common mental measuring stick is our contribution to society and the material stuff that we have accumulated. By that calculation, there are a lot of millionaires and paupers amongst us. Here, the tendency is for people to either grossly over-value or under -value their worth and wealth.

However, your net worth should not be confused with feelings of self-worth or the gadgets you have. Net worth is strictly numeric and is, in theory, divorced from ego, emotion and fantasy and therefore objective.

How do you figure out your net worth?

Simply put, your net worth is the total sum of your assets minus your liabilities. Assets that figure into the equation are all the things you own that could be sold off and converted into cash. So that includes stocks, bonds, property and superannuations schemes. Personal property, including cars, jewellery and artwork also count as assets but for the purposes of calculating net worth are best left out of the equation. That's because the real monetary value of the things that we own is rarely in line with expectation of what we think they are worth.

Unless you own a Matisse, a collection of Rolls Royces or a cellar full of vintage wine, it is probably best to exclude personal belongings from your asset sheet.

Liabilities are the debt you owe. Typically that would include mortgages, unpaid credit card balances, hire purchases, personal loans and I-owe-yous.

Your net worth is what you are left with when you deduct all your liabilities from your assets.

Why does it matter?

Although your future wealth could go or up down, knowing your current net worth is useful to the extent that it helps you to plan for the future.

Financial advisers often describe net worth as a financial GPS in that it can help you find your way.

Comparing your net worth with someone else's may not be that helpful particularly if you're comparing it with an UHNWI -- an ultra-high-net worth individual whose wealth is beyond the realm of realistic attainment.  Still, it can be useful to know where you stand in relation to others.

The point of knowing your net worth is not to inflate or deflate your ego, but to help you figure out how far or close you are bridging the gaps between where you are at now and where you want to end up.

Unsurprisingly, partnership has its perks.

The Retirement Commission, in its most recent report on the net worth of New Zealand, refers to a 2001 Household Savings Survey (HSS) which found that non-partnered individuals had an estimated net worth NZ$91.112 billion, whilst the total for couples was an estimated NZ$275.867 billion.

And Statistics New Zealand, in a separate report on the same subject, found that net worth increased as couples grew older.

The same trend holds for single-parent families however relative net worth is dramatically lower. Looking at the graph below, the median net worth of a  single parented family with children age 13-17 is around the NZ$50,000 mark, whereas the two-parented equivalent had an average net worth between NZ$300,000 and NZ$600,000 depending on their age.

Partnered or unpartnered, education is a factor working in favour of a higher net worth.

By some estimates, the net worth of a university graduate is double that of a high school graduate. Being self-employeed is another economic advantage. Self-employed individuals reportedly have triple the net worth as their employed counterparts. (To see more net worth projection read this article on Investopedia.)

How much you should be worth will depend on your objectives and lifestyle goals however Thomas Stanley and William Danko, U.S. authors of "The Millionaire Next Door" (1998), came up with this formula as a guide:

On that basis, the net worth of a 20-year-old would be $50,000 which seems improbable given they would have barely graduated from college.
However, moving up the age and income continuum, the numbers become more realistic, or at least fine in line more close with known net work average.
Below is a benchmark for consideration.
Again the figures themselves are meaningless without knowing where, why and what you are trying to achieve.

Do you know where you are going?

Savings investment How To Guides retirement planning net worth

Here is a thought, lets encourage people to be self employed.  This is the heart of investing in a company.  If self employed people have triple the worth of those in a job, why is society and our education system based around getting a job?

I agree, but you might find that a lot of people actually like the "cosiness" of employment - knowing a salary will come in every month, knowing how much, not having to find contracts themselves and letting their employer do that for them, having guaranteed holidays & sick days etc.

In comparison, being self-employed is much riskier and hard work, and not everybody would have what it takes to do it . The reward is worth the trouble though.

Exactly...Im no longer interested in being self empolyed, the 20th month, staff,  and all the trimmings that go along with it....and work it out on an hourly rate basis...sometimes the min wage doesnt relate.

Its like the case for more women in top jobs...men and women, regardless of the PC BS think different, and generally have different prioties, maybe there are not the same number of women interested in 20 yr days weeks away from family, that top jobs require? Inspite of what the activists say.....the same applies to self employed it does or doesnt suit each individual.

The 'Millionaire Next Door', notwithstanding it was Jo Di Maggio's favourite - is a silly book in many respects written with little balance. It effectively restates the general principle that wealth really boils down to slow and steady wins the race (combined with some well considered frugality).

With respect to the equation the book gives, as with everything from different jurisdictions the equation is not apples with apples . For example, this book is likely to have considered American 401k and particularly Roth IRA accounts for the equation above to make any real sense. These accounts are often taxed in different ways, including Roth IRA  being treated very generously for tax. Sometimes tax is only applied at point of withdrawal so net worth can look relatively large early on. If you watch Suze Orman and wonder how the retirement accounts of people in their 30's are so huge, there's part of the answer.

The net worth of Americans with retirement accounts can appear high to Kiwisaver if the two are compared side by side, but it's apples with oranges in this case.

Negative net worth! Fantastic. I love being in debt!

(I'm one of the more financially responsible of my friends)

I dont think cars, furnture and stuff should be included...stuff that depreciates and eventually has no market value

Furnture that is collectable antque, a classic collectable car, yes..covered in the description above.

Student loan...would not count that either...as one recieves wages that is automatically taken care of....speak to any person who is paying off.."OH just forget about it, just consider my nett pay is after tax and loan"  And the other one where people have finished paying it off "Got a letter the other day, my loan is paid off, gee gone quick, lost track over time, now they owe me money .."

But the person who bitches about it, trys to advoid, they are the ones who have issues......No student loan is about as relivent as adding ones future PAYE as a debit, in practice.

Don't worry about student loan? Wouldn't consider it as debt?!?!

No wonder our economy is down the crapper.

Well I debate a reason...others just disagree with no reason...

Yes Growing student loan as a deficit on national economy is an issue, but the other  end, as this articule is the subject of, the end user is a totally different kettle of fish.

Asuming a person with a student loan, who has become educated, and assuming they have some common sense, then it is not an issue

And we have substantual student loans.