How to kill your grocery bill; Tracking every penny - is it worth it?; Alleviating your personal finance frustration; This is what's wrong with America according to Ramit Sethi; The 40-year-old cat woman

How to kill your grocery bill; Tracking every penny - is it worth it?; Alleviating your personal finance frustration; This is what's wrong with America according to Ramit Sethi; The 40-year-old cat woman 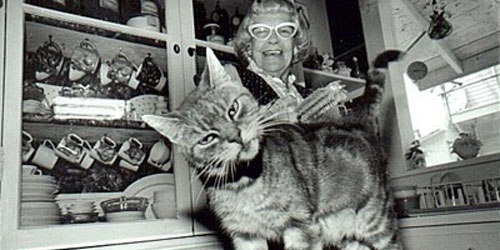 1) Trimming the fat from your food bill

My last grocery excursion cost me NZ$175. I came out with a cart full of food that I expect to last me and my two lads a week with an extra run here and there. I reckon I average $200 a week on food. You can imagine my horror after reading Mr. Money Moustache's latest blog condemning excess food spending in the U.S. Mr. Lean reports that he spends $US80 a week to feed his family of three! That compares to the average U.S. family of four which spends US$944 a month. As I used to live in North America, I can confirm that food costs there are much lower than New Zealand. Still, what I wouldn't give to spend $80 a week on my groceries. I need to move to a commune.

There are differing views in the personal finance blogosphere about the merits of budgeting and counting your pennies. Some argue that frugality and all that time spent monitoring and tracking your money is a waste of time and that really you're better off growing your income by leaps and bounds. Others maintain that all those dollars and cents really do add up and more importantly that their monitoring speaks to habits and awareness, both of which are essential to growing one's wealth in a sustainable fashion. This blog by onemoneydesign.com argues that the truth lies somewhere in between. I would agree. Depends on the individual.

It's easy to get down about money. Expenses invariably crop up that blow the budget or you give into consumer temptations then berate yourself for it afterwards. I mentioned before my 24-hour policy for items over $100? That helps. Trent Hamm, writing for The Simple Dollar, explains his strategy for coping with personal finance frustrations and keeping on track here.

4) This is what's wrong with America

Ramit (the machine-gun) Sethi had me cracking up this morning after watching his latest video blog on the personal finance of buying a car. Ramit, whilst responding to one of his follower's questions about upgrading his still unpaid for car, launches a vitriolic attack on the reader and other car obsessed consumers for their free spending ways. Ramit abhors the annual car upgrade practice, particularly those still under finance. He argues that you should hang on to your car for an average of seven years. I hate to admit Sethi is right (given his demeanour and insults) but the man has a point.  My second-hand Honda Jazz (one of the most fuel efficient cars on the market) is humming along and I have no reason or plans to upgrade to a Porsche Cayenne any time soon.

Canadian economist Marina Adshade is up to her old tricks debunking urban myths with hard facts. In her latest, Adshade takes a shot at the notorious NewsWeek cover story from 1986 which condemned single women over 40 everywhere to a manless world of books, cats and DVDs. The article famously suggested that women over 40 had a better chance of getting killed by a terrorist than remarrying, a statement that was viciously recycled by Hollywood and the mass media. The truth of the matter is that a very large proportion of the women (of various age brackets) that Newsweek had doomed (relationship wise) ended up repartnered. Never let facts get in the way of a good headline huh? Here's an excerpt.

The fact that the article forecast that the probability of a single 25-year-old college-educated woman ever marrying was only 50%, in a period in which over 90% of women married at some point in their life, should have been everyone’s first clue that there was something horribly wrong with these predictions.

Thanks to the passage of time, and the availability of U.S. Census data, I can tell you now how many of these college-educated women who had dared to postpone marriage into their 30s and their 40s fared on the marriage market in the years following this publication.

Thanks Marina for your unique economic perspective and insights as they relate to real life. I'll let you know if wedding bells every ring again for this animal loving spinster.

To pinch ones pennies is the start of a life long habit of looking down.

Great Quote. Thanks for your questions today Ralph. Amanda

I can claim modestly that one as my own ;)
He can claim with such modesty because he so much to be modest about.
That one is Churchills.

Online grocery shopping reduced our weekly shop cost, even after the delivery fee. Mainly because I pre-plan meals so we only buy what is needed (way less "I like camembert" moments).
I order veggies from epicurean.co.nz (apart from being a customer I have no connection to these good folk), and these also come delivered to our door. Any meat required comes from Urbanharvest .co.nz (we'd eat meat three times a week or so). Eggs from local provider.
If we made our own gin I reckon we'd reduce our costs quite well.

Good tip. Cheers. When you start making gin lemme know, I have an abundance of limes looking to take a bath in gin.

#1 - grains aside (and we could replace them with spuds) we could probably go a year without visiting a supermarket. It takes time, and not so long ago, you'd have been better off earning/spending. The graphs are converging, and will clearly cross - soon it will be worth growing rather than earning.

Communal?  Why not a group-owned allotment? Heck, the time is close where 10 partners in say 5 acres, could pay one person to tend it.......

Nobody mentioned that the females who were intelligent enough to think for themselves, may have questioned 'marriage', and had the confidence to live with, and love, a partner without the need to copy the herd.  What percentage were eliminated by that exclusion? My partner of 30+ years certainly was.

But but what about the weaving, the painting in oils and the masters degree course in govt spin...surely those are essential to the future wealth of the nation!
"Students at Canterbury University, has cancelled a planned protest today.
"We're planning something a little more direct.''
The university announced last week it wanted to make nine fulltime equivalent staff redundant and cancel its theatre and film studies, American studies( oh no not the American studies), and cultural studies programmes.
The university has asked the government for an extra $150m over the next eight years to meet the funding shortfall created by falling numbers, and a 500 per cent increase in insurance premiums.

Not much different from witchcraft - eye of newt, sleight of invisible hand, now you see it now you don't.

Growth forever - a bit like teaching that the earth is flat.

Ahhh yes, but like everything in life it pays to have balance. So you need a few bad habits in there to make life more fun :-P