Janine Starks ponders the parental dilemma of pocketmoney and argues that "we are a bunch of irresponsible miserable gits."

Janine Starks ponders the parental dilemma of pocketmoney and argues that "we are a bunch of irresponsible miserable gits." 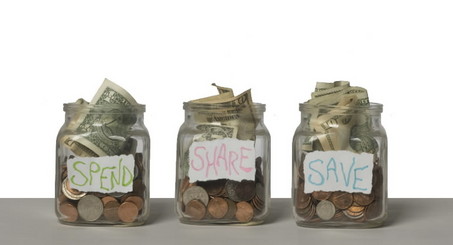 We are thinking of giving our children pocket money, but we have different opinions on things.  For example, how much do we pay; do we make them save some of it; and are they too young for bank accounts (4 and 7 years old)?  The four year old doesn’t understand money yet, so should we even bother?  My wife thinks they shouldn’t be paid to do the basics like clearing the table and making their beds.  I’m dead keen to have a list of jobs that need doing, as they need to learn that money comes from working and doesn’t grow on trees.

From the scary file of money-surveys, it pains me to report that two percent of children really do believe money grows on trees.  There will be a sigh of relief when it’s noted these are British children, but I wouldn’t be too quick to assume Kiwi kids are any less daft.

Regionally, the British numbers get worse.  In the South West of England, four percent believe trees deliver the cash (that’s the Bristol and Bath area where Paul Henry hails from).  In Wales, nine percent of children credit the tooth fairy.  Almost 30 percent of Scottish kids think money comes from the government.  That’ll be the fault of their free tertiary education, as the national average only has 18 percent of kids staking their bet on politicans supplying the cash for groceries.  ‘Mummy’s purse’, ‘Daddy’s pocket’ and the ‘Cash Machine’ rate pretty highly too.

If kids don’t understand that you go to work to earn money, whose fault is that?

I often hear opinions that you shouldn’t give children pocket money until they understand what it is.  But you can’t teach without doing.  We spend years reading books to babies and toddlers, when they don’t recognise the words.  But early reading teaches good habits.  So what is wrong with popping coins in jars or visiting the bank and telling kids what’s happening there?

My four year old nephew was taken to get a bank account a few months ago.  He was tired, grumpy and the lady was taking far too long for his liking.  He eventually yelled “I want my bank account NOW”.  In his mind, something was supposed to appear.

Luckily ANZ stock some plastic pigs and one was delivered to his majesty’s liking.  Mum explained his money would go in the pig and they would bring it back to give to the lady.  He promptly yelled “we will NOT” and was dragged off to discuss his manners and that money in the bank isn’t lost.  It won’t sink in until he makes a deposit and withdrawal.  This is a boy who can tell me what an osophogus is (he probably learnt that off another four-year old) and which biscuits are on special.  There are no flys on him, so he’ll figure out the workings of his bank account in 5 minutes flat – it just needs to be used and talked about.

Pocket money is on the rise

Around the world, 2011 was the year pocket money levels staged some recovery.  In Britain, the Halifax Bank annual survey reported a rise of six percent after a seven-year slump.  An average level of £6.25 a week was paid (that’s $12 a week).  In New Zealand the Cartoon Network produced a survey showing the weekly average was $10.26.  A survey two years ago revealed $9.18, indicating a similar 6% per year rise.  Perhaps pocket money is the new leading indicator that economists should be following.

Where we have some catching up to do, is on the consistency front.  In Britain, 83 percent of parents give pocket money regularly, but in New Zealand only 56 percent cough up each week.

Given the $10 weekly average across 4-14 year olds, you won’t be paying your 4 year old anything like $10 a week.  One simple rule is to convert their age into a dollar amount.  It takes the argument out of increases.  For many families this won’t be affordable, but even small amounts of 50 cents or a dollar, can teach about savings and responsible spending.

Doing household jobs is a common requirement of pocket money.  One idea is to make a big poster as a family with all the jobs written on it.  You can choose two or three things which have to be done for no money at all.  Each child then takes turns at picking the things they need to do.  Add on all the things Mum and Dad do for the family – school drop offs, weekly groceries, paying bills, gardening etc.

Worryingly, in both the UK and New Zealand, boys get more pocket money than girls.  Work-place gender bias obviously has deep roots.

75% of kiwi kids are not encouraged to save

A few years ago, AMP did a survey in New Zealand which indicated that just over half of parents give regular pocket money.  Of that group, half expected children to save some of it.  The retirement commissioner made warm comments congratulating the parents who encouraged savings.  It’s an old trick; encourage the good and ignore the bad.  But come on, we need to get real.  This survey actually shows we are a bunch of irresponsible miserable gits.

Work out the maths – only 25% of our kids are being encouraged to save regularly.  A jaw-dropping 75% are not being taught regular savings habits.  It’s appalling.  And we scratch our heads and wonder how our attitudes to debt went wrong.

My opinion is pretty clear – yes they should be saving some of their pocket money and you should be making a big deal about it.  Think about a level around one third of the money.

Apparently ‘money’ is one of those taboo subjects which families rarely talk about.  It comes third on the list after sex and death according to another British fountain of knowledge.  Laugh heartily, but how many kids ever hear about mortgages, shares and savings accounts at the dinner table?  Children repeat what they hear, so money is a post bedtime whispered discussion.

The new generation of kiwi parents have a proven ability in over-coming social taboos.  Their four year olds use the correct anatomical terms of private body parts, loudly and proudly in the local cafe, while they smile and nod.  A lot of effort is put into making sure they know babies grow in a tummy, but not so much effort in reinforcing that you go to work to earn money, we pay a mortgage, or that bank accounts grow with interest.

Given how often kids see wallets and cash cards in a day, we can’t claim there is a lack of opportunity to inform and teach.  Lets make the effort.

*Janine Starks is Co-Managing Director of Liontamer Investments. Opinions in this column represent her personal views and are not made on behalf of Liontamer.  These opinions are general in nature and are not a recommendation, opinion or guidance to any individuals in relation to acquiring or disposing of a financial product.  Readers should not rely on these opinions and should always seek specific independent financial advice appropriate to their own individual circumstances.

Money from trees...?  Paper money is so yesterday.  In this new cashless world, money comes out of thin air!

The more accurate phrase, would be: Money is underwritten by trees (and other resources).

It's not just parents that overall do a poor job of teaching children about money. Our school system is severely lacking when it comes to educating kids about money and economics. We have special modules teaching them how to eat healthily and protect themselves from the harsh UV rays of our sun, so why not introduce modules that teach fiscal responsibility, how money arises and is used, what is involved in running a business? I would love to see that introduced in schools.

The 40-year-old fashion designer, [Stella McCartney] who has two sons and two daughters by her husband, Alasdhair Willis, makes her point by quoting a recent Hollywood film in which George Clooney plays the heir to a fortune who refuses to allow his children to spend their inheritance.

“What was that line in The Descendants?” asks McCartney, who has designed the kit for Team GB at the London Olympics. “ 'You give your children enough money to do something, but not enough to do nothing.’ My husband and I looked at each other during that film and we were, like, 'That is the ultimate.’”

Terry Baucher "The Week in Tax: 'To save capitalism, we must help the young'"