Looking for money in all the wrong places; Top jobs for 2013; Is your smartphone eating your wallet?; Inheritance spending; P2P lending

Looking for money in all the wrong places; Top jobs for 2013; Is your smartphone eating your wallet?; Inheritance spending; P2P lending 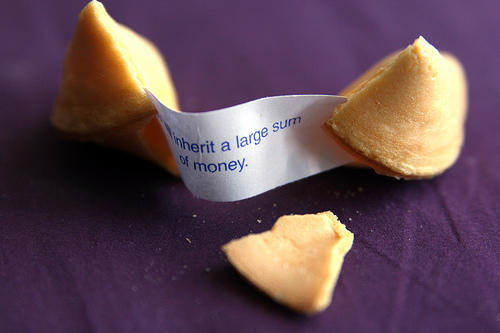 U.S. personal finance guru Ramit Sethi tears down the American dream and exposes all the empty holes in the conventional plan that says when you a) get an education b)get a good job c)get a wife or husband d) have 2.5 kids and house in suburbia (or a house anywhere for that matter) you'll be happy. The problem is, as Sethi correctly points, out far too many people take this well trodden path without questioning it and then arrive at their destination unfulfilled in mid-life.

Some good points raised here. Ramit's grown on me or maybe it's just because he thinks scrimping and saving and cutting out lattes is a waste of time.

Sethi is big on seeking out opportunities; either landing that dream job (or creating it), negotiating a higher salary, earning money through multiple income streams etc. Forbes Money put together a list of the top 18 jobs most in demand post GFC.  I expect there are some parallels here in NZ. Interesting to see personal financial advisors on the list in 18th place no less.

In theory my wallet should have shrunk in proportion to my smartphone use. Perhaps it's just that I'm not taking full advantage of its capabilities. According to this New York Times piece, developments in smartphones will eventually eat your entire wallet. Great news as far as I'm concern, one less thing to cart around.

According to a recent study out of the U.S. around 50% people of all people who receive inheritances spend about half of it. Lesley Parker, writing for The Age, talks to managing director of ipac financial care Brendan Burwood about what they should probably be doing with that money instead of frittering it.

Regulators here in New Zealand have yet to approve peer-to-peer lending although it shouldn't be too far off. In the U.K., where P2P lending has exploded in popularity as a alternative to using banks for saving and borrowing, the rules are finally catching up with this practice. The Telegraph reports here on how Zopa, RateSetter Funding Circle and Yes-Secure will be regulated by the new Financial Conduct Authority now.

The following video should put the middle class debate into perspective. We live in a land of abundance. Too bad we can't see it.

The surest way to ruin a man who doesn't know how to handle money is to give him some.
George Bernard Shaw

Ok, give it to me instead.

If everything in life is coming your way -- it's because you're in the wrong lane.

The use of the phrase 'the pursuit of happiness' was perhaps the silliest thing that went into the declaration of independence.

But what remains of the american dream is still enough to attract millions of immigrants to their shores.

To live in freedom from despotic rulers of every kind, opportunity for a better material quality of life for you and your children, where the rewards of hard work are given to those who work, the rule of law that offers the chance to own property and protection of it, religious freedom to pursuit whatever ideals your heart may choose.

Ever since puritans boarded boats as indentured servants to the 'New World" to escape persecution America has represented hope for ordinary people.

Under Stalin or Mao not only he but his entire family, or in the case of Mao maybe the village he came from, would all be dead by now.

Yes but the difference with China and Russia is that neither of them describe themselves as The Land Of The Free.

(I assume the Americans meant that ironically, but then they don't understand irony)

Agreed. The US is neither better or worse than any other major power or military/economic empire that exists now or preceded it. The difference is the hypocritical cloak of "freedom and democracy" it wraps itself it, preaching out of the corner of its mouth as it does to its own citizens and other nations what all imperial powers have done before it

yes this article nicely sums up not only the broad range of freedoms that have been sharply curtailed in the US in the last decade or so, but also the breathtaking hypocrisy of the way they roundly castigate other countries for doing the same...

Death to The Great Satan!

In my opinion Mr Stan you are wrong, or perhaps only mischievious.

The idea that so long as a government doesn't "advertise" itself as something it is not it is "better" than one who is hypocritical is both naive and mistaken on three fronts:

Firstly - the statement is founded in a lie because there are no countries that are not hypocrits. This is because people themselves are hypocrits, show me a person who claims not be hypocritical and I will show you a person who is a liar.

Secondly - a country should be judged on it's actions and not on it's advertisements.
If advertisement were king then the world would have beat a door to Communisms workers paradise.

Thirdly - what criticisim of the status quo always leaves out are the alternatives.
Revisionist history states the British Empire was all bad and ignore the fact it doubled life span and halved child mortality everywhere it went.  It also conveniently ignore what followed was not always better.

Whatever our disappointment, or even anger, with the US we should not let it cloud common sense.

#1 conventional plan that says when you a) get an education b)get a good job c)get a wife or husband d) have 2.5 kids and house in suburbia (or a house anywhere for that matter) you'll be happy

Never mind getting a call from 2Day FM, that ^ is enough to make me want to kill myself. Amazing how many people still follow that path, expecting that they will be the ones that make it work. Perhaps American Beauty should be mandatory viewing at every first wedding.

Ha! Brilliant movie. What's so offensive about 2Day FM, I haven't listened to commercial radio in years. Someone did put me onto FBI in Sydney tho, good electronica on Fridays apparently.
Surprised you didn't comment on the landFillharmonic vid Stan, or are you banned from Youtube during work hours still?
A.

Um, 2DayFM - Jacintha Saldanha - the nurse that topped herself due to the prank call, the only news story currently pouring out of Europe as Britains press drag themselves out of the gutter briefly to leap onto a high horse before descending to gutter journalism once again. The two DJs from 2DayFM getting counselling, the parent radio station losing $1 million a day from advertising...

I didn't hear it either because I avoid all Australian media like the plague, and while we aren't banned from watching youtube clips at work it's supposed to be for watching work related videos only, and they take that stuff pretty seriously. I shall view and comment when I get home...

It must be harrowing for her husband and two children to realise that their partner/mum would prefer to kill herself because of her embarrassment over the antics of a pair of cackling hyenas from an Australian radio station , rather than spend another moment of time with them , her family . Sad , very very sad .

well the whole thing is bizarre. She must have had other emotional or psychological problems because a) the prank wasn't even aimed at her, and b) it certainly wasn't malicious and c) the hospital wasn't blaming her nor was the royal family (Charles even made a joke about it the other day, and d) no-one in their right mind tops themselves over an Aussie radio station prank.

Which makes the outcry from the English press even more xenophobic and hypocritical than usual, a reaction not seen since Paul Keating dared to *gasp* touch the queen on her back!

I think it speaks volumes about the UK and the way they think of the upstart Australian colony, and maybe even a touch of the green eyed man at our economic success. Who knows?

Thanks for the video Amanda. Very touching and somewhat poignant. Also it reminded me very much of Goa - the everpresent plastic bags and other rubbish everywhere.

I shall share it on Facebook to annoy those of my friends who are rushing around town because their child must have an iPad this Xmas.