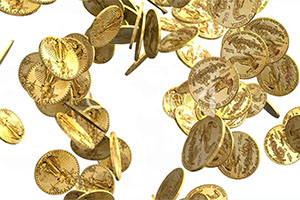 Gold dropped sharply in price today (Wednesday), falling more than US$40/oz and below a trigger point of US$1,300/oz.

Silver prices are down -5% on the day.

These are the largest single-day falls since July 2013.

But market analysts are just guessing when they try to explain why such a sharp fall, and why now.

Among the reasons advanced today are:

- China is on holiday, undermining a major source of demand for the yellow metal. But that holiday ends next week, so the idea is that gold may get some better support then,

- The UK currency is taking a pounding, removing some support from British purchasers,

- Wall Streets acceptance that the US economy is now strong enough to tolerate a Fed rate rise, and that probably means a higher US dollar (which usually means the gold price declines),

- A couple of non-voting Fed members came out overnight saying if they did have their turn to vote now, they would have dissented at the last FOMC to hold rates

- The +19% rise in the gold price since June has been overdone, and a correction was overdue,

- Gold is considered a traditional risk-off, “end of the world” trade and is often bought up aggressively by investors in times of stress. But we aren't anywhere near the end-of-the-world at this time,

- In addition to weak China demand, demand in India is weak as well. Investors there have better options than holding gold, especially after the RBI rate cut today,

- Western derivatives market returns have been poor for gold and as one analysts said today, "people are throwing in the towel". Remember, gold costs money to hold but provides no return other than a capital gain. If investors sense a capital loss, there is little point holding it.

- When prices fall, there are spruikers who jump in claiming "now is a good time to buy" - but this exhortion has been now used far too many times, so it could be generating a counterproductive market response,

- gold-backed ETF inflows were very low in September and that data just came out yesterday, making investors realise demand underpinning from this source is weak. That is important because in previous months, it has been the only major source of support,

- net sales volumes to retail investors in the US of gold and silver coins and bars fell 40 to 50% in the third quarter, according to Thomson Reuters,

- UST yields are rising, and shifting quite quickly to an up-bias, and that undermines the attractiveness of gold for some investors,

- some investors have positioned for a rise in gold prices if Republican candidate Donald Trump wins the US election in November. They are selling options expiring before the election to buy options expiring after November 8. But Trump's falling prospects undermine this trade.

It seems likely that many of these reasons have dawned on gold investors all at the same time, causing a sharp and painful reassessment. The question now is, will the decline be repeated tomorrow?

Follow the technical charts. Gold dropped below it's key support trend line and then gold futures sold off as a result.

It doesn't help when someone (likely BIS) dumped $4B+ last month to deliberately manipulate the price lower.

A few points on the fall in gold (-3.2%), silver (-3.8%) and miners (HUI
-8.9%) today;
Nothing has changed in the physical gold market. Lower prices will entice
physical buying from China and India, especially as the Indian wedding
season and various festivals loom over coming weeks/months. The Chinese are
holiday this week and so unlikely to have any influence until they return.

The paper derivative market (COMEX) where bullion banks determine price is
where things have changed and it is important to understand why and the
drivers going forward.

The cost of carry trade buying fuelled by low and negative interest rates
and importantly the USD/JPY (carry trade) market is driving the selling
today and will likely influence prices over the shorter term. We consider
this is an opportunity.

A few comments on the weakness

1.      The Chinese are on holiday this week, and so a large physical buyer
of gold is removed from the market. i.e. great time for the bullion banks
(who dominate the COMEX, where daily prices are set by paper derivatives,
not gold) to pounce and they have. Remember these bullion banks are very
short in the futures market and will be looking to cover before 2017 and the
next leg of the bull market. As the specs sell, they will buy.
2.      Gold, silver and miners have been correcting in recent weeks and are
now all below their respective 50dma's. This is typically a bearish trading
configuration and makes them vulnerable to bear raids like today.
3.      The important technical break of the 2016 downtrend in the USD/JPY
(see chart below) has been used as a reason for specs and HFT's to
sell/short gold, silver and miners. This important carry trade cross rate
has dropped 20% in 2016 and has fuelled considerable western buying in gold.
The bullion banks have successfully reversed this trend (buying) for now,
although it is likely to be temporary.
4.      While the break in this trend is viewed as negative short term and
will be a reason for the financial media/commentators to become even more
bearish on gold in the short term, this is likely to be a correction over a
maximum of 1-2 month period, rather than the start of another bear market in
gold
5.      Now that the downtrend in the USD/JPY cross rate
has been broken, the cross rate could now move back to 1.05 or 1.08 in a
bearish correction fuelling more weakness (although I consider most of the
damage has been done already), before embarking on a new downtrend. Based on
this we could see a bit more downside in miners from here - perhaps 5-10%,
and whether this occurs over coming days (before the US non-farm payroll
release on Friday) and that is the low, or whether the release on Friday is
a catalyst for a bounce first, and then a final low in November I don't
know.
6.      What I do feel very confident in saying is that this next low will
be the final major opportunity prior to the 2017/18 bull market.

The certainty ("very confident") of gold traders (sellers) hardly ever comes to pass, and when it does, it can be explained by pure chance. In fact, anyone "very confident" about the future needs to be treated with considerable scepticism.

It is dangerous to try and find 'facts' to fit a pre-determined belief. I Don't think any trader should try and foist those unfounded ideas on others, especially the gullible.

On which asset class have you made +20% this year?

David, For the record I am not a trader, merely prefer a buy and hold strategy. When referring to a bull market the 20% YTD Gold return is certainly an excellent return when in a long growth/Low return world as we are at present. Also, if you were considered enough to buy virtually any Global Gold Miner at the start of the year, than going by the NYSE Arca Global Gold Miners Index than you are up 82% YTD to 30 September 2016. Now that is a bull market that virtually everyone missed it, and I would suggest the current consolidation is healthy and new highs will be made in 2017/18.

But market analysts are just guessing when they try to explain why such a sharp fall, and why now.

Cash lenders who obtain gold as collateral disposing of it as they always do, with prejudice. Source: Alhambra

Interesting David Chaston points to an article written in October and not the one he wrote in Feb ... http://www.interest.co.nz/personal-finance/79965/2015-gold-markets-were-...

Worst timing ever that one

After a few thousand years, Gold has probably had its days as the ultimate precious item to own and trade with. Now in the electronic age an electronic tablet that can do things, and help you make a living, is much more productive and valuable than a lump of shiny metal (and there is far more gold extracted and in storage than is needed in electronic devices). Land, real estate, is now the new gold. Land is much more useful than a lump of metal. With increasing population and limited land the whole equation has changed. Land is the most sought after asset and rising faster than the value of those shiny lumps of metal that are essentially useless to most people.

I agree land is the #1 asset when you have a stable government. Gold's mobility is a key advantage in most of the world. Yesterday's $40 sell off is a blip likley at the hands of the IMF's trading desk - the case for Gold remains very strong. Geo-political affairs around the world are increasing rapidly for those that choose to give it somme time. Syria is something to worry about for the whole world - one hospital left for 4M people in a time of war.

The other major factor with gold is the derivative's and EFT's trading on the underlying outnumber physical ounces 110:1; meaning the physical market bears little resemblance to the price.

In regard to the electronic age of finance - the current FX markets are a hybrid of fixed & floating mechanisms, not the Milton Freidman example at all & subject to sharp volatility - in the words of Greenspan, a key archetict of the current system "Gold is a currency. It is still, by all evidence, a premier currency."

It's unique properties (only Au & Pt don't oxidise) means it is an ideal long-term play. There is less than 2 oz for every person on the planet - eventually every paper currency returns to its intrinsic worth, zero. Gold transcends all of us.

"The stars blink and fiat is no more"

Having said that I doubt gold will really take off until people loose their confidence in governments. All currency is really just government credits. When it becomes clear that the creditworthiness of governments is going down the toilet gold will take off. At the moment the masses still believe government will fix it and everything will end up okay.

The Masses still believe in a Trump government to fix everything?

I don't think they believe a Trump administration will fix everything, its just better than the criminal cartel alternative. If I were an American I would vote Trump over Clinton. Not because I think Trump will fix everything, its just because I believe the US stands a chance under Trump (although it maybe too late) but no change under Clinton. As Trump said we spend 6 Trillion on wars in the middle east with nothing to show for it and we cant find 2 trillion to fix our infrastructure and bring it into the 21st century? and he's right.