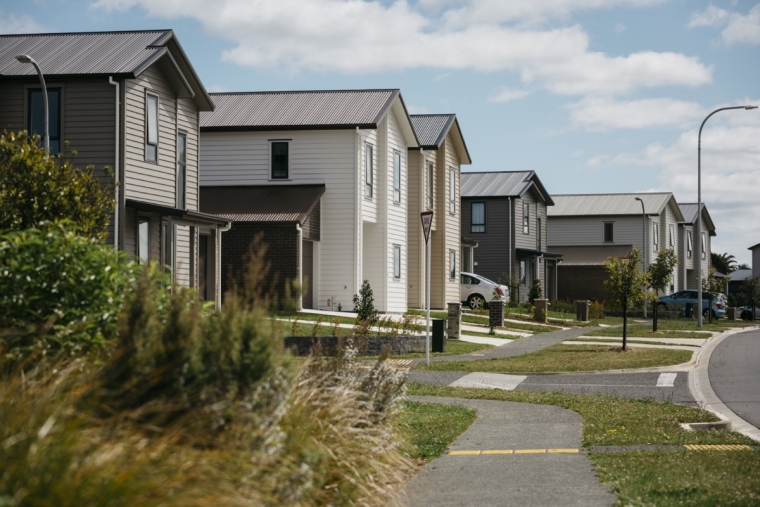 More than 13,000 new homes were added to Auckland's housing stock last year and the rate of new home building shows no sign of slowing down.

Code Compliance Certificates are issued when a property is completed and as the graph below shows, the number of new homes being completed in Auckland each year has more than doubled over the last four years.

That suggests the number of new homes being completed in Auckland could hit around 15,000 a year some time in 2022, which would be an increase of 14% compared to the number completed last year.

The figures also suggest that while the number of new homes being completed is still rising, the rate of growth is slowing, although a peak appears to be at least a year or two away.

The figures also suggest the time lag between a building consent being issued and a code compliance certificate being issued is starting to narrow, which may be a sign that the capacity pressures which have plagued the construction industry in Auckland over the last few years are finally starting to ease, although there is not yet any sign of construction costs starting to come down. 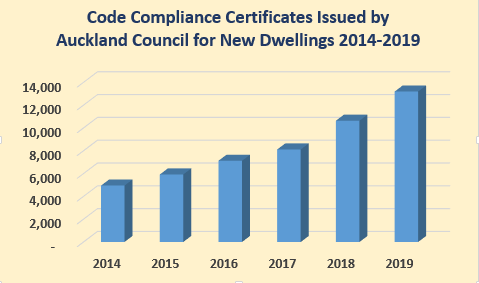 Gotta start somewhere. Banks pulling back from funding future developments will not help.

There certainly seems to be a lot of unfinished building projects around Auckland, some of which have resulted in them being mortgagees even in the expensive central city areas. Though I can understand the banks point of view of not wanting to continue to fund a development if they haven't got a hope for regaining those funds by successfully selling at an very over inflated price.

Its highly likely many of those builds have run amok due to insufficiently skilled staff or the staff have simply left to work elsewhere and the contractor has no way if continuing. Also, critical quality control issues such faulty concrete placing or mis tied or completely missing steel work in the foundation works will kill your project dead, most likely beyond revival. It does happen.

Where are these unfinished projects? I'm not aware of any.

Its good to see the sector back on its feet post gfc and after many decades of boom and bust hopefully entering a sustained period of prosperity. That will help the sector rebuild the long absent skillbase of competant and ethical operators instead of the underskilled opportunists the country has been plagued by for so many years now. As for construction costs coming down? Unlikely as so much of the newbuild work is brownfield and that is eyewateringly expensive and difficult to acheive efficiencies of scale on. The only way to get around that issue is opening up huge tranches of greenfield land then projects of significant size and scale can be undertaken. I'm thinking there will be significant amounts available as some rural land becomes unusable for livestock when freshwater regulations inevitably forces some farms to be idled...

Are these numbers gross or net of demolition/removals of older homes to make space for redevelopment?

Stop thinking so much, you know you aren't meant to look behind the numbers.

This just in from Bob Dey

Barfoot & Thompson sold the first 4 properties at its first central city auction on Wednesday, but the remaining 6 were passed in, and another withdrawn. Similar results as last year then.

Yes. And number SOLD did not increase in 2019.
And apartment sales fell.
So, I ask again, to deafening silence, what is happening to all this unsold stock being added???
Inevitably excess stock pulls down prices.
Also, those with unsold stock will start selling it off cheaper, hence price median falls.
Also, "homes" is a nice broad definition.
What would be really useful is to know price of what they consented, when it sold.
Lots of tiny townhouses, apartments and retirement units is not same as lots of 3 bed places with a garden.
Building cycle is not totally out of whack with the economic cycle, whatever Finance Minister says.
And of course, then is effect of the Virus to factor in.....

I haven't had time to compare stat's but someone may

The market is definitely warmer though. Aren't you a real estate agent on the Hibiscus Coast? If so you'd notice that all the town houses in Millwater which i was dubious about if they'd sell or not have now all sold.

The Virus effect could be positive for the housing market more people taking money out of the stock market and into housing. Then you factor in that if there was a pandemic which countries would you rather be in. New Zealand i'd imagine would be quite high up that list.

Yes, it's a shame that articles like this don't show the interaction of other data like consents, COC, etc.

As you point out, there is a lot of other stats. to take into account that can show many different outcome combinations that what raw figure of consents show.

Even if developers know that the market has changed going forward, by either market feedback or their funders' stricter lending criteria, for many of them they have no other option but to continue and hope the market will change in their favour, or at least to mitigate their expected losses.

I mean, what else can they do, in for a penny in for a pound. The cyclic nature of a boom and bust methodology is so out sync with the demand/supply cycle that it has severe speed wobbles and is bound to crash.

Two points of interest that need adding to the mix, but support your points are:

1) Takapuna developers shortfall in building this development, https://www.nzherald.co.nz/business/news/article.cfm?c_id=3&objectid=12…, a $15.9 million loss even though all units sold, and:

2) Cancellation of pre-sale contract which is then relisted at a higher price.https://www.stuff.co.nz/life-style/homed/first-homes/119147416/on-the-l… Maybe what was happening here is the developer would be in a negative equity position if sale concluded and is taking the punt that he can resell at a higher price, rather than knowing that he definitely will sell at a higher price.

Its the property sector, more chicanery than you can poke a theodolite at. That Wellington instance could be viewed as the developer simply financing themselves via the funds supplied from the buyer despite saying otherwise....

Would quite a few of them be sold long before completion?

So, house and land packages for instance. The sale would occur when someone signs up for a house to be built on a section. The completion of it would be a year or so later.

Many townhouse developments would operate this way too.

And the record on homelessness is reported as a terrible failure of policy.

The public housing waitlist is probably the best indication of how things stand. It reached a record of 14,496 last November, nearly triple the 5844 eligible families or individuals on the list when the Government was elected.

More than 12,000 of those queueing up for a state house are Priority A, which means they are people whose needs must be "addressed immediately".

do you mean a terrible failure of the policy settings that encourage housing to become monetised or something else, please be specific.

Better import some more low skilled people. Only bringing in circa 50,000 just now.

You are winding up PA he she will have a meltdown.

Millwater sales past 3 months are flat cf 2018-19 and that compares to 13% rise in Auckland. Plus listings are 33% lower than a year ago