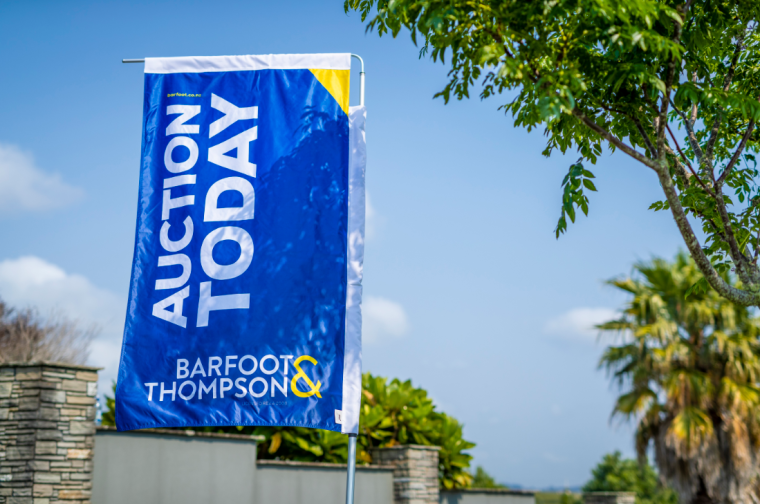 Ever increasing auction numbers appears to be the new normal in Barfoot & Thompson's auction rooms.

It means the number of homes that passed through Barfoot & Thompson's auction rooms last week was 49% higher than a month earlier.

The sales rate appears to have settled to a new normal, with sales achieved on 59% of the properties auctioned last week, compared to 60% the previous week and 59% the week before that.

Auckland's central suburbs contributed the most properties (82) to last week's auctions, followed by the North Shore with 73.

The highest sales rate of 75% was achieved by the Northland properties auctioned, although their numbers were low with just four properties on offer.

The sales rate was lowest for the the North Shore properties auctioned, with sales achieved on just under half (49%) of them (the table below gives the breakdowns by district).

Details of the individual properties offered and the results achieved are available on our Residential Auction Results page. 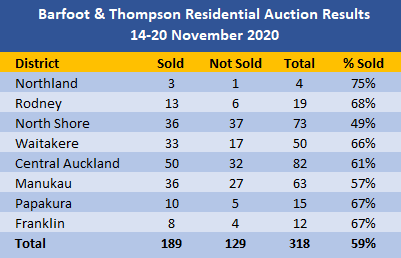 What it actually means is more property going to market via auction.

J.C.
Basic Real Estate 101 really: selling via auction is more expensive for the vendor but these costs are worth it when it is a sellers market (it is strong) with competing bidders and potential of high price with lots of FOMO OR a buyers’ market when the market is weak with lots of sellers but few buyers and desperation on the part of sellers.
It is not the later.
Your comment seemingly suggests denial of reality. :)

Nearly everything was already going via auction through barfoot in the auckland market over the last few months.

Actually it is pretty obvious now that things are stabilizing and getting back to the peak from a couple of months ago looks unlikely, specially now more banks are self-imposing LVR restrictions and unemployment is not going down.

b21
We look forward to REINZ report out mid December.

We do indeed. As trustworthy as it has always been, I am confident some will be happy to see hyperinflation once again.

Yeah right, I'm waiting for a politician to put the boot in and say "Higher house prices and inequity are a good thing, as it creates a rental market and at the end of the day, you do need someone to pay your mortgage".

50 percent of the population are renters, almost 50 percent voted for legalizing cannabis... I don't know but is there any connection between these statistics. Also does Helen Clark have any responsibility for causing either or both

Auctions really are a con. It's fascinating seeing the techniques auctioneers use to squeeze money out of bidders. How much regulation is used around this? Its a high pressure environment which doesn't seem to safe guard buyers.

Nifty
Really great for vendors in a strong market as currently with competing bidders - this why it’s called a sellers market.
Really great for buyers in a weak market with no competition amongst bidders and vendors sadly (for them) having to face up to prices well below their expectations. That’s why it is called a buyers market.
Your comment negates consideration of the later situation.

How's that relevant to my comments? Just because its a sellers market doesn't mean you should be able to use high pressure tactics to force someone to over commit in the heat of the moment. Its not just standing in a room bidding, the problem is the antics that happens around this.

Nifty,
In that case, welcome to the real world. If you personally don't like "high pressure" auctions don't bother attending.
Equally, a lot of pressure on sellers also - especially if the property doesn't meet reserve.
Reality is that most bidders go along with a set figure in mind so will bid up to that which is not really high pressure at all, and if they stick to that and miss out they would probably have done so anyway. No different to putting in an offer or a tender situation.

Note: As to pressure on buyers, I have previously posted that last year I sold my mother's house which was marketed on a tender with fixed period. The property sold for over 25% more than we expected and the same above the second highest tender which was at our expectation. That buyer would have saved a considerable amount (at our loss) if it had been an auction in which case they would need to have only bid $1 more and not 25% more than the second highest tender.

Yes. We recently bought and it amazed me how much the process is staked to in the vendor’s and agent’s favour. You really feel like a lamb to the slaughter as an amateur trying to buy a house to live in going up against seasoned pros out to make money. The system seems to be designed to maximise money spent.

If you're buying in Auckland it's next to impossible to avoid auctions, not practical advice. You're clearly not understanding the point.

Nifty
I clearly understand the point. This is the real world; auctions are something that have been around and accepted method for eons.
It is just seems that the current market conditions and auctions don’t suit you.
Remember for every auction it is the vendors choice to ensure they get the best price . . . and most purchasers will be happy knowing that they need only pay no more than “$1” more than the second highest bidder.
Maybe it is simply you lack confidence and therefore stressed. Good reason as to why one should always have a support person (unless very well experienced at auctions).
For a potential FHB - in which case a support person other than spouse is most strongly recommended.
Best of wishes if you are currently buying. I readily understand that it is a frustrating time for FHB in particular.

All the wrong assumptions sorry. I've been on both sides of the buy/sell and seen how ugly it is. Maybe you need to revisit an auction room and see how it actually plays out these days.

Interesting that NSC should be below the average for auction clearance.
It has around 20% more OTM compared to a year ago, whereas the Auckland average is virtually same as last year. Rodney has 16% fewer OTM than last year. My metric of new listings per day in Auckland is pretty steady: a week ago, in prev 6 days, the average was 185. Today it is 173 for last 6 days. Hibiscus Coast has about 9 listings per day, compared to only 5.4 last year at this time. Turnover up, prices up. Market has stabilised at a high level but not quite as manic as September.