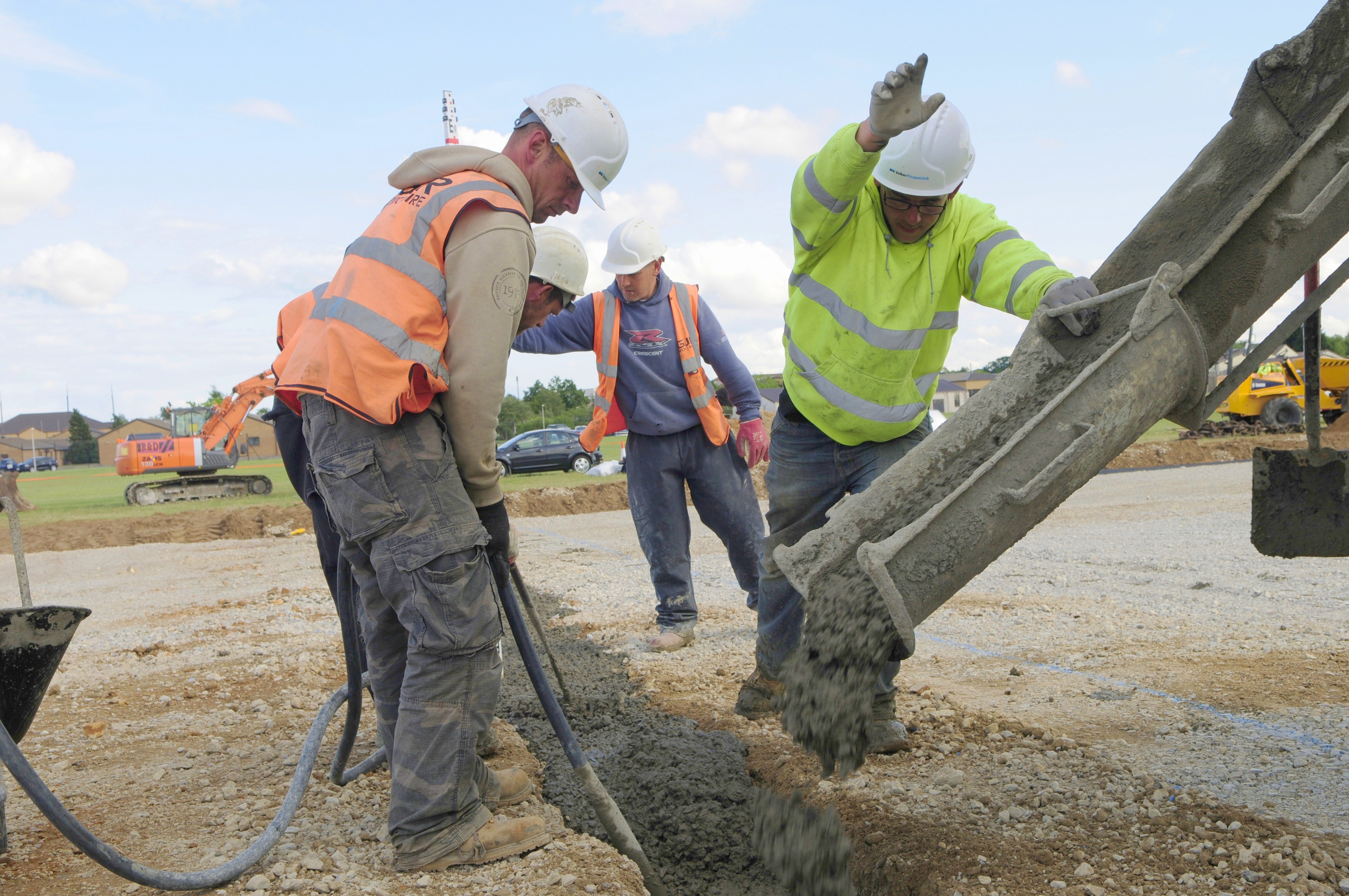 Damn the Covid torpedoes, it's full steam ahead for the construction industry.

In spite of the economic disruption caused by Covid and now international events such as Russia's invasion of Ukraine, New Zealand's construction industry has a record pipeline of work lined up which should keep it operating at maximum capacity for the next couple of years.

Despite Covid restrictions, capacity constraints and economic uncertainties, the value of all building work consented in 2020 remained almost unchanged compared to 2019 and then surged dramatically in 2021.

According to Statistics NZ, the total value of all building work consented last year was $29.38 billion, up $6 billion (25.7%) from where it was in 2019, before the world went mad.

Some of that increase will be the result of inflationary pressures, but not all.

For example in the booming residential construction sector, the value of new dwelling consents increased by 38.1% in the 12 months to end of February this year compared to the end of February 2020.

Over the same period the number of new dwellings consented increased 31.4% and now sits at a record high.

Last year that figure increased to $8.19 billion, up 9.8% compared to pre-Covid levels.

That's not bad considering that changing shopping patterns and a lack of tourists have caused a slump in consents being issued for retail premises and traveller accommodation, while changing work patterns have crimped the growth in consents for new office buildings.

However the relatively weak performance of commercial building activity has been more than made up for by dramatic rises in construction work in the health and education sectors.

Last year the total value of consents issued for buildings such hospitals and nursing homes hit a record high of $1.029 billion, up by 70% compared to the previous record of $606 million set in 2019.

Similarly, the total value of consents issued for education buildings hit a new record of $1.46 billion last year, up 37% compared 2019.

So while economic uncertainties abound and are likely to be with us for the foreseeable future, there are no signs that tradies will be hanging up their hard hats any time soon. 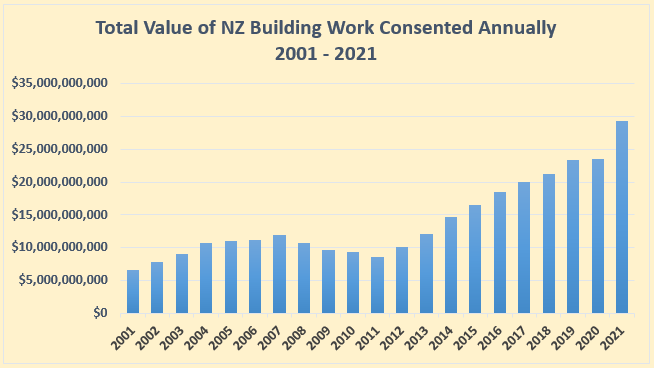 another article signalling trouble in The Herald. Note the comment that most developers are now lending from second tier finance companies, not banks….

What could possibly go wrong??!!

Interesting. Someone more familiar with the data might be able to answer the obvious question this poses: How much of the development in the pipeline is sensitive to changes in the cost of borrowing, or even to the price of land and buildings? By the look of it - not very much. In which case, the demand for construction will continue to outstrip the supply, and the key driver of domestic CPI inflation (building costs) will be unaffected by increased borrowing rates.

In good economic times, a high proportion of development consented is built. This does not hold when the shit hits the fan, as we saw from 2006-2009.

Intertesting - thank you. I guess how much shit hits the fan depends though on how much of the development pipeline is only viable with continued cheap credit and ever-increasing property values? Higher borrowing costs and a gloomier outlook might knock a few of the older peoples' homes out (given that the business case can hinge on capital gains) - but schools, hospitals, state housing etc?

The demand for construction is multi layered, residential is the most sensitive but has the shortest lead time. Personally I'm noticing strongest increase in demand from the commercial sector at the moment, but conversely they were most quiet 2020/21.

If the economy goes to the wall I'd take a stab at demand dropping 30-40%.

I’m calling residential building consent issuance being at least 30% down YOY by the end of this year.

I worked a lot in the development industry 2000-2010, and was in the middle of the credit crunch that occurred 2006-2007when the OCR soared higher and mezzanine finance collapsed. Look what happened to building consent numbers then…

history is going to repeat.

I agree HM. I agree with most of your posts. Except I'm probably  more pessimistic.  I think a whole truck load of shite is heading for the fan.

And really it has too. If we want to get back to the egalitarian  society that the majority of kiwis appreciate.

If  both parents, of a couple of kids, have to work full time jobs just to stay afloat, outside a few CBDs, then the system  is broken.

Families are the bedrock of society.

I also worked in the Auckland property development scene during 2006-2010 and dominion finance was our mezzanine financier. That got pretty interesting. Major difference is mortgage rates were hitting 10% before the collapse, we’re seeing the reverse now. I’d say it’s gonna get alot uglier this time for that reason, especially for the developers finishing up their projects within the next year. Banks are gonna get very snarky. The big 4 were  pulling the rug before completion back then and it’ll happen again. Unfortunately its the subbies that’ll bear the brunt.

Thanks mate. Good to hear informed views from other people who have been in and around development, especially between 2006-10. I learnt a lot of lessons from that experience. A whole lot of new people will learn a lot in the next year or so.

amazing how oblivious the vast majority seem to be to the coming carnage, including economists and writers on this website.

Interestingly I was walking around the neighbourhood the other day. Our whole area was rezoned a while back from "single residential" to "townhouse & apartment living". For the past 3 years traffic congestion around here have been caused by tradie vans, concrete trucks, etc. And yet I couldn't help noticing a couple of properties with one house on them and for sale billboards in front. One of the sale features listed was "consent granted for 8 townhouses (or whatever)". Quite simply, that is developers walking away from projects they had in the pipeline. I suspect (anticipated) rising finance costs (eg. interest rates), well documented supply chain issues for materials, and inflationary pressures from those materials (plus wages).... have brought about a perfect storm where some of these developers are finding themselves over-stretched.

Yep, I think it's very quickly become difficult to build.  We had a quote of ~$4700 per sq m for a house that one year ago was quoted as $3000 per sq m.  That should show you the real cost increases hitting builders who will suddenly find that nobody can afford to build, particularly as finance costs increase.  There will be an absolute hollowing out of the building industry over the next year or two if supply issues aren't fixed and costs don't come down, considering the finance costs.

Yep - as I have been saying for about a year!!!

Then you'll love this......... I have a very large master bedroom, so I thought it would be nice to add an ensuite bathroom. Nothing elaborate: 3.6m2, and off the shelf shower, single vanity, toilet hardware & fittings. The quote (from someone I've used before): $70,000!!!!! No thanks. I'll walk the extra 3 metres to the existing bathroom!

Similar situation in Ireland 2007, the momentum does not stop over night to be sure.