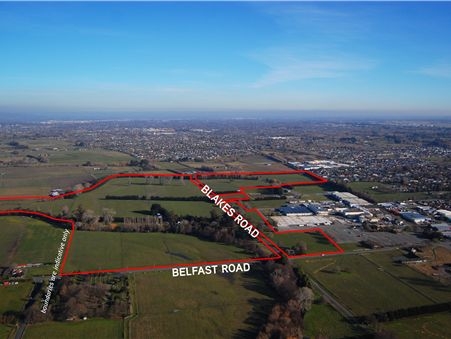 On the block: SCF's Belfast Park.

South Canterbury Finance (SCF) receiver McGrathNicol appears to have sold the first parcel of the failed finance company's Belfast Park land on the northern outskirts of Christchurch but the sale of the other two parcels, including one zoned for 640 new houses, is running behind schedule.

McGrathNicol, through Colliers International, has marketed Belfast Park in three pieces, based on council zoning, with a rural slice, an industrial slice and a residential parcel, with the latter likely to be in hot demand given the need for new housing in the Christchurch area following the series of earthquakes to hit the region since September 2010.

Colliers' website still features advertisements for both the 18.8 hectares of business zoned land and the 62.5 hectares of land featuring about 640 residential lots. But there's no advert for the rural parcel with interest.co.nz hearing this, about 11 hectare site, has been sold.

Via a spokeswoman, McGrathNicol managing partner and SCF receiver Kerryn Downey, would only say: "A competitive sales process, being managed by Colliers International, is currently underway for the rural, industrial and residential components of Belfast Park. Due to confidentiality between the parties, the receivers are unable to comment further at this stage of the campaign."

The sales do, however, appear to be taking longer than expected to complete.

Colliers' advert for the business, or industrial, slice notes qualified purchasers had until November 4 last year to do their due diligence and to present their offers. After that it says the vendor would deal with selected bidders with the aim of concluding a confirmed sale within three weeks. The advert for the residential parcel notes a November 18 due diligence deadline with a deal aimed to be confirmed within three weeks of that.

The first Belfast Park receiver's report noted a NZ$10.1 million debt to secured creditor ASB and a NZ$14.3 million advance from SCF. Tyrone Estate, a wholly owned subsidiary of Belfast Park, had NZ$7.9 million worth of advances from Belfast Park and SCF.

Downey told interest.co.nz last year there was interest from both property developers and the government in Belfast Park following the devastating February 22 Christchurch earthquake.

Asked last year whether he may come under pressure from government interest in the land given as SCF receiver he is acting on behalf of the taxpayer who is facing a multi-billion dollar bill following the earthquake, Downey said his job was to get the best price for the land no matter who it was from.

"My prime objective, and my responsibility under the Receiverships Act, is to get the highest value reasonably obtainable at the time," Downey said last year.

SCF collapsed into receivership on August 31, 2010 triggering a NZ$1.58 billion taxpayer funded payout to 35,000 of the company’s investors under the Crown retail deposit guarantee scheme. After selling SCF's 33.6% stake in Dairy Holdings for NZ$56.4 million earlier this month, McGrathNicol has now recovered NZ$451.4 million from the receivership on behalf of taxpayers. The government expecting to get about another NZ$228.6 million back, for a total return of about NZ$680 million, or 43% of the taxpayers' outlay, leaving a loss of about NZ$900 million.

The Press reported last month that four appeals against the rezoning of 64 hectares at Belfast Park from rural to residential and business had been dealt with by the Environment Court. The newspaper said Belfast Park Ltd and Tyrone Estates Ltd appealed against parts of the rezoning, along with Environment Canterbury (ECan). Meanwhile Lowe Corporation, owner of the adjacent Belfast tannery, appealed against the entire rezoning.

However, The Press said ECan, Belfast Park and Tyrone Estates settled their appeals by the time the Environment Court began to hear the case in late November. Other parties, including Lowe Corporation, struck a deal with the city council to include a 500-metre buffer zone in the city plan where a limited range of non-residential activities were allowed.

I understand the rural block sold to an optimistic local developer with the intention of getting it rezoned for commercial/industrial usage given it's Main North Road frontage.  I also understand that (heresay only mind you and I can't quite believe it but...) the price was very very good (ie absolutely fantastic) given the current zoning (possibly 8 figures?)  GV was only $6.4m, note transaction is not completed yet as Tyrone Estates are still listed on the title, note also that Tyrone Estates seem to have now fully disposed of all the smaller sections in the Larne St subdivision (they had several sections left (6 or so I think) when SCF went under, these sold at around $140-150k each gross).

In regards the remaining blocks, I don't feel that the value is really going to be that high at the moment, given that CERA have taken free will to rewrite the city boundaries with literally hundreds and hundreds (if not thousands) of hectares already or in the process of being rezoned.

planning maps 43 and 51 show some of the large tracts already rezoned, and there are Rural 2 zoned properties on this map still being rezoned or already approved and with roads already going in (such as some Rural 2 land on on map 52).

On a good day $400-700k per ha could have been acheived, but today I think under $400k/ha would be realistic (which is why I'm surprised the rural block sold anything like the level it appears to have acheived).