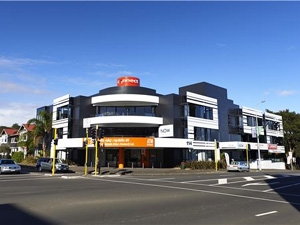 The building occupies a prominent site on the corner of Dominion and View Roads in Auckland.

Tauranga-based property syndicator Property Managers is selling down unsold investor interests in a syndicate that owns an Auckland office building, more than two years after the syndicate was first offered to the public.

Property Managers set up the syndicate as a proportionate ownership scheme to acquire the office building on the corner of Dominion and View Roads in Mt Eden, which had Bank of Baroda, Connect NZ and Finance Now as its main tenants.

The scheme offered investors 551 proportionate ownership interests in the property at $25,000 each and the property was acquired for $13.158 million in February 2012.

But it appears that not all of the units were sold down to outside investors.

A substantial number, it is not known exactly how many, continued to be held by PMLU (Dominion Rd) Ltd, which underwrote the syndication offer.

Those interests are now being marketed for sale to investors by Colliers International.

PMLU is a private company owned by interests associated with Denis McMahon, Property Managers' executive director and majority shareholder (through a trust arrangement).

The most recent set of scheme's accounts posted on the Companies Office website are for the year to March 2013.

One of the intriguing aspects of those accounts is that they showed that the syndicate itself had no debt, even though BNZ holds a mortgage over the Dominion Rd property.

That apparent contradiction was explained in the related party dealings section of the accounts, which showed that the BNZ mortgage was a PMLU debt, with the building owned by the syndicate given as security.

The accounts showed that as at March 31 last year, PMLU owed BNZ $7.35 million on the mortgage.

The size of the mortgage suggested that a large proportion of the units in the syndicate acquired by PMLU as part of its underwrite function were debt funded, using the building which all the investors own, as security.

That's an unusual arrangement, because the benefit of the BNZ loan would apply to PMLU itself, presumably to fund its acquisition of interests in the syndicate as part of the underwrite arrangement, while the risk associated with the mortgage over the building, would be shared equally by all investors in the scheme, because the mortgage ranked ahead of investors' interests in terms of security.

The $7.35 million mortgage would be enough to have funded PMLU's acquisition of 294 investor interests in the syndicate, which would be 53% of the total interests originally offered, which would mean less than half were sold down to the public when the scheme originally went to market.

So there may still be plenty left for Colliers to sell down now.

The scheme is forecasting cash returns of 8% a year, which is still more than you can get from leaving your money in the bank, so that should appeal to some investors.

However there are a couple of things investors should pay particular attention to when the latest set of accounts become available.

The 2013 accounts disclosed that there had been a problem with one of the tenants in the building, which had affected the scheme's cash flow.

The property had six tenants and the accounts disclosed that one of these owed $111,320 at the end of March last year and had been issued with a Property Law Act notice.

However the accounts also stated that the amount may have been able to be recovered from the building's vendor under the terms of an arrangement entered into at the time the property was sold.

It will be be interesting to see how those numbers may have changed when the accounts for the year to March 2014 are released.

Denis McMahon did not return calls or reply to written questions put to him by interest.co.nz during the preparation of this article.

I dislike these investments intensely . Property syndication shares are like genital herpes........once  you have got them its impossible to get rid of them .

While I have not  got herpes , I do have shares in a two retail property syndicates , and what a nightmare they have been .

In the first case , we needed to cash- in after three years , but because there is NO SECONDARY MARKET in the shares , we still own them 7 years later.

In the second case , the managers ( and promoters) have raped the scheme in astronomical fees , commissions and a whole  host of other charges .

We have been unable to fire the property managers as they have a 10 year management contract , which was in place in the prospectus .

The building maintenance contract is with a related party ,( related to the managers)  and this is also problematic because  they dont do the repair work , they subcontract it out , and clip the ticket , so we end up with huge bills for routine maintenance .

We have also serviced a shortfall in income for 5 years , because the scheme had debt to start with  .

Both schemes have always underperformed and not met their income and yiled expectations .

If you want exposure to commerical property as an investment class  , buy only NZX LISTED shares such as Auckland Airport , Goodmans etc .

Property syndications are in my experience  worse than Finance  Company investmens .

At least tihe Finance Companies you knew how much you had lost , with Property syndications the losses and bleeding are slow relentless and draining , and almost never ending .

Yes quoted companies like Argosy, Goodman seem to be underrated. OK they are already geared internally but the yield of 6%+ tax already paid is eye watering compared to owning a residential rental. Apart from the no-care or maintenance cost and no tenant worries, you can sell them in a few minutes from your computer.

Like other property there are good and poor times to buy and market sentiment can change.

However the sales commission is not 4% but only 0.3% and the cash arrives 3 days later.

Boatman, your post should be required reading for everyone who is about to sign on to one of these property syndication arrangements.

Thanks boatman and if you see my second comment under the Augusta article I asked the same question. Am amazed no one from Augusta or from syndicates has answered. seems crazy that you get a huge write up then do not join the conversation. Syndicates get to clip the ticket at 3  percent on the buy and sell i guess and then stick it you with reduced dividend payouts. Or until someone says otherwise that's my view.