This house at Gulf Harbour sold at mortgagee auction for $375,000.

A modern four bedroom home on two levels next to the golf course at Gulf Harbour north of Auckland has sold at auction for $375,000.

The REINZ's median selling price for properties sold in the Auckland region in July was $610,000.

It was sold at a mortgagee auction (it was mortgaged to Westpac) by Bayleys Real Estate last week and the company's advertising material described it as an ideal family home or rental property, with good sized kitchen and dining areas, a separate lounge and spacious back yard.

As well as having four bedrooms, the house had two bathrooms and a double garage and was located on a 346 square metre site immediately adjacent to the Gulf Harbour Golf Course, with the upstairs deck and rear windows of the house overlooking one of the greens.

But the agent who handled the sale, Billy Beggs of Bayleys Whangaparaoa, was reluctant to discuss the reason for the apparent low price when contacted by interest.co.nz, other than to say that as far as he was aware, the property did not have weathertightness issues.

But its does have an interesting history.

It appears to have been developed by the Merlot Investment Group, a property spruiking outfit that was active at Gulf Harbour in the early to mid-2000s, but which is now in receivership and liquidation.

It was bought by its current investor/owner in 2007 through an investment company set up for the purpose but this went into voluntary liquidation at the beginning of this year.

The liquidator's report said it was insolvent.

The mortgagee had subsequently taken possession of the property and put it up for auction.

Apart from Westpac, the other creditors were ACC and IRD. 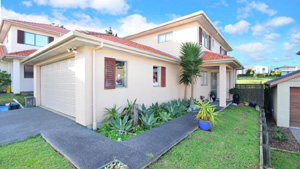 A view of the house from the street.

.... yep , you can tell by those weird oniony things in the garden ... definitely the house was constructed by Welsh builders ... ...

In a falling market the rubber is finally hitting the road.

During the recent eurphoria all sorts of magical terms were invented by the real estate agents to hide the fact that a home was plaster. I even suggested a rule for Asian investors saying that they could only buy plaster homes. They said I was racist.

A rising tide and all that - perhaps we are starting to see the flip side - when the tide goes out you can see who has been swimming naked. I call it Bolger's legacy - his reward for watering (pun intended) down the building code is an ambassadors job in the states.

The Building Act - which established the Building Industry Authority and the Building Code - got bi-partisan support. It was introduced by Margaret Austin in the dying days of the 87-90 Labour government. It was continued by (smirk, smirk) Graeme Lee in the succeeding National government with the formal support of Labour offered by Peter Tapsell. In the Third Reading young Nick Smith aired his views as did John "Hone" Carter.

They are all to blame on this one.

When everyone finally realised how much the BIA had stuffed up there wasn't even time to place it into the palliative care of the Department of Prime Minister & Cabinet before it got disbanded. Obviously someone has learnt the lessons of the past.

This illustrates perfectly why houses are a terrible investment , and the auction price is probably the realistic value.

Given its been occupied by tenants since the day it was built its probably in shocking condition and needs work , repalcing kitchens , carpets , etc, etc

Its a camel hike from Auckland , and prices there are always lower than say Hobsonville or similar small section clusters .

Merlot were a real shonky bunch of developers , so I would not be surprised if it leaked .

Why was it a bad investment ?

Because it was always potentially hugely cash-negative , and  unless you have big income, and/ or a  100% secure job  or deep pockets , it will often turn around and bite you.

Simply the  investor overpaid for it it in 2007 , hocked to the hilt , the mortgage repayments would have been over $1000 a week , and the rent could not have been more than somewhere between $500 and $600 .

I dont know about you , but I would not touch and investment that would cost me an ongoing $25,000 a year in after tax cash flow , plus Auckland  rates , plus insurance , plus management  fees , plus maintanance , plus a vacancy factor .

Its potentially a disaster for the small investor