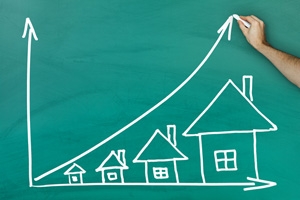 Average residential property values increased by 1.1% across the country in the three months to September and 6.4% in the year to September, according to the QV Residential Price Movement Index.

However although values were continuing to rise, the rate was growth was slowing, QV's national spokesperson Andrea Rush said.

Around the major urban areas, average values increased in Auckland, Christchurch and Dunedin over the last three months, were flat in Tauranga and declined in Wellington and Hamilton.

Average dwelling values in Auckland increased by 1.8% in the three months to September and 10.3% for the year with values rising in all parts of the city.

The biggest rise in values in Auckland occurred in Manukau where property values were up 2.1% in the last three months.

In Hamilton property values declined by 0.9% over the last three months but were still 2.7% up on the previous year.

Housing values in Tauranga were unchanged over the last three months but up 4.5% on a year earlier.

Wellington values declined by 0.9% over the last three months and were up a marginal 0.3% for the year.

In Christchurch values increased by 0.3% over the last three months and were up 5.1% for the year.

See below for QV's average property values for most major urban areas and the change over the last 12 months:

The chart above says it all really - the market peaked sometime in late 2013.

Looks like the $1m+ sales in Auckland are the only thing keeping prices at a National level from falling. Wellington down, Hamilton down, Chch and Tauranga flat, etc...

"Spot on" Mr Zombie Ponzi .....IMHO (talking about the AKL market) it has run out of local buyers and the buyers that are left,  either have plenty of equity in other properties, just sold a property (or are about to sell),  overseas domociled buyers - or people just with a ton of money !

So we are really in "ponzi" territory now, with these limited buyers, as above. The only way to keep this AKL "ponzi racket" going,  is to open the gates even further to immigration and foriegn buyers and it won't matter whether they live here or not ....

And the funny part is all the smug "Big Daddy et al" types do not realise,  is once these "overseas buyers" see they are just competing with themselves  - they will leave the market as they have to have the "upper hand" otherwise the deal is no good to them....

So you guys better wish for a ton more of these buyers..... as in this market, if the value of a property is not increasing........ well you do the math.

This report is nonsense.

Only the main centres shoud be taken notre of, e.g. Auckland, Wellingoitn Christchuch and Dunedin

This 1.1% figure includes all the depressed areas inhabited by the lower orders and the deserving poor.

Can you clarify your comment "deserving poor" please Big Olly? On the flipside please describe in your mighty wisdom who are the deserving rich at the same time?

He means Zombie Towns outside of a 2 or 3 hour commute of Auckland:  eg. Palmerston North, Wanganui, Gisborne, Taupo, Hastings, Timaru,  etc.  all doomed in the mega city economic development plan, propped up by immigration and globalisation.

They are going the way of Wairoa, Waipawa, Paoroa, etc etc in the 80s.

You mean we should fudge the figures by only counting growth in places that are growing and ignore those that are not?

and everyone was wealthy... well, everyone who mattered.

This article makes continuous reference to "values" rising.  Are these values "average values" or "median values"?  There's a big difference.

I'm assuming they probably refer to average values. If that's the case then these numbers may be boardering on meaningless.

I'm waiting for the REINZ median values to be announced.

REINZ data is normal out middle of the month.

However sometimes when a readers creates a post questioning specific details, the original article is amended.  Hence, the post no longer makes sense.  I can't actually remember if this was the case this time or if i was just a lazy reader.... but i know i have made comments other times, then the article gets amended, and my comment seems illogical.

...and yep REINZ numbers are usually out between the 10-14th of each month. I'm intrigued to see them.  If the medians don't improve for Auckland by November this year, then i think we may see almost zero median price increase (e.g. maybe only 2.5%) for a 12 month period.

If the medians don't improve for Auckland by November this year, then i think we may see almost zero median price increase (e.g. maybe only 2.5%) for a 12 month period.

But don't worry there will be plenty of lipstick to put on the pig - what will be next - reporting of 24 month price change....more articles showing a 33 year old couple who just made $250k profit selling their home! And don't forget the howling cries for lower interest rates.

I hear ya Zombie.

According to REINZ in November last year the Auckland median was 620K.

Yet the media constantly tell us that Auckland's housing market is skyrocketing. Unbelievable really.

Why do they go to the effort of calculating a QV index then end up reporting (in the table) the average price?

Actually, looking at the graph with yoy % change in index, which for NZ matches the 'average dwelling change yoy' in the table makes me think the 'average dwelling value' is infact the QV index adjusted value; they prob try to dumb it down as they assume the public get too easily confused; which only makes things more confusing for those who actually did stats at high school..