Investors compete for do ups at mortgagee auction

Property
Investors compete for do ups at mortgagee auction 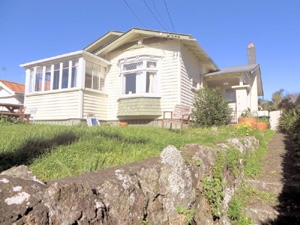 Mortgagee sales tend be few and far between these days so there was competitive bidding from a small but determined group of investors when two houses were put up for mortgagee auction at Barfoot & Thompson's CBD auction room this week.

Both properties were being sold by BNZ and both were do ups, providing investors with the opportunity to make improvements that could potentially lift their rental income and increase their value.

The first to be auctioned was at 5 Ranier St Ellerslie. This was a 1920s-era bungalow with an extension at the back that was added in the 1990s to give the house six bedrooms all up.

"It appears to need a little bit of work," the auctioneer said, adding the warning that that the agents handling the sale had been told that a Code Compliance Certificate may not have been issued for the extension to the back of the house.

The second property was squarely located in investor alley at 82a Palmers Rd, Clendon Park.

This was a typical three bedroom, Hardiplank weatherboard and tile house on an 813 square metre section.

"Some elbow grease and further capital will be required," the auctioneer said before accepting the opening bid of $150,000.

Not all investors are equal

The property auction system distorts prices!!!!   Where are all the economists?

Then there is this sort of behaviour apparently going on in Canada.....Does this happen in NZ?

Which makes a huge difference...

And how long has it taken for the people who are meant to be on the ball take up the issue of Do uppers investers, condisering that we hanve mentioned the significance of this influnce for several years now.....

And is this all that is refient for an artucule....go back ovewr my occassional post, do your own homework and maybe then u wil find some far more relievent and interesing facts....like how many purchases , % of sales are invester do ups....and when sold on in the follwing few months what influence this has on sales ave/ medians ... and the influnence on rents.

Till then a waste of an articule that would have been of practical interest.