The number of rented dwellings increased by 17,592 in the year to September with 7,821 of them in Auckland

Property
The number of rented dwellings increased by 17,592 in the year to September with 7,821 of them in Auckland 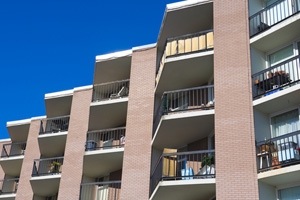 There was a sharp jump in the number of households living in rented accommodation in the 12 months to September, according to Ministry of Business Innovation and Employment (MBIE) figures

MBIE collects the bonds that are lodged with new tenancy agreements and holds them until they are refunded when the tenancy is terminated.

Just over 44%  of the increase in tenancies occurred in the Auckland region where the number of bonds held by MBIE at the end of September was 143,397, up 6081 compared with September last year.

Nationally the figures represent a return to the normal tenancy growth patterns after two years of low growth.

But growth fell back the following year.

At the end of September 2012 the number of bonds held had increased by 7,041 compared with a year earlier  and in September 2013 the increase fell away even further to just 1,917.

In Auckland, which is the country's largest rental market by far, the number of bonds held in September 2013 was up by just 741 compared with a year earlier.

The big increase in bond numbers in Auckland over the last year is likely to be a result of the region's high population growth, particularly from immigration, which has stimulated demand for rental properties and reduced vacancy levels, and increased activity from investors as they buy or develop additional properties to satisfy that demand.

However the bond figures do not capture all residential properties that are rented.

According to census data, there are many more households living in properties they are renting than the bond figures suggest, although the gap between the two is narrowing.

The 1996 census recorded 290,124 households that were paying rent to live in dwellings they didn't own but the MBIE was only holding 157,953 active bonds in the same month that the census was carried out.

That meant the rental figures identified in the census were 84% higher than the bond figures.

The difference could be made up of vacant properties, which would not appear in the bond figures, or situations where someone had purchased a property as an investment and rented it to a family member for a nominal or below market rent and without formalising the arrangement by filling out a tenancy agreement and collecting a bond.

There will also be some cases where landlords operate outside of the law and fail to forward bonds to MBIE.

However the difference between the number of bonds held by MBIE and the number of households identified in the census as renting has been steadily declining.

In Auckland the adjusted number of rented properties would have increased by 7,821 over the same period.

According to the Real Estate Institute of NZ, 72,877 homes were sold in the year to September, with 28,370 of those in Auckland.

If investors were buying properties at the same rate that the adjusted numbers of rental properties have been increasing by, it would mean that investors accounted for 24.1% of all sales handled by REINZ members in the year to September, and 27.5% of sales in Auckland.

The actual number of sales to investors is probably slightly less than that because some investors are also developers who increase the number of properties they own by subdividing existing ones or converting commercial buildings to residential use or by building new units from scratch.

When the developer/investor keeps those new units to rent them out, they won't show up in the REINZ figures but they will show up in the bond figures when the properties are tenanted.

But overall, the figures suggest that around a quarter of property sales in Auckland over the last 12 months could have been to investors while nationally it may have been somewhere between 20% and 24%.

Hard to tell what is going on, just from the numbers.

During 2008-2012 we lived in rented accommodation and also rented out the house we owned: didn't want to live there any more and it wasn't a good time to sell. When the market started to warm up, we sold the rental (our former residence) quickly and then bought a house to live in. That was 2012 - 2013. We know several other people in similar situations.

Sampes of one and anecdotes don't explain anything, of couse. As always, there is likely to be more behind the statistics than is revealed by the numerical aggregates.

Probably the result of the off shore Chinese investors on a massive spending spree over the last 12 months.

Stop importing people, if constanty increasing the population is the answer then someone asked a pretty stupid question. Ban foreign ownership of houses and foreign landlording, turn the economic knobs to make being a landlord a pretty unattractive thing to do, then make sure sections do not have onerous covenants on them so people can build smaller houses.

There I fixed it

I admire your persistance

Time for a re-think - a different approach

An individual email to each National Party MP asking what their position is????

Then publish the results or responses

It's more serious than what many think
see this

And that's only the big fish

Only one of 39 was clean - it's happening here

It's all connected - why do MP's turn a blind eye ?

I see that it is not just Australia doing this but they are doing it in a co-operative way with the Chinese govt, so I suspect a small amount of standover tactics and I imagine it will come here as well.

It does not take a rocket scientist to work out that people living in a country where land purchase is impossible with money burning a hole in their pockets (corruptly obtained or otherwise) will turn to countries where there is little or no restriction on their ability to do so, and one of the easiest countries to do this in is, hellooo, good old us. You'd have to be deaf, dumb, blind and stupid to think it is not happening in significant amounts.

Why do they turn a blind eye?

It is much more certain when you have only one eye in the first place!

Also notice in the SMH article that they are going back into the affairs of longer term arrivals who are already citizens.

Type the SMH headline into Google and it is big news there.

Jonkey would ignore any Chinese requests at his peril.

Sending all the offenders back (if there are enough of them) would solve the overvalued NZ$ as well both by stopping the cash flow and also relieve Auckland housing problems, maybe. Lots of rentals hitting the market at bargain prices?

There will come a point where the number of people seeking rental accommodation wiill exceed availability.

Rents will then adjust upwards to reflect current vaiues and increasing costs.

Stand back-that time is closer than you think.

Just like they've caught up with costs over the last 15 years?

Rents are held down by the ever increasing supply of rental properties, as baby-boomer investors continue to out-bid first home buyers.

You have to ask yourself; What's in it for them?

The ability to expand, pay for debt, promises and ultimately re-election.

At what cost though...

But then, we are socialist, economically illiterate, politically disinterested and barely educated.