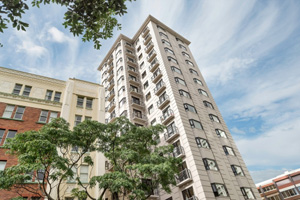 Recladding a formerly leaky Auckland apartment building saw one of its units almost triple in value in three years.

The apartment was a 41 square metre, one bedroom unit in the Argent Hall complex on Eden Crescent in Auckland's CBD, which was auctioned by Ray White City Apartments on Thursday.

Although it was small, it came with a balcony, a car park and views across the harbour to Devonport and Rangitoto.

However Argent Hall had been affected by weathertightness issues and has recently been reclad and a new code of compliance certificate was issued for the building in July.

That has had a dramatic impact on the prices being achieved for apartments in the building.

According to QV.co.nz the apartment put to auction had been purchased for $130,000 in 2011, before the building was reclad.

At yesterday's auction there were several bidders for the property and it sold under the hammer for $380,000.

Another apartment in the same building sold at the same auction for $312,000, although a sales history for that unit was not available.

The full results from the auction are below:

1D/1905 Anzac Ave. A 61sq m, one bedroom apartment that was owner-occupied. Came with a storage locker. There were multiple bidders but it was passed in for sale by negotiation with a highest bid of $280,000. The agent was Aileen Wu.

10a Hobson St. An 85sq m office space with four car parks. Vacant. Passed in for sale by negotiation. The agent was Rae Zhang.

2c/113 Vincent St. A 34sq m, partially furnished two bedroom unit, rented at $340 a week. Passed in for sale by negotiation. The agent was Victor Liu.

1221/135 Hobson St. A 34sq m, one bedroom apartment with a car park. Vacant. Passed in or sale by negotiation.The agent was Victor Liu.

Please leave this type of drivel out of the comment stream. You should comment when you have something worthwhile to say rather than because you have nothing better to do.

and you own interest.co.nz now?

No. But I moderate the comment streams on the property stories. And I'll be aiming to raise the bar.

You'll never heard about all the apartments that lost value in the last 3 years. Not on interest.co.nz anyway. It is not in their sponsors interest.

You obviously missed this one then:  http://www.interest.co.nz/property/72968/even-cheap-leasehold-unit-can-b...

I do believe that Greg Ninness's weekly apartment sales reports have been doing exactly that. He has provided previous sales history on most of them. Nearly 60% of those reported (that I have read) have been losses, many of them substantial

Notice that there is no previous sales history this week, now giving free plugs for the agents instead

Alright I stand corrected, and apologise. But there is something about these stories that rub me the wrong way.

Given the current state of the market there are likely to be more of these types of stories coming. Remember that reading them is not mandatory. You have the world wide web at you fingertips to help you find something that is more to your liking.

The dogs and hens have more space than that on the farm.

Yeah, very light on fact here, no cost of repairs, straight sale speak reprinted. Can't see lifestyle value for money in 41sqm assessed at $480-$500 which is 25%+ higher than realised in some of the others mentioned in the article. Dodgy info all round.

You need to factor in that it was sold furnished, had harbour views and most importantly, came with a car park, all of which were mentioned in the article and would result in a higher rent. The facts are there. What is light is you analysis of them.

Please stop quoting rating valuations in these articles. They are meaningless for anything other than calculating rates and even the Valuer-General's office warns that they are not market valuations.

Greg, please ignore the moaning comments above. Too many people on interest.co.nz don't like to see anybody make a profit.
The information you write about is interesting and relevant. I would like to see previous sales history where it is available.

I agree, tbe cost of remediation work is an issue, but it will vary widely depending not just on the type and extent of work undertaken but also on how much kmoney (if any) the owners are able to claw back from the parties that caused the mess in the first place. However the main point of the story was to highlight that properties that have suffered devastating losses in value due to weathertightness issues can bounce back to full market value very quickly once the remedial work is completed.

You can go for broke on the crummy arpartment market