Auckland's Heritage Hotel set for major repairs after years of water leakage into exterior walls, apartment owners to be hit in pocket

Property
Auckland's Heritage Hotel set for major repairs after years of water leakage into exterior walls, apartment owners to be hit in pocket 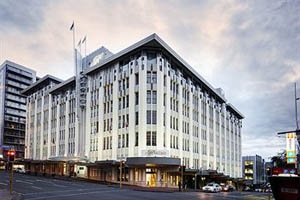 The landmark Heritage Hotel on the corner of Wyndham and Hobson streets is the latest Auckland building to require major recladding work due to problems caused by water seeping into its exterior walls.

The studio rooms and apartments in the complex are on individual strata titles and are mostly owned by investors, who will now face a substantial bill for the cost of undertaking the work required to fix the problem.

Some of the units in the building are leased to the hotel for use by its guests, other are rented out to tenants directly by their investors owners and some units have their owners living in them.

Problems first became apparent last year when plaster and pieces of masonry started falling away from the exterior facade at the front of the building.

At first it was thought this was merely a cosmetic problem, but closer investigations revealed it was far more serious.

Just before Christmas, unit owners in the complex were advised by its Body Corporate that it appeared that a plastered, double brick facade had been erected over the building's original exterior walls, along all of its Hobson and Wyndham street frontages and part way along the Gorst Lane frontage, in about 1934.

The new brick and plaster facade was built with a cavity between it and the original wall, and the new exterior was fixed to the original building with metal fasteners.

It appeared that water had been running down the back of this new (1934) facade into the cavity behind it and that had rusted the ties that held the brickwork to the original building, allowing the bricks to move.

That had caused the plaster finish to start peeling off the outer walls last year.

It also noted that earthquake strengthening work was performed on the building in the 1960s, by fixing a number of 4  x 1 treated timber beams which were bolted on to the bricks.

"Whilst this would not comply with today's earthquake standards, the timber, which is treated, appears to be in sound condition," the report said.

"At this stage it is too early to discern any meaningful scope of works, however clearly the outer facade will in likelihood need to be removed, window areas remediated, and possibly earthquake strengthened," it said.

The current brick and plaster facade may be replaced with pre-formed concrete panels which could incorporate the building's existing art deco features.

"The scale of the work is quite significant in that it involves approximately two and a half sides of the building," the report to unit owners said.

"At this stage the consultants are unable to put any ball park cost on the repairs, however these will be significant."

The current Heritage Hotel building was built in 1921 and was well known to generations of Aucklanders as the Farmers department store.

Farmers closed the shop in 1991 and it was remodelled and reopened as the Heritage Auckland Hotel in 1998.

Why not re-tie the facade, repair the leaks, refurbish the windows where corroded and have it cost a fraction of that?... Oh that's right the consultants won't be able to charge as much for that...