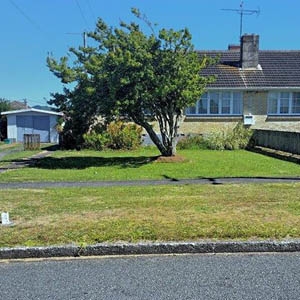 There were plenty of potential buyers at at City Sales' auction room this week for their regular apartment auction, including a contingent from Huntly who had come up for the sale of one half of a duplex which was one of the star's of the show, however the Dunedin-based owners of a downtown leasehold unit that sold for well below half of its original purchase price were left with an expensive haircut.

The 1940s-era, two bedroom Huntly unit was typical for its type, with brick and tile construction, solid timber joinery, a separate garage and sitting on an almost 600 square metre section.

They don't build them like that any more and with a floor area of 80 square metres it was more than twice as big as many of the modern two bedroom apartments in Auckland's CBD.

There were several potential buyers for the property at the auction and when bidding reached $97,000 but would go no higher it was passed in for sale by negotiation, suggesting Auckland is not the only place where property values are rising rapidly.

The full results of the auction are below:

31 Semple St, Huntly. An 80 square metre, two bedroom brick and tile unit, circa 1945, with detached garage on a 593 square metre section. There were several bidders for the property but it was passed in for sale by negotiation after the top bid of $97,000. According to QV.co.nz it was last sold for $82,000 in 2012. The agent was Shirley Wong.