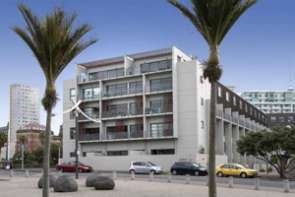 Someone made good money on an apartment in the Hudson Brown building.

Leasehold properties have been out of favour with investors over the last few years although for people with the nerve to take them on, there can be good money to be made.

One of the apartments auctioned last week by City Sales was a leasehold unit in the Hudson Brown building near the historic former Central Railway Station building at the bottom of Auckland's CBD.

Like many leasehold apartments in the city, this one appeared to have originally been sold at a greatly inflated price that took no account of the effect that market ground rent payments would have on the property's value when they eventually kicked in.

It was rented at $580 a week which would provide an investor with a gross rental yield of 12.8%, which would reduce to 9.2% after deducting rates and the body corporate levy, which included ground rent payments.

That's around double the return that investors buying some suburban freehold properties are achieving, although the new owners would have to factor in likely future increases in ground rent and how they would compare with increases in rental income from the unit's tenant.

However someone else had made even more money from the unit because there was another owner in between the original purchaser and last week's buyer.

According to QV.co.nz, this in-between owner picked the unit up for just $186,000 in 2009, which means they would have realised a $49,000 capital gain (before selling costs) when it was sold last week for $235,000 and if they had rented it out as an investment they would also have received a very generous rental yield off it for six years they owned it.

So although the original owner took a bath on the unit, subsequent buyers appear to have done well out of it.

The gross rental yields on other apartments sold at last week's auctions ranged from 6.7% to 8,7%, while a large Placemakers outlet in Taupo sold at a net yield of 5.7%.

The full results of last week's apartment auctions by City Sales and Ray White City Apartments and the commercial properties auctioned by Colliers, are listed below.

Auctioned by City Sales on April 1:

In 10 years whats the land rent going to be? Land rent based on land valuation, land values in auckland have been going up at a fair rate of knots over last few decades.  Thats why people are fearful.

You miss out on one of the best things about property invesment, land ownership.  They arent making any more of it and the stuff that does come online (via council rezoning) is both more distant and at too slow a rate to respond to increased demand like we have seen last few years.

Watched a thing on property in China on cnbc on the weekend.  Some food for thought.

China has recently had a crack down on corruption by property develoopers where the developers would get the land from the govt. somehow (details werent described, but they dont buy the land in an open market like in NZ).

The developers in china used to think 'so long as we can get the land, we will make money', and they went nuts building dozens of sky scraper apartments next to each other even though no one in the city/district could afford them.

Corruption, and how these developers get this land seems to be a big thing over last couple of years, with billion dollar developers vanishing overnight as a result of investigations.

Relevance to NZ? I'm not sure.  But if they have been stopped getting access to chinese land to develop but have made billions from their developments over last 5 years, it wouldnt take a lot of imagination to see that they are bringing at least some of that money and 'get the land, will make money' ethos over to NZ

Having dealt with _generic_ Chinese producers in a couple of different industries and having some "on the side discussions" it's probably alon gthe lines of:

(1) The land is provided under a development grant - exactly the same kind of deal Premier Key gave to Sky Casino to make the Conference Center.

(2) the consortium that got the land, also owns the development interests _especially_ the project management and infrastructure roles.   Pretty similar in fact, to how Premier Key handed the keys to Sky Casino.

(3) The project management fees are the milk, and the market up in volume of counstruction is the milk.   The fees paid to the quality inspectors (again supplied by friends of the consortium, often for respectful acknowledgement of business - remember in such countries you do business with friends not with outsiders) is the cookies.    Surprisingly enough this is the same kind of keeping your plate in order that the top levels of Sky Casino and Key government do.
Just as they do in the other industries in China, they don't make the margin at point of sale, they make the margin in their factory, or in the supply of raw materials to the factory - that way the retailer really is doing the best price for their customers... it's every other step in the project management that makes the profit.

(4) The government foots the bill for the signed off project, after budget extensions and proofs that retail cortsortium isn't being inappropriately profitable or cutting corners.   That's one reason there was a recent crackdown on "backroom" factory inflations where many Western countries got pinged for pushing up their backend pricing.

(5) The profits are quickly laundered into something safe, preferrably infrastrucutre or off shore assets that the government inspectors won't see as dishonorable and thus seize.  Just like the "eyesore" hype that Premier Key and Casinos wanted to make about the Convention Center.

Like Leasedhold apartments, you can make money by gambling at Sky casino..