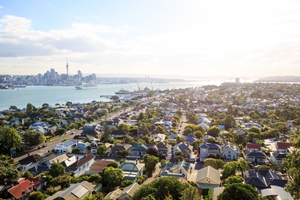 BNZ’s chief economist has been dubbed a “show-pony” following his suggestion a whopping 76,000 houses need to be built in Auckland to curb the housing crisis.

So how has Alexander done his maths?

He’s focused on how many more houses Auckland needs for the average number of people living in each house to match the average outside of Auckland.

The average number of people living in an Auckland home is 3, while the average across the rest of the country is 2.58, according to the 2013 Census.

“What we have illustrated is that a simple restating of what shortage means can lead to an estimate well away from other numbers,” says Alexander.

“Hopefully we have illustrated too that unless one were to see a massive building surge adding 76,000 dwellings on top of normal supply, it is completely unreasonable to expect any great convergence of Auckland and rest of NZ dwelling prices in the future.”

“If we really had a shortage of 76,000 homes, we would see lots of people who are homeless, and we would see significant crowding right across Auckland, and we don’t see that,” he says.

Eaqub says Alexander hasn’t considered the fact that Census figures show Auckland’s growth is coming from a growth in families, rather than through growth in small units of households.

He says Auckland’s population is younger, and more families will naturally push up the average number of people per household.

Furthermore, Census figures show the number of “complex” households, or households not only comprising of mum, dad, and kids; but mum, dad, kids, grandma and boarder, is increasing. This may also be spurred by immigrants, for whom it’s in their cultures to live with their extended families.

Although recognising there are overcrowded homes in Auckland, he says some people are choosing to live under the same roof as several others.

“It’s very much a distribution issue.”

In other words, Eaqub believes the supply of housing in Auckland shouldn’t increase at the same rate as population growth.

He says looking at vacancy rates and crowding are better ways of measuring a housing shortage, or the impact created by housing unaffordability.

Coming back to Alexander’s theory, he points out the average number of people living in an Auckland home has increased from 2.9 in 2001.

Alexander says it’s a question of how you define “shortage”.

“Usually the calculation involves picking a starting point in time, assuming no or minimal change in the average number of people per dwelling, then comparing subsequent construction with recorded population growth while allowing for some houses being pulled down, and assuming no change in the normal proportion of houses sitting unoccupied. The exercise is not straightforward.”

Mr Alexander has been quiet recently, since he ended his regular 'Economic Update' emails and replaced them with the much less-frequent 'Observer'.

The media haven't had much to quote him on recently.

As I suspected, it's all been too quiet for him, in fact. Now he has introduced 'Sporadic'. So he can get comments out more often, and get the public profile up again.

No use of the royal "we" in his recent 'Sporadics' though.

If readers ignore the pompous approach though, Tony often has something interesting to say.

So who is right ?

Kiwis returning or planning to return from Australia with families , say 5,000 units in the next 2 years as that economy slows

Young people like my offspring who are entering the market , say 2,000 housing units

Well you have to at least consider the option that people do leave Auckland, and not every migrant lives in Auckland.
Reminds me of the old saying "Doomers can't add, and Cornocupians can't subtract"

There is no data, or if it exists, it's not available, we don't have the data

Without that level of information they are simply guessing

You forgot the minuses. People can't afford - move away. emigrate (other areas and abroad). deaths. students leave when exams complete (we only ever seem to count those coming in to start education). Etc.

Wow, so in spite of all the bleating, the housing situation in Auckland has barely changed since 2001. Does this knock the 'housing shortage' meme out for the count? Probably not. Given all the ranting and raving about immigration, and lack of building etc. I would have thought the number of people per unit had risen through the roof. Not even. The housing situation is about the same as it was when house prices were affordable.

Eaqub says Auckland’s population is younger, and (so) more families naturally push up the average number of people per household.

He is highlighted that people in their 30's tend to have kids - thus a higher number of people per household - relative to say people in their 50's where their children have moved out.

Shifts it demographics tend to impact the overall mix in people per household. Therefore, what is being argued, that urban areas tend to be more densely populated as they naturally attracted younger immigrant households, which doesn't to the same extent extend itself into provincial areas.

Here's an interesting piece from The Irish Times from 2006 : http://www.irishtimes.com/business/how-the-housing-corner-stones-of-our…

By 2007, no shortage of housing was being mentioned..

That article is awesome

I would have to say Mr Alexander is closer to the target, especially given that immigration is mostly towards Auckland and shows no sign of slowing.

Down to bedrooms now!

Gosh it's almost as if Tony takes his salary from an entity that has a critical, immediate and vested interest in wanting people to be confident that prices will only go up, that they better buy quick, and one that makes a huge economic gain in lending money to them. Funny how empirical evidence shows that bank economists are time and time again overly bullish on all things that can benefit their employers.

"'What shortage and why the fuss?'"
Olly Newland

He's right. Over 32,000 properties for sale NZ wide on Trademe, and over 7000 in the Auckland region alone.
This is a left wing beat up plain and simple, and nothing more

Imagine a swimming pool with a tiny leak, and a hose refilling the pool at a rate 5x as fast as the leak.

Auckland spruiker thinking would only look at incoming water at a rate 5x the ability to absorb it (the leak). They forget how big the existing body of water in the pool is and so don't realise that it could take decades of this before any real change in the level of the water (over crowding) is seen.

What is required to keep over dense population, high price _increases_, and maintain the "anything will rent out in a week" unusual status.

Neither figure allows for loss or temporary effects like the roadway upgrades.

It always has only ever been sentiment fear and greed spurred by vested interests and the sight of anyone asian at an open home or auction that has been causing Auckland prices to rise.

PLEASE SOMEBODY CONDUCT THIS SURVEY:

take 100 random people (someone better at stats than me could design this better selecting appropriate sample sizes) in auck, another 100 in welly, another in gisborne and ask if they are planning on buying property in next 12 months.

I bet u auck has at least 2x the % of welly and maybe 4x gisborne.

The supply-demand that matters when price setting is NUMBER OF BUYERS VS HOUSES FOR SALE. This is where auck is different in a material way. And it is all based on nothing more than sentiment, able to vanish overnight.

Has he factored in the large percentage of homes owned by foreigners that are left vacant as they cant be bothered with the hassle of tenants?

China’s massive Operation Skynet fraud squad is now rummaging through Vancouver’s real estate industry. British Columbia’s police agencies won’t say whether they’re cooperating, but even if they were, it wouldn’t be easy work. Over its final decade or so, the Immigrant Investor Program drew more than 30,000 Chinese millionaires to British Columbia.

Vacancy rates in Vancouver’s posh new condo districts are perhaps 30 per cent. The city doesn’t keep track, but University of British Columbia geography professor David Ley has been tracing the trend relationship between the rise in Vancouver residential property prices and the influx of immigrant investors over the years. The lines run in direct lockstep.

Last year, Macdonald Realty opened an office in Shanghai to directly market to Chinese buyers after finding that a third of its Vancouver house sales for the year had gone to buyers with “mainland Chinese names.” Ian Young reckons that, in dollar terms, near half of Vancouver’s detached housing market in 2014 probably went to Mainland Chinese buyers.

well in a condo you can still claim the expenses of untenanted properties to offset the income, as long as the cashflow isn't negative the empty places still hold value. bugger for cashflow but if you're playing a long game that's not really an issue (think of it like a loss leader campaign for developing market share)