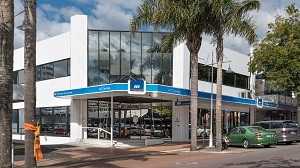 A leasehold apartment in downtown Auckland was the star of the show at this week's City Sales auction, providing its new owner with a better yield than many commercial properties.

The apartment was one of three put up for auction by City Sales this week and there was competitive bidding on all three and they all sold under the hammer.

But it was the leasehold apartment in The Docks building that stood out.

Leasehold has been well out of favour with both owner-occupiers and investors lately because of the effect that rising land values have had on ground rents, which has seen prices for many leasehold units fall through the floor.

The leasehold apartment in The Docks complex in the Britomart precinct that was offered this week was at the better quality end of the scale, with a floor area of 69 square metres, two and half bedrooms and a car park.

Once rates of $1853 and the body corporate levy (including ground rent) of $11,711 were allowed for, the yield would reduce to 7.1%, which is well above the returns most freehold apartments have been achieving and comparable with the net yields on many commercial properties.

The net yields on commercial property sales reported by Colliers International this week ranged from 5.8% for a retail property on the North Shore to 8.3% for an office building with government tenants in Tauranga.

So even though property prices are tending to rise faster than rents, properties that can provide reasonable income returns are still out there if people are prepared to look.

See below for the details of Colliers' recent commercial property sales and this week's auction at City Sales.

can get net 7% on some freehold apartments in welly still. Not for much longer though as search for yield stretches down here.

They were probably overexcited and did not work out it was leasehold and the implications of that.