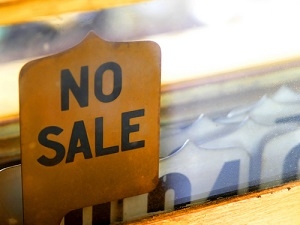 Residential property auctions in Auckland  may be losing some of their lustre with the success rate at many of the major auctions falling well below 50%.

The table below shows how many homes were sold at several major auctions conducted by Barfoot & Thompson and Harcourts throughout the Auckland region in the last two weeks.

Barfoot & Thompson managing director Peter Thompson warned in the company's October sales report that fewer properties were being sold under the hammer and vendors needed to be more realistic when setting reserve prices if they wanted to achieve a sale.

"Clearance at auctions has definitely slowed, but a significant number of sales are being concluded in post auction negotiations," Thompson said in the report.

"However buyers are no longer under the same pressure to meet vendor price expectations and the properties that are selling are those with realistic reserves," he said.

And the slow down in auction sales is not confined to houses in the suburbs, it is also occurring in the Auckland apartment market, which tends to be more driven by investors.

At Ray White City Apartments' last auction on November 5, nine apartments were auctioned and none sold under the hammer and at the City Sales auction on October 28 all four properties offered for sale were passed in.

That was a complete turnaround from just a few weeks earlier when success rates above 70% were the norm.

Great work Greg in putting those numbers together in the above chart. That provides an unbiased accurate snapshot of what is currently taking place in the Auckland property market.

This is the kind of data people need to work out whether they need to be active buyers currently. Based on what I have just read and if I was a potential buyer of anything other than trophy properties I would be sitting on my hands currently. With the kind of debt that currently props up Auckland residential homes this kind of data will probably make even more people put their houses on the market.

1. If you are sitting on a good paper profit and are thinking of selling you should do it quick.

2. If you have heavy debt on a property the servicing of which is affecting your lifestyle and keeping you awake you should sell quickly before the sellers outweigh the buyers even more so

Would be interesting to see some kind of visualisation of listings on the market going forward.

But isnt supply the problem in Auckland as evidenced by people living in public parks in tents ?

Please dont tell me the real estate companies / government / council have been wrong all this time ?

Supply is only one factor driving price. Unfortunately most people needing the homes can't afford the artificially high prices - so are sharing homes with family etc. Take speculators and overseas investors out of the mix and maybe prices could level to something vaguely proportional to wages.

The housing problem has never been about supply. Build 10,000 houses with no restrictions and all of these will be bought by Chinese investors/speculators living here and overseas. There are enough houses for everyone, but investors and speculators have cornered the market pushing owner occupiers out.

what is interesting is that you can easily spot some of the properties that were for sale few months ago.
With economy slowing down it can really hurt some of the people with big mortgages. ...

Interesting. Looks like auctions in the North Shore are being passed in in greater numbers than those in Auckland City.

I live on the shore and the agents have said to me quite openly that the market has died a death since 1 Oct. It was definitely being driven by overseas investment. Anyone buying now sold when the market was hot and can afford the prices.

John Key disagrees with you Buzby. Overseas investment was not a factor.
http://www.interest.co.nz/property/76611/pm-john-key-denies-non-residen…

I voted National last time but am starting to realise I can see when he is not telling the exact truth. His mouth is open.

True. I am not a Key supporter but perhaps their new rule is actually working - on these so called non-existent buyers.

you will like his comments on CNBC then, not even anywhere near the truth
House prices doubled under the previous government and they've gone up pretty similar numbers under us," Prime Minister John Key told CNBC, speaking specifically about Auckland, the country's most populous city.

"The population's growing reasonably rapidly; there have been supply issues, so we're doing a lot of different things. We're building a lot of houses, so to give you an example, we've got the highest consent rates and building rates for a decade, but we're building three times as many houses as we did say seven years ago when I became PM.

He's pretty much correct, I blame labour as much if not more than National.

Because that's where the most interest was previously from Chinese buyers (anecdotally of course).

In particular parts of the shore, certainly.

Seasonal movements or something else?

Perhaps I am imagining it but every where I look on the Shore I see for rent signs.
I am pleased I got out of rental properties when I did.
The yields are only about 2% and if there is no capital gain, then investors will be losers.

For houses to sell at auctions you need cashed up buyers . Those figures show there isn't as many as those around ie namely overseas money coming from china in particular and the tighter restrictions here. Its all hit the market at the same time. Those figures don't show the sales post auction and for those vendors that are more realistic, negotiation is the name of the game and the sale will be made. This is when the good agents show their true worth and show up the order takers agents that have jumped into the market over the last few years.

Or first time buyers who can borrow the amount. These are people who don't have a property to sell, or can borrow against their current property.

Now is also the time when a lot of buyers should be coming into the market, at the beginning on summer. If there aren't the overseas buyer now, then it somewhat contradicts what the government has claimed, that overseas buyers weren't the problem. With less demand, and more supply, heres hoping that prices drop quite a bit for NZ buyers who actually need a house, rather than people wanting to make a quick profit.

In Wellington, many houses don't sell at auction. But because people who were interested in the property have already done due diligence, it makes it easier for agents to negotiate afterwards with those interested parties. This is why agents prefer auctions, it makes far less work for the agents. Auctions though are not usually good for sellers, as the person buying are not always bidding up to their top offer. Whereas a tender, they usually will put in their top offer.

Well done for putting this chart together Greg !!! To me it's more telling than all the highly educated Economists views. Please, please, please, publish them on a regular basis.

The reason why it makes sense is that it's published as raw data. It gives you limited insight at a point in time.

Sydney has had its worst weekend in three years, looks like property everywhere is starting to decline except the US
http://www.domain.com.au/news/waning-sydney-auction-market-hits-new-low…

Now that overseas investors have to supply IRD details etc tells me that the Chinese buying houses here have been using money obtained from illicit sources.
It has been basically money laundering. They want this money out of China ASAP.
I believe even Chinese living here are buying houses on behalf of people living in China to get around the regulations.
The Government has known about this for years and looked the other way.
What John Key is doing is too little too late. The damage has already been done and we will all suffer when the property market corrects big time.

Laundering.......The Government sure have known this for years and if the didn't they should have .Their attitude is if the money is coming in why stop it when we need it and it makes people feel rich . Of course that doesn't help the next generation ,but these Ministers won't be around. In some respects you can't blame the Chinese for getting money out of China (they don't trust their Communist Government) Why haven't our banks asked the question as to where the money has come from when the official limit is a $50,000pa. The Banks have been complicit in money laundering and there is no other way to describe it. China seems to be tighting up the exit of money over the last couple of months because it has seem $200 Billion leave in August (Bloomberg source)
Average prices in Auckland being 9 times average the wage is not good, but with the Chinese influence reducing I expect prices to fall.
Perception is everything and if people start saying price's are to high then they are, even if interest rates are low. Kiwis have been bidding against Chinese who have just been parking money and leaving 18000 homes vacant homes in Auckland, If that has stopped what's that going to do to prices

As for which party is responsibile...It is Mirror Mirror on the wall.
Wonder whether after TPP more money will come in from Europe, US, etc..black or white money that is.