The rush to satisfy the long-term pent-up demand for housing is seeing construction costs blow out for all new builds, accentuated by a natural focus on top-end, high-spec opportunities

The rush to satisfy the long-term pent-up demand for housing is seeing construction costs blow out for all new builds, accentuated by a natural focus on top-end, high-spec opportunities 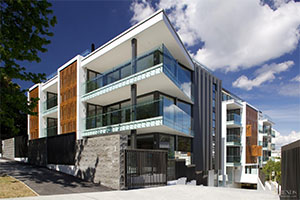 However they are 40% larger than those built 25 years ago.

House sizes grew until 2006 - when we called them McMansions - and then the bloat stopped. However it has not shrunk back much since then.

Nationally, on average, our new houses are now 218 square metres (about 2,350 square feet).

In Auckland, they are even larger at 233 square metres (about 2,510 square feet) up about 7% compared to the national average

Perhaps a reason the size has stopped growing is that the cost of construction has not.

The data for Christchurch is interesting too because it straddles the earthquake recovery period.

The sudden demand has pushed average construction costs in Christchurch to $1,884 per square metre, and they are now higher than the Auckland 2016 average of $1,816 per square metre.

Most of the focus around the current housing bubble is on the dramatic rises in land prices. But new supply may also be being constrained somewhat by these eye-watering jumps in construction costs.

And the increases are not just limited to houses.

The costs for building apartments is even more eye-watering and actually more expensive on a per square metre basis than for houses, even if each unit is smaller.

It gets 'worse' in Auckland.

Today it is costing a remarkable $3,082/square metre to build an apartment unit, one that averages just 123 square metres.

In inflation-adjusted terms that is 136% higher than 25 years ago, but more worrying it is up 118% in real terms in just the past 10 years.

Higher spec apartments will be a big part of this shift.

Developers are facing rising demand from boomers who are downsizing and they want high-spec alternatives.

Given there are growing construction capacity constraints, why would any developer want to build lower-priced entry level units for buyers desperate for accommodation.

That constraint will be equally true for building 'normal' multi-unit rental accommodation.

Renters may be being sidelined into existing-builds that lose their attractiveness for home-buyers. Given the level of demand, the supply responses will not be focusing anywhere but the top end until that demand is satisfied.

If you have read this far, you should know that all the above data is based on building consent figures.

As anyone who has filed a building consent knows, the actual project rarely comes in at those cost levels - its always an experience where you end up spending considerably more.

So the real figures will probably be worse than those outlined above.

ANZ comment in my mailbox:
The construction sector is one of the key reasons for New Zealand’s decent rate of economic momentum at present. We expect that to continue despite a peak in the Canterbury earthquake rebuild. However, if we have any concerns they are over the sector’s ability to continue to maintain strong growth given signs that capacity and resource pressures are already starting to emerge.

Are past deflationary impulses supporting bank economists' demands for perpetually lower funding costs about to be extinguished?

Wow, those costs/m2 look cheap.
In Queenstown a neighbor received tenders for their shadowclad garage - $2500/m2!!!!!!! It is just a double garage, concrete floor on a flat site.
The range of building costs are considerable. Code minimum (entry level) houses can be built for $2050/m2 for a 200m2 house (still a $410,000 build cost Plus driveway plus landscaping plus decks plus land at $250,000 if you can get it).
Then there are the more energy efficient - $4000/m2 and upwards.
Take your pick.

You might want to tell him to call A1 Homes...

Let's spin the well-scratched record once again. Here's a sample of reasons (none of which existed 15 years ago) for the per-square cost explosion:

Common taters may care to add their own items to this little list.

Way too much practical thought in some of that Waymad. I believe you are still able to build a house for yourself, however there are reams of paper hoops to jump through first.

With time, not just some particular stuffs but all the aspects are getting raise in their cost and building and apartments are at the top position. From the past few years the cost of land or house have increased a price of double or even triple. So as the maintenance would also be tough. You have presented a clear and practical data, and I appreciate that you have worked a lot on it. Thanks for posting. Apartment Property Management High Point, NC.

Please read the following article and spread in all sovial media and support http://m.nzherald.co.nz/property/news/article.cfm?c_id=8&objectid=11649873

Why open up more residential land for more overseas-originated buyers?
.
Be very careful selling your house now, as you may not be able to afford to buy another property.

I know a fair few here in tga that have sold and have been unable to find a rental or a house to buy back into forcing them to move out to the perifery like te puke...

extracts from that NZ Herald article

They are consistently seeing a large proportion of Special Housing Area (SHA) houses being sold, off the plans, to overseas investors

The Government's reluctance to act might be due to the contribution that overseas investment makes to the economy, the lawyers said

So the NZ Govt is keen to open up more residential land and housing for foreign-related buyers.
This is related to 'Free Trade" Agreements or globalisation ideology, or 'anything to get new money flowing into NZ'? There must be a rationale for this strategy. Surely?

DC, I've received a commentary on the NPS from a top environment lawyer. I'll check as to the publicity possible.

Need of the hour is expose the inaction of government and are so arrogant that they feel they have sucessfuly managed to pass the blame on council n supply instead of taking some immediate action though will not be silver bullet but so is supply only as it will take few years and is giving enough time to speculators to play. Fail to understand that enough damage has been done still the government is supporting the speculstors as if 2 bedroom unit for a million dollar is not enough. They have to be exposed and shamed

This is the only ecenomy that is doing well n for that reason government is doing nothing to control the speculation for if it burst the myth that NZ is doing vey well will burst. It will burst but government is trying to hold it till next election so anyone wanting to do major renovation may wait.