Housing rents in Christchurch have fallen for 14 months in a row, are rising marginally in Auckland and surging ahead in the Bay of Plenty

Property
Housing rents in Christchurch have fallen for 14 months in a row, are rising marginally in Auckland and surging ahead in the Bay of Plenty

Housing rents in Auckland are rising much more slowly than in other parts of the country and are steadily falling in Christchurch, according to Trade Me Property.

The median asking rent for rental properties advertised on the website in June was $430 a week, which was up just 2.4% compared to June last year.

However when Auckland properties were excluded from those figures the median asking rent goes down to $380 a week while the annual increase goes up to 5.6%.

In Auckland the median asking rent in June was $510 a week, which was up 3% compared to June last year.

"Tenants in the Bay of Plenty took a $3,120 hit to the wallet over the past year, with median weekly rent for a typical property up a whopping 17% on a year ago to $420 a week," the head of Trade Me Property Nigel Jeffries said.

However rents haven't been rising in all regions.

In Christchurch the median asking rent in June was $400 a week, down 9.1% compared to June last year.

Jeffries said tenants in Christchurch had benefited from a steady decline in rents but it was a different story for landlords.

The median asking rent in the city had declined by $50 a week since June last year, he said. 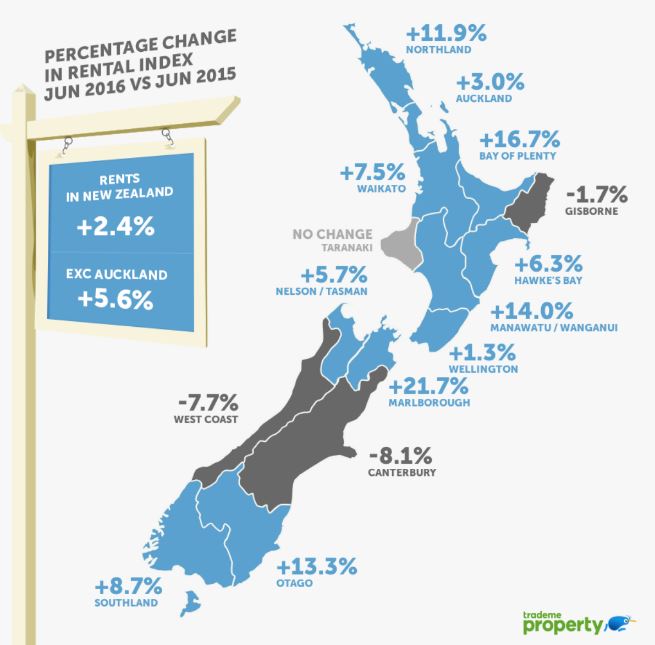 The limited increase in Auckland rentals proves that the on-going Auckland bubble is not driven by immigration.

'rentals as high as the market can handle' is the same thing - proof that there is not an excess of demand. It also highlights that the rentals are only sustainable in Auckland at about this level. which means that if prices went up further people would increasingly relocate from the region - which also suggests that house prices are above the viable economic level.

Agreed with your last point. Demand and price are different things though. You can have large demand but a tapering off price. This isn't your basic supply and demand X graph

Your dreaming mate. Mortgage interest rates and cost of funding rentals is falling increasing over all yields on rentals with no rise in rents. The demand for rentals is rising which is consistent with an increasing population driven by immigration.

Should interest rates continue to fall expect rents to fall other things being equal.

Another double digit gain gain for Palmy. As the international students continue to flow in. Much cheaper to buy then rent in most cases. The locals are catching on though based on the open homes I've been too

Thanks to the new rules and the cost of new housing supply I see rental costs in AKL heading northwards in coming 1-2 yrs at least.

so.. you're saying that if landlords don't charge more to tenants right now is because they don't really want or because they make "enough" money?

I don't think so, I am surrounded by re-flipped ghost houses in my suburb on the Shore, mostly Chinese owned. As soon as the market turns they will be dumped back on the market again or rented to get "some return."

May I wish our property investing friends all the very best of luck in their future endeavours.

Auckland is becoming an undesirable place to live if you can avoid it. I spent 3 years there and only the idea of going back there makes me sick (hopefully I don't have to).

If you look at skilled positions' salaries Auckland is one of the only places where salaries are decreasing. Why? Because immigrants go to Auckland and they accept lower salaries at first until they secure their visa migration status or until they get enough NZ experience to be able to demand more as perfectly explained here:
http://znze11wt5g3330m4e3it6h2a73-wpengine.netdna-ssl.com/wp-content/up…

There might be more immigration, but the current rents are the maximum people can afford to pay before thinking twice whether to stay in Auckland or to go somewhere else.

I think nowadays more immigration in Auckland means more density of Indians per room, and not higher rents. And if you don't believe me have a look at flatmates' ad's :-)

IT wages down in auckland due to immigration no wonder inflation is not growing with low wage inflation
http://www.nzherald.co.nz/technology/news/article.cfm?c_id=5&objectid=1…

LOL, absolutely agree. We do AirBnB, had a lovely family from New Delhi arrive for a week to stay upstairs in our spare room advertised for 2, but the numbers grew quickly to 4. I did think about using my neighbour's ghost house as it is been empty for several months ;-)

The Christchurch rental situation is living proof that making thousands of homes/plots available, in a relatively short space of time (given NZ's historically leisurely development cycles) has, quelle surprise, flooded the supply side of the equation sufficiently to plateau both house prices AND rents.

The houses you linked to are still very poor value for money. In scummy areas with no land.

Sections in Rolleston are being horded by building companies and generally are on the small side for a suburban section. Housing is nearly all one story high. Sure it's not Auckland crazy but it's still around $200k to get 600m2 of land, a good portion of which has to be used for street appeal.

This is the kind of result you end up with; Wigram Skies
http://www.stuff.co.nz/content/dam/images/1/9/u/v/h/v/image.gallery.gal…

They may be on small plots, sure. That's one of the trade-offs - it's known in the trade as 'densification'. You may have heard of it.

Being built to current standards, those houses are warm, weathertight, and quake-resilient.

And they sell like hot cakes. Ms Market has voted with her dollars.....

Helps when a whole bunch of people bail out and don't return too, which of course suppresses demand. Quelle no surprise at all.

Christchurch population only dipped briefly by a small amount 2011-2012, it is since up and the migration rate continues to grow, though not at the same rate as Auckland (about 12,000 net population growth in 2014-15 vs 30,000 net in Auckland). This is all about supply.

Greater Christchurch now extends to Rolleston, Lincoln, Rangiora, Kaipoi, Ashburton and Amberley. Populations shifts, not diminution. All these towns have boomed like crazy.

Add the fact that recreation is literally an hour away: ski at Porters or Hutt, fish 200km of shoreline and fish or raft three major braided rivers, plus the real mountains another 1/2 hour away.