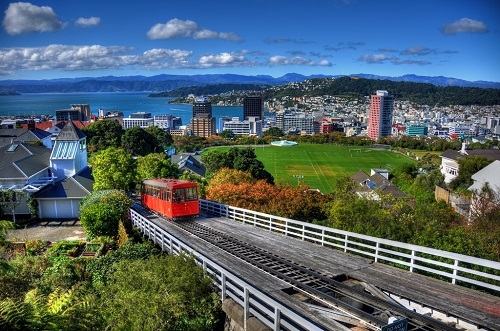 In an announcement Monday, Lester said the land would meet an estimated 14 years of demand for Wellington Greenfield sections. Lester in a press release did not name the land owners, and the council did not wish to comment further.

But Interest.co.nz understands the majority of the land is owned by Rodney Callendar, who helped develop the city's Churton Park suburb. The call from Lester was designed as a friendly poke to the land owners, it is understood, rather than an antagonistic move from the Council.

In a Fairfax article last year on land development opportunities in the city, Lincolnshire Farm was tipped along with Takapu Valley and Ohariu Valley as potential greenfield development sites in Wellington

See the announcement from the Wellington City Council below:

The Capital will look at ways to encourage the development of thousands of new homes on the city fringes over the next ten years, says Wellington Mayor Justin Lester

Speaking at his State of the City speech today, the Mayor says he views opening up new land as a crucial way to address the city’s housing issues.

“I’m announcing today that we will be using our next Long Term Plan to develop ways to encourage owners of land on the city fringes to develop it for new homes on the market.

“Right now, Council officers have identified 490 hectares of undeveloped land – enough for 2750 new homes – enough to meet an estimated 14 years of demand for greenfield sections. Of those 490 hectares, 90% is owned by just two groups.

He says there is strong public interest in increasing competition for development of that land.

“Everyone knows if we want to keep housing affordable in Wellington, we have to be developing new land and building new homes. We’ve had good discussions with central government about our intention to increase competition in that area and they are supportive,” says the Mayor.

“Council has already done its part – we’ve announced we will be building 750 new units of social and affordable housing over the next decade on the land that we own. Now, it’s time to look at ways we can encourage private sector owners to do the same.

“We will be developing specific measures over the coming months but I want to signal today that we will look at every available option – including financial incentives or penalties – to ensure our city has the pipeline of new homes it needs.

Left wing mayor who cares enough about the welfare of Wellington to encourage development on the city fringe.

Why can't we have mayors like this in Auckland? Why is it when Auckland elects left-wingers they ban development at the city fringe and build hugely expansive sprawls miles off in the distance?

I really don't know what the problem is as everyone that runs for Mayor in Auckland just seems to be right wing and pumping people for every dollar.

I'll be interested to see what pressure goes on land bankers if they continue to sit on the land.

Auckland is in so much debt yet needs so much more work it is not surprising every mayor wishes to raise revenue in order to fund anything.

And home owners want the services but squeal when asked to pay for them, despite having some of the lower rates in the country.

Rick you're right The rates people pay are entirely inadequate to run cities like Auckland & Wellington only got
things like its electric rail because its the capital city. Otherwise they simply wouldn't have ever been able to afford it and other perks like TePaPa ?
1.5% land transfer tax & 1% yearly property tax Thats what people pay where I live now.

To replicate the "Auckland Approach" to planning Mayor Lester of Wellington will need to ban development at the rural urban boundary AND invest all of the money quadrupling the size of somewhere absurdly remote - Makara Beach for instance.

People only respond to incentives. It's time to bring back universal land tax.

For the purposes of section 13(2)﻿(b), categories of rateable land are categories that—
(a) are identified in the local authority’s funding impact statement as categories for setting the general rate differentially; and
(b) are defined in terms of 1 or more of the matters listed in Schedule 2.

Matters that may be used to define categories of rateable land

So, once the Councillors discover their vertebrae, and pass it into their rating resolutions for FY2018, a differential rate levied in terms of Schedule 2's clauses1,2,4,6 and 9 should do the incentivising trick.

I'd personally add a rider: that the proceeds of this rate be offset against any other Modest Fees that WCC might feel inclined to charge for the subdivision (e.g. DC's or FC's) and the provision or extension of infrastructure needed.

Thanks for the info. Also, NZ used to have a land tax at the central government level. They phased it out and replaced it with the regressive tax GST. That was a devastating blow to NZ's economic efficiency and egalitarianism.

That GST was sold to public as the first stage before a 20% Flat income tax rate across the board but David Lange chickened out.
I am not a Roger Douglas fan because he took free flights on the taxpayers of NZ in his retirement but his 20% Flat income tax would've transformed NZ and stolen a march on Australia . Sadly it never happened & Australia got its own act together and hence the NZ brain drain went on for years.
Then the lie that GST would remain at 10% was broken twice later
Thank you JK for the last 2.5% increase plus fuel tax plus GST on top of the fuel tax

Yes, a differential has always been an option for all councils to deal to landbanking - and WCC have applied it (the differential rate) so admirably to commercial property for years, if I'm not mistaken!

Land tax most definitely Doesn't that go with Land Bank ?
We get taxed on money in savings accounts

Frightening. Authoritarian. What's next? Isn't there a word for a government forcing people to do things for the 'Greater Good'? Fascism.

You apparently have no experience dealing with Councils under the regime imposed by the National Party. The fact that the Mayor wants to provide incentives to break up a monopoly on land should be celebrated by those that support free markets.

My grandfather's farm was compulsorily acquired for the purposes of state housing in the 1950's. Was that a fascist action by the government? I wonder whether I could lodge a grievance...

What a stupid comment.
Learn what Fascism is and how and when to apply it.

And learn some basic German, while you are at it...

The article is about the elderly property developer Rodney Callendar and the suburb Churton Park, which is just about Wellington's only new suburb for the last 20 years
http://www.interest.co.nz/opinion/52337/mondays-top-10-nz-mint-hotchins…