Construction cost increases greatest at the top end of the market, QV says

Construction cost increases greatest at the top end of the market, QV says 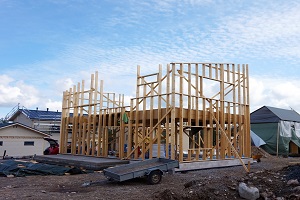 The average cost of building a home rose by 3.5% in the 12 months to May, according to QVcostbuilder, an online tool provided by Quotable Value which monitors building costs in Auckland, Wellington, Christchurch and Dunedin.

However the total costs of buying a new home may have risen by much more than that, because the costs monitored by QVcostbuilder exclude the cost of land and certain other costs associated with building a new home such as the demolition of any existing buildings, council and legal fees, and finishing work such as forming driveways and landscaping.

The figures also suggest that most of the new homes being built are likely to be towards the upper end of the market, because the rate of cost increase for more modest homes was below the 3.5% average.

"it's important to remember the average cost of building a home will always be dependent on the level of finishes, internal layout and whether it has a single or double garage," QV spokesperson Andrea Rush said.

Avearges tell only part of the story. In Qtn

"White Fang' was in town and you couldn't rent a kennel for $500 per week. But having just gotten of the plane from the UK ( I swear, they have 'spotters' at QT airport to direct new arrivals to The Gang - usually a solicitor & a R/E agent & a developer!) and having just built in London, the equivalent of £800 per m2 seemed cheap! It did take 10 years to 'break even' when the place was sold in '03. But in the meantime? The rents of $500 per week went to...$50 per week or $0 as the place was awash with untenanted 'investments'. QT; a true place of Boom and Bust.....

We have a client ( builder ) who has is attempting to price what should be a $20 million construction job , and on calling for prices and tenders from subcontractors , received either just one response ( at OTT prices ) or none at all .Quite simply the construction sector has so much work they simply cannot take on any more.

The estimate has now gone up by 25% and the project looks to be unviable .

NZ is becoming an expensive place to get a roof over one's head - whether one buys or builds.

It is hard to believe how expensive is everything related to construction compared to Europe. From what I have seen is anywhere from 5 (gyb board) to 20x (copper pipe elbow) more expensive!
And do not tell me it is the freight... induction stove is $1000 in Europe and the same model $4000 here! bringing 2 in the container pays for the full container.
Then you add paints, tiles etc. not mentioning the labour where eavey contractor is driving brand new truck and will not answer your call unless he will be able to rip you off $600 for 2h work!

Jerry this applies to EVERYTHING in NZ, its quite ridiculous here now. Believe it or not I even get my spark plugs from overseas now, try like USD$7.80 for a platinum plug in the USA and NZ$40 for the same plug here. Even with huge freight if you get a couple of sets its still half price. Its gets worse like I get my washing machine parts out of the UK because they are 3 to 4 times the price in this country and the list goes on. This is only small stuff but I refuse to pay the local prices where possible.

Anyway with the cost of a new build going up 3.5%, how can anyone possibly think there is going to be a price crash ? basically the cost of building my house just went up $15K in a single year. In fact re-building my house now has gone through the roof with all the changes since 1997, what with double insulated windows and the water system required the accumulated re-building cost of a near identical house would have doubled since then.

It is the lack of competitive product, the ridiculous controls the likes of Fletchers and Carters have on the marketplace.
The supply cartel (which BRANZ are party too) is the issue. We get right royally tucked on building materials.
Cost of building has little to do with the price of a house. Once the market falls away, less building happens, suppliers and tradies vying for less work and wallah... prices go down, builders go bust, market influence. Amazingly there have been some monumental builder fails even in this market place, but some people can break sledgehammers in sandpits.

Still can't quite fathom why land and build packages, for superior property outside of Brisbane, and Melbourne for that matter, are comparatively cheap. Can anyone shed some light?

... for a start , it could be that their bone dry dusty sunburnt red soiled sections are a fraction of the cost of our cold clammy swampy earthquake shakey lots ?