COVID has made income inequality worse, and has probably made wealth inequality very much worse, maybe wealth concentration is as high now as in 1905

Public Policy / opinion
COVID has made income inequality worse, and has probably made wealth inequality very much worse, maybe wealth concentration is as high now as in 1905 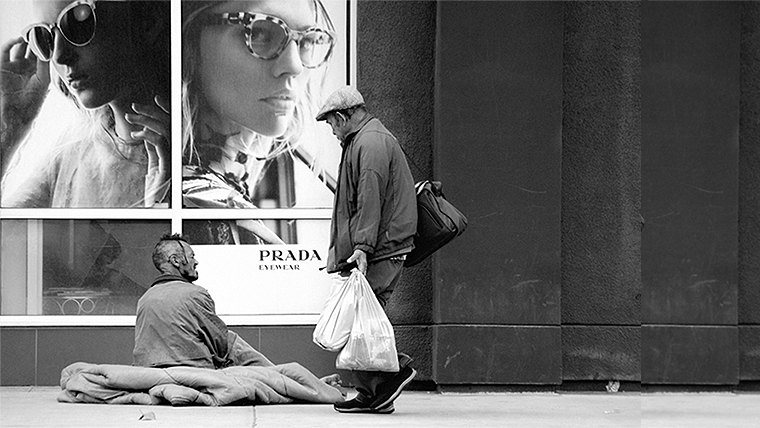 Pandemics were one of the “four horsemen” described as reducing economic inequality in Walter Schiedel’s 2017 book “The Great Leveler: Violence and the History of Inequality from the Stone Age to the Twenty-first Century” (the other three being war, revolution and state collapse).

COVID-19 has sparked public awareness about the inequalities that already existed in the world but will it be a “great leveller” or will it make inequality worse?

Results from early studies into the economic impact of the pandemic suggest that inequality initially decreased due to plunging share markets and massive government support for workers and businesses.

Estimating the current impact of the pandemic on inequality is difficult, because the data to measure inequality is produced with a significant time lag. However, Helen Hughson argues in Economics Observatory that a certain amount can be inferred by changes in asset prices, expenditure and savings patterns and debt levels. For many countries changes in these indicators suggest that after an initial decline in inequality in the early stages of the pandemic, wealth inequality has continued to grow.

Spurred on by the extremely loose monetary policies of most central banks, asset prices accelerated in 2020. Despite the severe recession in the second quarter of 2020, stock markets recovered quickly and reached new highs in 2021, while house prices have soared. This has been a boon for the super wealthy with billionaires worldwide getting 54 percent richer. Meanwhile many middle-class homeowners have also benefitted, adding tens or hundreds of thousands to their wealth through increasing house prices and record low interest rates. Michael Dauderstädt writes in Social Europe that this new-found wealth is likely to increase income inequality over the medium to long term through the incomes asset-rich owners derive as rent.

Household savings grew sharply across all OECD countries in 2020 due to a combination of lockdown-related constraints on savings and rent and mortgage deferrals. However, this has not been equally spread. A report from the Bank of England showed the accumulation of savings has been concentrated amongst wealthier households while low-income households were more likely to have run down savings since 2019 rather than increased them.

Savings have also been falling in New Zealand with the latest data showing a household savings ratio at 0.4 percent in the March 2021 (after rising to 14.7 percent in June 2020), down from 1.2 percent in December 2019. Those at the bottom end and those on fixed incomes are also likely to be impacted harder by inflationary pressures on everyday items with inflation running higher than wage growth.

Wealth and Income Inequality prior to COVID-19

New Zealand’s income distribution has been relatively stable for the past 20 years. According to the World Inequality Database NZ’s “middle class” was squeezed sharply at the end of the 1990s, but income share today is similar to what it was in 2000. The top 1 percent and top 2 percent income share have both increased marginally while the bottom 50 percent income share is much the same as it was at the beginning of the century. 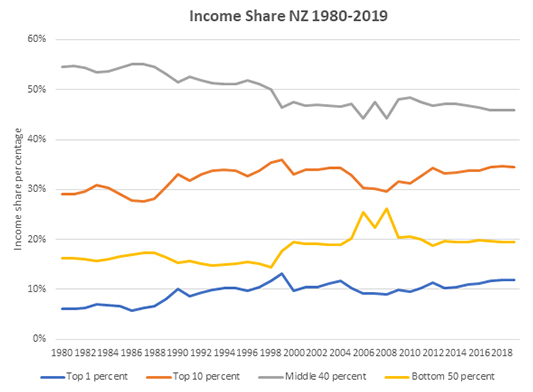 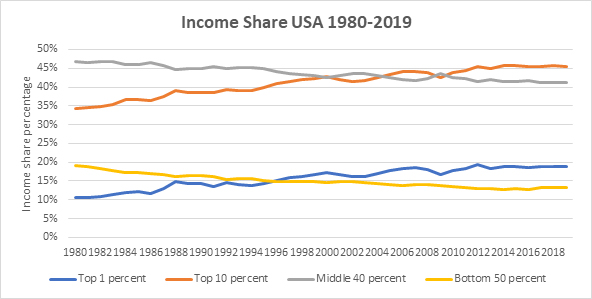 While some measures like the ratio of high to low household income households appear steady in New Zealand for the past decade, these do not capture disparities in wealth according to Deloitte’s post “The Rising Divide”. In New Zealand’s case wealth disparities are largely due to those who own their own home as opposed to those who don’t. Home ownership rates have declined in New Zealand to 65 percent and are now at the lowest level since 1950s. 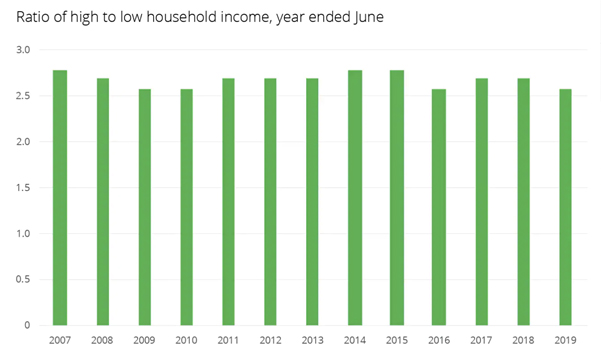 Wealth tends to be much more unequally distributed than income and is much more difficult to estimate according to a 2021 working paper from the Institute for Governance and Policy Studies. This is because of the under sampling of the very wealthy and the potential for under-reporting of financial assets. The paper, titled “Wealth Inequality in New Zealand” shows that before the pandemic, the wealthiest 10 percent of asset holders in New Zealand held 59 percent of all wealth while the poorest 50 percent held just 2 percent of wealth, a proportion that did not change much between 2014 and 2018. Their analysis indicates higher levels of wealth inequality in New Zealand than in comparable developed countries. 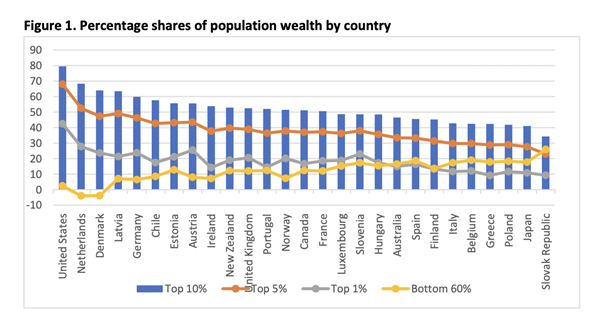 Ultimately it is the increasing concentration of wealth that will be the most destructive long-term effect of the pandemic. As Josef Stadler, head of UBS’s global family office department said in 2017 “Wealth concentration is as high as in 1905, this is something billionaires are concerned about. The problem is the power of interest on interest – that makes big money bigger and, the question is to what extent is that sustainable and at what point will society intervene and strike back?”

This can't be right. Treasury assures me that house price growth decreases inequality, which means that COVID has inadvertantly made us all more equal than ever!

I have a feeling Treasury's crazy new report is going to become a symbol of our new gilded age. The sheer embodiment of the mentality that has caused this injustice in society.

Covid did not make inequality worse. The main central banks' and the RBNZ's conduct definitely did, as the unwillingness of successive NZ governments to properly tax residential property speculation.

you beat me too it.

This article is confusing wealth and income- they're not the same thing.

The income share in NZ looks so much better than the USA.

It would help if you actually read it.  " Wealth tends to be much more unequally distributed than income and is much more difficult to estimate according to a 2021 working paper from the Institute for Governance and Policy Studies."

I'm surprised that you missed the oxymoron in the quote you posted.

If it is difficult to estimate wealth distribution, then the "tends to be much more unequally distributed" is an unproven hypothesis and a mere speculative conclusion on relativity.

It helps if you actually think about it.

we must also not allow inequality to take hold in our recovery. In fact we need to take this opportunity to improve the prospects of all New Zealanders and tackle those long-standing divisions

I remember this vividly and actually thinking they gave a sh*t...

Imagine if alongside the daily covid case numbers we also got to hear how many kids were lifted out of poverty the same day?

I would probably watch. Bloomfiled "We have 210 cases of Covid19 today. No deaths. However another 430 kids were thrown in to poverty on account of our response to covid19. As you can see our strategy of prolonging the lives of a few incredibly well aged individuals with multiple serious co-morbidities at the expense of the younger generations is successful".

Um no. It's our strategies that have confined it to that. Left to itself, this virus will kill at any age. You are only fooling yourself to believe otherwise.

The virus has killed 25 under 18's in the UK. Half of these were children categorised as " underlying complex disability with high health-care need". That leaves 12 presumably somewhat healthy children. There are 12 million under 18's in the UK. So the odds of a healthy under 18 contracting covid19 and dying is about 1 in a million.

Kids have more chance dying in a car crash or from meningitis. The later of which the NZ govt refuses to fund for vaccination.

My response was specifically aimed to the comment "Left to itself, this virus will kill at any age".

So the virus killed no one under the age of 18 and there were no miscarriages from covid... nope still the massive death rate in comparison of not being dead and it gets far worse for those younger in countries with higher rates of childhood asthma... oh lets look at how we do for asthma rates... want to take a guess. The fact we have also really bad  rates of rhematic heart disease and diabetes (of all types but much higher rates in children as well e.g. type 1 &2) it is looking far worse for NZ than the UK population which actually has a far better health system. That millions had been permanently disabled, approx 10% of covid infected in the UK as well does not bode well for NZs already killer health system. Killer in the literal sense.

Nailed it donny11 ... I said from the start we should have had a reasoned cost (full cost, including all impacts) vs benefits analysis...

For perhaps the first time, a decent article from this source - kudos.

But no, the long term impact of the pandemic will be to slow down the impact of the Limits to Growth. Those other horsemen are at the gate.

It won't until we all, especially politicians and economists, realize there ARE limits to growth and embrace falling birth rates etc.

To me, the main driver of inequality are the green movement fanatics stopping the release of land. As Don Brash pointed out this week, a 400 square metre section next to the Auckland "Rural Urban Boundary" now costs about $900,000 (!!!!???).

And this problem is happening globally. Wherever green morons rule - the poor suffer...

You hit the nail right there... the problems started in the 80s and 90s with greens and labourites being voted on to city councils. City (without) Vision

Sunchap - don't blame others. This is a finite planet - humans have commandeered most o the usable acreage, are overshot, and will collapse.

But oh no, it's the greenies fault?

Growth was the problem - and the stupid people who thought it could last forever, doubling-times and all.

NIMBYism doesn't seem to conform to such tribalistic notions. National maintained the RUB, ACT embraces NIMBYism, and since when is Christine Fletcher from the Left/Greens?

Thanks, I enjoyed they story. It's sad for society but both of our major political parties are wedded to a neoliberal ideology and I doubt that'll change soon.

We are capable for voting for real change, if only we would put self interest aside for a moment, try to be better ancestors and vote for it

Most young Kiwis would argue they did vote for it. The current government is has just used bait-and-switch once they got their hands on the levers and done almost nothing, and since then have done even less with a total mandate.