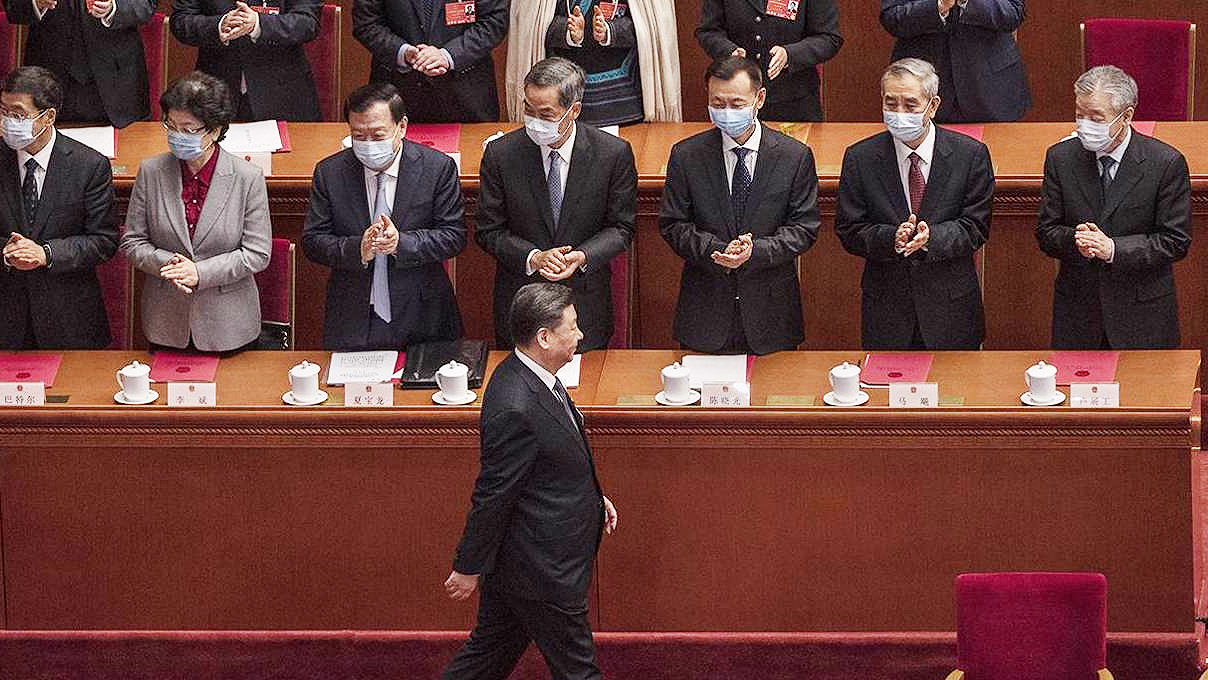 Earlier this month, as Russian forces shelled Ukrainian cities and COVID-19 infections soared, Communist Party of China (CPC) leaders gathered for their most important annual political meetings: the National People’s Congress and Chinese People’s Political Consultative Conference. While the weighty documents and lengthy speeches that defined both meetings hardly mentioned the pandemic, and did not mention Russia’s war at all, China – and its already troubled economy – is undoubtedly being rocked by both.

For much of the last year, the CPC’s “common prosperity” campaign has dominated Chinese government rhetoric. President Xi Jinping has frequently described common prosperity as “an essential requirement of socialism.” But important questions about the campaign’s contours remain, and many observers expected them to be answered, at least partly, at this month’s twin sessions.

To be sure, economic headwinds are nothing new. While the annual Central Economic Work Conference last December presented an upbeat forecast for China’s economy in 2022, it also highlighted risks stemming from contracting demand, supply shocks, and weakening market expectations. The main goal for the year, policymakers concluded, should be “stability.” Specifically, stability would require policymakers to limit contagion from the weakening property sector and resist the temptation to over-stimulate the economy.

In the past three months, however, the challenge has become far more formidable. Rising COVID-19 infections have led to a spate of lockdowns, threatening to exact a heavy toll on already-sluggish consumption and service industries. Meanwhile, Russia’s war on Ukraine has driven up energy, commodity, and food prices, which will cause inflation to accelerate and hit Chinese exports as global demand weakens.

In this context, meeting the Chinese government’s 5.5% target for GDP growth this year will probably be impossible, though the country’s leaders may massage the numbers to claim success. Even 2.5-3% growth will be difficult to achieve. To boost growth and avert a significant rise in unemployment, China’s leaders already plan to reduce taxes and fees levied on small firms, and to increase transfers to local governments. But more action to stimulate the economy should be expected.

So, the common prosperity campaign has been sidelined for now. Nonetheless, it is likely to remain a totem for Xi, as he pursues his goal of making China a “great modern socialist country” with an advanced economy by the time the People’s Republic celebrates its centennial in 2049. Success, in the CPC’s view, requires addressing the adverse consequences of 40 years of single-minded emphasis on economic growth, which have left large economic and sectoral imbalances, as well as yawning income inequality and deep regional disparities.

If ignored, the CPC fears, these problems could endanger social and political stability. But rather than addressing them as a Western democracy might – with social-welfare policies – China’s government is mounting a political campaign to mobilize people behind policies intended to expand the economic pie and produce a fairer distribution of income.

A remarkable feature of the common prosperity campaign has been the tightening of state control over private firms, and the stipulation of a more orderly “expansion of capital.” Since 2020, when the CPC Central Committee issued its “Opinion on Strengthening the United Front Work of the Private Economy in the New Era,” private firms and entrepreneurs have faced greater political interference and increasingly intrusive regulations.

For example, at firms with three or more Party members, Party committees in or near operational management are being encouraged to become more involved in recruitment, staffing, supervision, and compliance. More broadly, private firms have faced a blizzard of new regulations and investigations, involving, for example, antitrust, data privacy, and security.

Technology, data, and finance platforms have been the primary targets. But the education, health-care, and housing sectors, as well as any company operating in the gig economy, are also in the government’s crosshairs. In housing, state enterprises are now re-entering the market for the first time in 40 years, in order to purchase the assets of overextended property developers.

In an effort to align the private sector’s interests with those of the CPC, and under the threat of regulatory interference, leading firms like Alibaba and Tencent are making donations to Party programs, in what can be described only as coerced corporate philanthropy. Billions of dollars in donations and pledges have already been offered.

China’s recalibration of industrial policy and corporate governance, designed to bring private firms and entrepreneurs to heel, may well rein in some private-sector excesses. But by asserting the political control it craves, the CPC risks destroying the incentives for the innovation and productivity that China needs.

Despite the advantages enjoyed by state-owned enterprises in China, private firms have been the more powerful engine of economic growth and development. As Vice Premier Liu He noted last year, the private sector accounts for more than 50% of taxes, 60% of GDP, 70% of innovation, 80% of urban employment, and 90% of new jobs and companies.

Common prosperity denies the market-oriented policies that have enabled China’s rise and marks the formal end of the era of reform and opening up launched by Deng Xiaoping. But at a time when COVID-19 border controls and perceived complicity in Russia’s aggression are already threatening to exacerbate China’s isolation, the common prosperity campaign is at risk of being undermined at home and overtaken by events abroad.

George Magnus, a research associate at the University of Oxford’s China Centre and SOAS University of London, is the author of Red Flags: Why Xi’s China Is in Jeopardy (Yale University Press, 2018). Copyright: Project Syndicate, 2022, published here with permission.

China is a behemoth, where state and private enterprise is murky and blur.

the west fears anything bigger and better than it, and trys all dirty means to separate it, smear it, slow it and destroy it.

Neither side is ever clean. The west has many skeletons but has slowly improved over the decades, but China continues on the same path - denying its mistakes such as the cultural revolution, XinJiang, Tibet, Tiananmen Square, Hong Kong, S China sea, etc.

China has two areas it could reform, but chose to only do it in one - the economy. But now it realises that it still needs control of the economy because as people get richer and more educated, they see more of the world and learn to think for themselves. They see the faults of the political governing system.

The CCP does not want to change, even as it tried to change the economy and the people's standards of living. That's why there's been the crackdown on outspoken individuals such as Jack Ma and the tech sector, which has access to the world.

Nobody wanted to ever destroy China when it opened up to the world or Russia when the USSR dissolved. Yes, there will be some greedy corporations wanting to exploit, but most of the west just wanted China (and Russia pre-Putin) to integrate into the global economic and financial system and work together to have a stable world economy.

Nobody really wants world domination any more. That's just too much work, really. And we give governments too much credit for competency and intelligence to think they are well-organised and -trained enough to carry out that mission. It's hard enough running one country and government, let alone a whole region or world. The (lack of) effectiveness of the UN and EU surely backs my point of view up.

I'm not an expert in international politics, nor do I know how to run a country. But I found this article, very interesting and well worth a read.

Palladium is an alt-right bias publication. I was wondering how the various alt-right fan bois were doing in these comments lately.

Trump still your big hero? Still happy that your boi Putin was working hard to hack and manipulate social media narratives to destabilise the West with Brexit and Trump? Or we pretending like Putin is still a super cool guy? Not the guy secretly pushing an alt-right agenda the last decade? Super easy to swallow a narrative that you want to believe isn’t it. Never mind about bias or fact checking.

The US certainly wants world domination and is capable of maintaining it if they are smart enough.  I'm sure China is also aiming for world domination, for either side control of Russia will be key.  I'm not talking short term 50 years but longer term.  The worlds resources are finite and a very large proportion of them are in Russia.

The big brains in the world think in 500 year timeframes, and that is very important for nations and dynasties.

The big brains in the world think in 500 year timeframes, and that is very important for nations and dynasties.

Give me some figures to back up your assertion that "a very large proportion of the world's resources are in Russia". According to the 2020  BP Statistical Review of World Energy, the Russian Federation had 6.20% of the world's oil reserves. On a  Reserves  to Production ratio(R/P), these would last for 25 years.

Right now India is probably not big enough economically and powerful enough militarily for the USA to consider it a peer/near peer competitor. And India is a "liberal democracy" so less of a threat to the USA. India's human rights record isn't that great, just ask the muslims in India.

Such reflexive brittleness in the face of any criticism is a mark of immaturity, and of the CCP

I've noticed this about the author:

George Magnus, a research associate at the University of Oxford’s China Centre and SOAS University of London, is the author of Red Flags: Why Xi’s China Is in Jeopardy (Yale University Press, 2018).

I haven't read this "press/book" (above) published in 2018. The title says that China is in jeopardy. More than three years later China seems to be still doing ok...?

Thanks. I was able to find a video and will watch it.

Good on you. I will give it a miss. Much prefer to read/watch things that are unbiased. The title already puts me off.

I'd much prefer a US hegemony to a Chinese hegemony but I agree we need to be realistic not biased and uninformed.

If the world is truly "liberal democracy" we shouldn't have to live under any hegemony and states should not be bully by a stronger state?