An explainer of bank capital, how it is regulated and set, and how it has changed over recent years, especially the buffering freeboard levels

Banking
An explainer of bank capital, how it is regulated and set, and how it has changed over recent years, especially the buffering freeboard levels 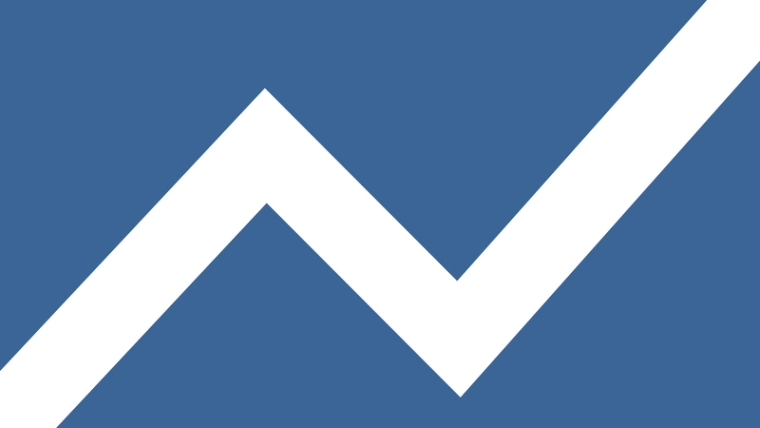 Banks and the Reserve Bank were tussling in 2019 over what is the appropriate level of capital required to make our banking system safe, or in Australian Prudential Regulation Authority (APRA) parlance, "unquestionably safe". That period of 'robust consultation' ended with the December 2019 Capital Review.

The RBNZ had concerns about capital levels and pre-pandemic it moved to require banks to hold more capital.

But it also acquiesced and allowed the transition to the higher capital levels to take rather a long time.

The pandemic has interrupted these plans. But the expectation is that when it passes, we will get back on track. 2022 is the current plan.

Also a very major influence is the Australian regulator, APRA. It has been concerned that higher capital requirements on the Aussie bank subsidiaries here could be at the expense of the home banks (i.e. their banks shift capital support to New Zealand in response to the RBNZ moves). As a consequence APRA has set limits on how Australian banks can support their New Zealand operations. Australia First, basically. And in turn that means Australian regulation covers how ANZ, ASB, BNZ and Westpac operate in New Zealand. These four need to comply in New Zealand with Australian rules, imposing extra-territoriality. Colonial, basically.

So it is appropriate to look at how New Zealand banks are capitalised, and how that capital support has changed over the years.

We built our own leverage monitoring and have run that since 2008.

The core RBNZ capital target is something called Tier 1 Common Equity, often referred to as CET1. Tier 1 equity is core equity, without the hybrids and other 'clever' instruments that are supposed to convert to equity if the bank gets in trouble. APRA tolerates such instruments (Tier 2), but the RBNZ is determined to move away from such 'cleverness'.

The CET1 amount is measured as a ratio to Risk Weighted Assets.

Here is how each bank has moved its CET1/RWA ratio (or CET1%) since the Dashboard data has been available, starting in March 2018, and quarterly since. 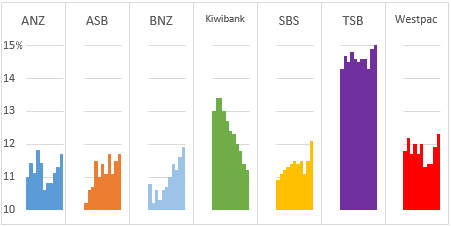 Neither ANZ nor ASB have yet really made any moves to raise their capital support in New Zealand. BNZ has, but that may be less about RBNZ policy than the fact that they were low to start with. Westpac is a lot higher than the other three, however this reflects that they had a capital penalty imposed on them (a "non-standard ratio requirement" of another 2%) for prior infractions, and they have decided to keep the extra levels even though the penalty period has now ended.

Kiwibank is unusual in that it seems more motivated to reduce its capital levels, probably as a way of raising their Return on Equity (ROE), given their profitability has been poor.

TSB stands out with much more capital support.

And here is how much freeboard each bank has, over an above the regulatory minimums. These buffers are an important measure of banking resilience. (Data for this next chart is the C4 Dashboard series.) 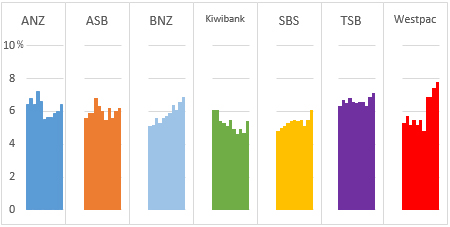 The RBNZ has constraints for this buffering freeboard as well, which restrain bank dividend levels if buffers are not high enough.

In terms of freeboard, almost all banks operate with a ~6% buffer, which seems to have been settled on by bank boards as the appropriate way to respond to regulation.

Unless the RBNZ imposes tougher restrictions, banks themselves can't be relied on to improve resilience on their own. In fact, left to themselves they may in fact reduce the capital supporting their businesses to juice up their ROEs for shareholders. As part of Basel II, the big banks were given self-regulation authority over risk assessment of their mortgage portfolio and they promptly all decided that they needed far less capital supporting home loans. This was an instructive event that showed banks won't set a high-enough bar for safety without active regulation, or in anticipation of a financial shock.

1. Bank deposits are not guaranteed in NZ
2. Term deposit interest rates are pitiful

Any wonder people are opting to buy housing? Maybe if the Government guaranteed the banks and the OCR wasn't so low people might be inclined to leave money in retail banking? I understand total funds with banks is 'up' largely through reduced spending during the COVID-19 period. Wonder how long this will last? Thoughts?

Exactly:
According, to the Reserve Bank, the new capital requirements mean banks will need to contribute $12 of their shareholders' money for every $100 of lending up from $8 now, with depositors and creditors providing the rest.

Does the shift from term deposites to oncall change anything for the banks or RBNZ?

Not really, the mismatch ratios might change but the biggest part of the funding markets are all on - and off balance sheet overnight funding

The big indicator was how many people moved their money out of term deposits, and into almost zero interest current accounts after the lockdown. So some were ready to remove that money out of the bank. The stats appear to show quite a few are putting it into housing, except there is a limited amount of supply of houses to do this. Some maybe putting it into ETFs and stock, or managed funds, or kiwi bonds, gold etc. But when banks aren't even guaranteed in NZ a lot of savers seem to be fed up and are looking at alternative places to earn some interest on their savings. Some may end up getting burnt as a result if the markets crash.

Allowing banks to use a risk weighted asset model is asking for trouble. Do we learn nothing? It quickly became apparent during the GFC that these carefully calculated and so impressive looking models were in effect worthless. Here is short quote from Mervyn King's The End of Alchemy(P258); "The people who designed these risk weights did so after careful thought and an evaluation of past experience. But they simply did not imagine how risky mortgage lending and the sovereign debt of countries such as Greece would become during the crisis, nor how large were the risks inherent in much more complicated financial instruments".

Our banks and in particular our central banks, have no such excuse now.

The King quote is appreciated. It's also a matter of how relevant the weightings are to the wider environment. For example, if we're talking about the mortgage market, the extent to which disruption to business activity negatively affects the quality of the mortgage market is important, but it is also unlikely to be fully understood by the banks. The NZ public and ruling elite are generally apathetic about these considerations and the idea of a 'butterfly flaps its wings' is far from their concern. Greece was like that before it went tits up.

So the two regulators are fighting each other. Haha.
The above graphs are very interesting.
Another factor in all this is ownership of Kiwibank. ie The govt (plus its 2 businesses). A bailout of this bank would be certain if it got into difficulty, so the erosion of its C1 figure makes sense as far as its management is concerned.
Westpac is impressive.

APRA are dreadful anyway. Its people are largely from the banking, finance, and central bank bureaucrat industries and is really little more than a veneer of regulatory authority. The Royal Commission on banking just shows how ineffectual they are. They generally work for the banks' interests.

That picture is a good NZ flag, although the dip is too big . After all rising house prices are what almost all of us care about right?

Well? that's how the FIRE economic works, which part of that 'public secret' we do not know? - Watch this space, due to climate change, coastal erosion, floods, earth quake, carbon neutral promo gizmo, which part of the letter that left from current QE bail out? F.RE The 2021-25 is the year for the 'I' darling - NZ managed it's BTC ponzi frenzy differently, aka 'economic stability/productivity' of keeping the FIRE flame ponzi alive.

I really wonder if Adrian Orr has a good grasp of the major banks financial situation and banking stability with specific reference to an OBR event which comes back mainly to bank capital. Before Covids he was on the right path regarding bank capital but all that's topsy turvy now. Can't rely on Grant Robertson putting his orr in as if any OBR he'll run for cover pointing to the RBNZ's independence and that the RBNZ has control over these matters, not the Minister of Finance.
All major bank CEOs, the Chairman and directors need to reside in NZ and have their passports held. This should emphasise to them how seriously they must take their banks financial position and not rely on an OBR to protect their and he banks positions.