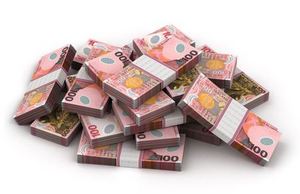 "We'd be looking to raise $25 million this year in equity. We might do that in two hits. Certainly a $25 million cheque we could make instant use of," Roberts told interest.co.nz.

"Our current view is that although we would expect support from our existing shareholders, we're really looking for a new cornerstone investor if we can get one."

Asked whether Harmoney is talking to any such potential investors, Roberts said not that he can share publicly.

"But we are openly looking for capital, absolutely," said Roberts.

Harmoney's major shareholders include the Neil Roberts Trustee Company Ltd with 39.75%, Trade Me with 15.14%, Heartland Bank with 13.34%, and the London-based P2P Global Investments PLC with 7.81%.

"Certainly we think we've proven our model [and] we're growing rapidly. We believe that we would be great custodians of more capital so that we can do more of the same and do it quicker," said Roberts.

He said Harmoney was considering all avenues to capital including perhaps an initial public offering (IPO) at some point, but an IPO "wouldn't appear to be the natural next step."

Harmoney, which Roberts says rejects 57% of loan applications, has facilitated more than $1 billion of unsecured consumer lending, paid about $146 million in interest to investors, and has 110 staff in NZ, Australia and Fiji. For its March 2018 financial year Harmoney lost $1.9 million down from $6.5 million the previous year, and revenue rose to $26.2 million from $14 million. In its first three years of operation Harmoney says it raised $32 million of working capital.

I know where they could get a loan.

Seriously, if they were actually keen on their business model, they'd use it to generate the capital that they need. I haven't see a loan worth investing in on their site in about 3 months. I think they're not actually operating as a p2p lender. They're giving the "institutional investors" (banks) the first bite. This is scummy because their marketing is all about it being p2p, but the reality is that it's just a way for the banks to be even less responsible with their lending practices than they appear to be.

I have to agreed.