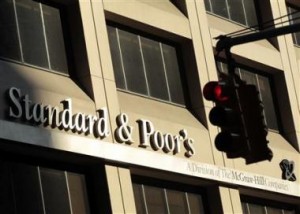 S&P says non-financial corporations in the Eurozone, Britain, United States, China, and Japan need between US$43 trillion and US$46 trillion over the next five years.

This includes US$30 trillion of debt to be refinanced (with three-quarters of this between 2012 and 2016), and US$13 trillion to US$16 trillion of new money (for capital expenditure and working capital) that S&P estimates is required to spur economic growth.

"This global wall of non-financial corporate debt will potentially compound the credit rationing that may occur as banks seek to restructure their balance sheets, and bond and equity investors reassess their risk-return thresholds," said Jayan Dhru, senior managing director of Global Corporate Ratings at Standard & Poor's.

"Combined with the Eurozone crisis, the slow US economic recovery, and the prospect of a slowing economy in China, this raises the downside risk of a perfect storm in global corporate credit markets," Dhru added.

S&P says its working assumption is global banks and debt capital markets will mostly be able to continue providing the majority of the money needed to allow most corporate issuers to "proactively" manage their refinancings. That said, the credit rating agency says a downside risk remains and the balance is very fragile.

"Existing or new sensitivities could flare up and derail our base case," says Dhru.

"Governments and central banks have less fiscal and monetary flexibility to prevent serious problems emanating from future market disturbances. A perfect storm scenario would likely cause financing disruptions even for borrowers that are not highly leveraged."

Talk of a refinancing wall in itself isn't new. A major reason for it is the peak of highly leveraged private equity and infrastructure deals done in 2005, 2006 and 2007. In New Zealand during this period overseas private equity interests paid high prices in debt fuelled deals for the likes of Yellow Pages Group, MediaWorks and Independent Liquor. A significant number of the 2005-2007 global deals have debt refinancing due between 2013 and 2015, PwC partner Paul Skillender points out.

"Added to that during the global financial crisis there was also a series of relatively short-term debt issuances done that also have their maturities in that window," Skillender says." When you look at the level of refinancing, say in the US, of investment grade and non-investment grade debt that's due to fall due, this year there's maybe US$250 billion on public record, whereas for 2013 and 2014 combined there's about US$800 billion."

Skillender says the Asia-Pacific has a "slightly flatter profile" than a lot of other regions.

S&P's comments come in a report entitled: "Is A $46 Trillion Perfect Storm Brewing?." It's the first in an S&P series of articles titled: "The Credit Overhang," commenting on competing forces that might influence corporate credit quality and change "the fragile equilibrium" currently in place in global corporate credit markets.

The credit rating agency's US$30 trillion refinancing figure assumes US$40 trillion worth of bonds, bank loans, and other advances mature on a roughly pro rata basis over an average seven-year period, and that three-quarters of this debt would come due between 2012 and 2016. Of this total, the US, Eurozone and Britain account for about 55%, or US$17.2 trillion, due to mature by the end of 2016.

"While the refinancing requirement for China of US$7.6 trillion over this time period is large relative to its GDP, its state-owned banks, which make up about 75% of China's overall banking sector, are likely to roll over loans extended to state-owned enterprises (SOEs). SOEs contribute about 35% of total annual fixed-asset investments in China," S&P says.

It says a lot will depend on the continued ability of banking system regulators to "pilot a path through the minefield that lies ahead."

"Governments and central banks globally have utilised many financial tools in their arsenals to stabilise the financial system and strengthen bank balance sheets. In conjunction with the global financial markets showing signs of stability, monetary and fiscal policies quickly shifted to focusing on restoring economic stability and growth. However, this highly accommodative monetary policy, centred on expanding the monetary base and maintaining artificially low interest rates, is likely to produce only a fragile recovery at best, and could easily be thrown off course at any moment," S&P adds.

"Key risks that could challenge the policy consensus include a backlash to the austerity measures introduced in debtor countries in Europe, escalating oil and commodity prices (possibly triggered by further geopolitical unrest in the Middle East), and a potential material slowdown of growth in China."

Not surprisingly S&P points to Europe as a particular area to watch, wth the region's banks experiencing funding pressures and remaining capital constrained.

"The effect may be exacerbated for existing borrowers where credit quality is weak (including many smaller 2006-2008 vintage leveraged buyouts in Europe) and, in certain cases, where corporate loans reside in securitisation structures and the borrowers are unable to roll the exposures forward given structural reinvestment and maturity constraints." 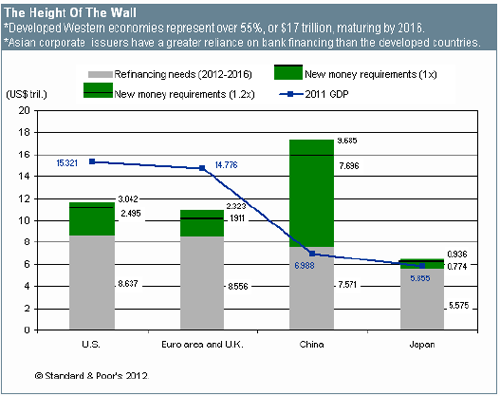