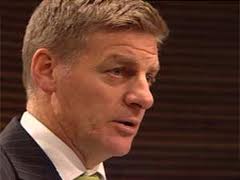 And it seems like that demand will stick around, he says.

The visit was part of a wider trip overseas which included a meeting of APEC finance ministers in Moscow, and a meeting with credit ratings agencies in New York.

“The Debt Management Office view is that a number of those Asian central banks are supporting our bond market," he said.

“While the market’s going through this risk on-risk off cycle pretty frequently, the central banks take a long time to decide whether to buy; Then you get the sense that they’ll stick around."

English said that part of the overview he presented was that government debt here would stop rising in the next two to three years, which would change the nature of the NZ government debt market.

You can follow NZ government bond yields in our Bonds section here.

Bill thinks they will stick around...right up to the time when they ask for political support from a NZ govt over this or that bunch of islands..what will you do then Bill?