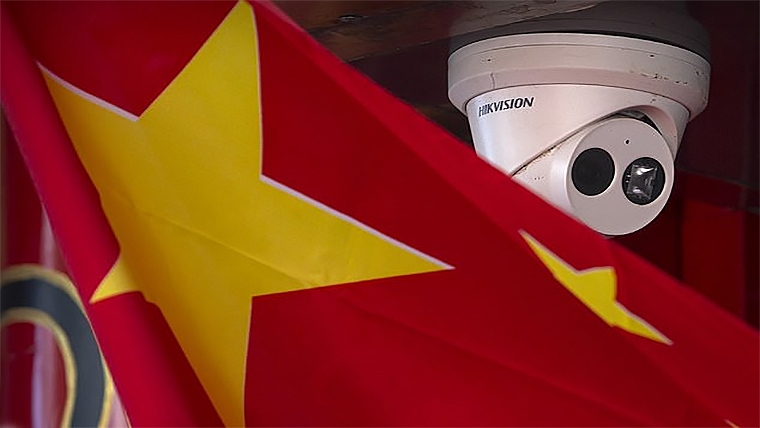 The following was published by ANZ as part of its Blue Lens series (link not available). It is here with permission.

China appears to have changed tack on the technology sector. ‘Barbaric growth’ is giving way to something more sober, considered and cognisant of the risks.

This shift in approach has much in common with other economies, and reflects a range of factors including concerns about monopoly power and data security.

This policy shift appears to be structural, and the macroeconomic implications are substantial.

The tech sector has been one of the bright spots of growth in China for the past five years, accounting for nearly 1 percentage point of GDP growth in 2018.

While a slowdown shouldn’t be a surprise, the vigour of the shift in policy targeting the tech sector is worth paying attention to. 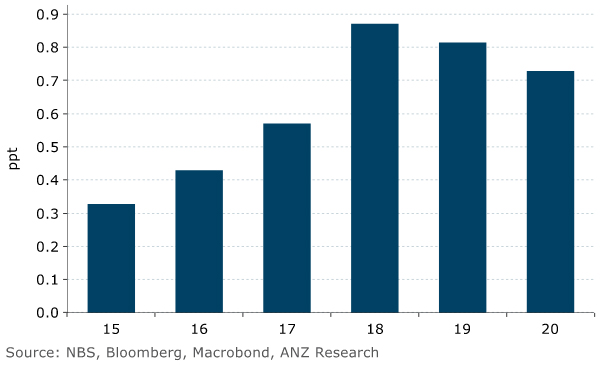 If tech is unable to sustain China’s high rate of growth, the focus will shift back to manufacturing and consumption. But both are facing structural challenges of their own.

The 14th Five-Year Plan has an objective to “maintain the manufacturing share in GDP stable”. This would be a material improvement from recent decades which has seen China’s manufacturing sector consistently declining as a share of GDP.

But China’s climate commitments are a new, and very substantial, constraint on the manufacturing sector.

A BIS study maps data from 121 countries between 1971 and 2016 and finds carbon emissions rise with economic development, manufacturing activity and urbanisation. All three have been part of China’s enviable economic performance over recent decades.

In March, the five-year plan called for China to reduce energy intensity by 13.5% by 2025.

The establishment of a research centre on Xi Jinping’s Thoughts on Ecological Civilisation under the auspices of the Ministry of Ecology and Environment suggests a commitment at the most senior levels.

While countries have decoupled carbon emissions from GDP growth, almost all were growing slowly.

Moreover, decoupling emissions and GDP on a single-country basis is easier than all countries reducing emissions together. A single country can ‘outsource’ its climate-unfriendly production to jurisdictions with weaker environmental standards.

OECD countries as a group are net importers of carbon, relative to what is produced domestically.

One study of nearly 2000 multinational firms headquartered in 48 countries found firms’ emission levels are significantly higher abroad if environmental regulation is more stringent at home. China itself may well have been the recipient of such production in the past.

China’s climate commitments are a major new constraint on the growth of the industrial sector.

The household sector has long been proffered as the source of future growth. Households can contribute through lower savings and or if aggregate household income rises.

The savings rate has fallen from 52% of GDP in 2008 to 44%. This decline corresponded with a period when China’s rate of growth more than halved, showing even a falling saving rate won’t insulate China from its structural headwinds.

Further declines in the saving rate may be possible, but structural constraints suggest these will be modest.

Supporting us gets rid of ads. Find out more.

With the one-child policy in place between 1979 and 2015, many retirees will need to fund their own retirement rather than relying on their children to provide both care and financial support.

China’s working age population is already shrinking and some studies suggest the population will peak by 2025 at the latest, well ahead of previous expectations.

One solution to both aging and the paucity of official retirement support is to raise China’s retirement ages. At 60 for men, 55 for female government workers, and 50 for other females, these are currently low.

But as Michael Pettis points out, China’s unique demographic and social structures mean older people are an important source of social support. If they spend more time at work, it will act as an even greater demographic disincentive for young families.

Perhaps reflecting these structural constraints, the Ministry of Commerce’s recently published Five-Year Plan for Commerce Development contains projections for retail sales only growing at 5% annually for the next five years, down from 10%in the last five-year plan.

The IMF puts China’s augmented public debt at 96% of GDP, and on track to eclipse100% of GDP by 2025. In common with many countries, China’s fiscal capacity is limited.

China’s monetary policy easing has been very substantial during the pandemic. BIS data show non-financial debt rising from 263% of GDP at the end of 2019 to 290% of GDP by the first quarter of 2021.

This is lower than advanced economies, but it is very high for an emerging economy, and has been a policy target for some years.

This structural concern about the build-up of debt is one reason China shifted towards a more prudent monetary policy stance in the third quarter of 2020.

But China’s recovery hasn’t been as vigorous as hoped, and the result has been a step towards renewed easing through a reduction in bank reserve requirement ratios.

While China will continue to grow more quickly than many other countries, risk-driven constraints on the tech sector, demographic constraints on consumption, climate constraints on manufacturing, and macro constraints on monetary and fiscal policy suggest the economy is facing another downshift to a slower growth path.

Richard Yetsenga is the chief economist at ANZ and is based in Melbourne.

China's actions have put paid to the internationalization of the yuan and its integration into capital markets. The yuan will not be replacing the dollar as a reserve currency anytime soon!

China's leaders are far more realistic than our own. They don't believe the fantasy that you can have it all -- endless economic growth, and environmental sustainability, and a satisfied middle class, and political stability. They can, perhaps, see that a society entirely mediated by private tech monopolies is an existential threat; and they're more right about that than the West is willing to accept. I am terrified of Xi's authoritarian, surveillance state; yet if you asked me who I would choose to be World President, in the terrible event that my only choice was between Mark Zuckerberg and Xi Jinping? Well...

Over 100 years ago the USA forced Standard Oil to split. It did the same to ITT. They realised capitalism only works when there is competition. We need something similar with Facebook, Amazon, Google, Microsoft. The Chinese govt may be doing good by stopping their tech giants getting too big. Maybe they noticed who decided whether Trump could use various social media accounts. Pres Xi is only a more ruthless, more intelligent and more subtle version of Pres Trump.

"Pres Xi is only a more ruthless, more intelligent and more subtle version of Pres Trump."
So is my cat.

That said agree with you about breakup of these monopoly giants..Biden wont touch them.

The Radically Not Inflationary ‘Shock’ Of Chinese Cracking Down

The direction China’s Communist government under Xi continues to take should not have been a surprise to anyone. Unfortunately, most people aren’t aware of why that is. And the government’s rising interest over the overall flow of information given what’s been transpiring over there, this just goes without saying starting from a more realistic premise as to the real state of the Chinese State.