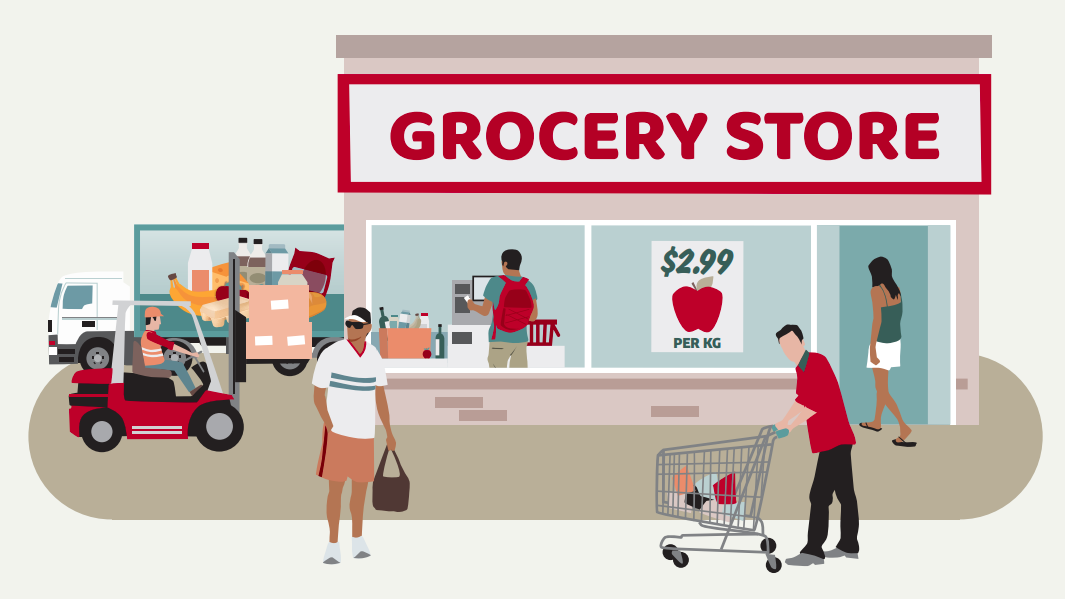 In what they term "an unlikely pairing",  Consumer NZ and The NZ Food & Grocery Council have published a joint open letter to parliament calling for a shake-up of the supermarket industry.

The move follows recent publication of the Commerce Commission's draft report looking at the retail grocery sector, which found that competition in the supermarket sector is "not working well for consumers" and it's difficult to see the situation improving without "some form of intervention".

Speaking of the tie-up with the NZ Food & Grocery Council, Consumer NZ chief executive Jon Duffy said: "We are not always allies, but we both agree the concentration of market power in our supermarket sector is producing poor outcomes and putting strain on New Zealand households. Both consumers and suppliers are being held to ransom by the duopoly of Foodstuffs and Woolworths NZ.”

Analysis of Stats NZ data show the cost of an average shop for a typical household equates to 15-20% of income for median or lower income earners, Duffy said.

“The general consensus is that grocery expenditure should sit between 5-15% of total household income. What we're hearing from many New Zealanders is that they're having to spend too much of their weekly pay packet to keep themselves fed. Whatever way you slice it, the cost of groceries keeps going up and the duopoly’s profits are persistently high. Each year households are getting squeezed further,” he said.

Consumer NZ’s Sentiment Tracker found concerns about the cost of food and groceries have climbed in the past few months with grocery cost concerns ahead of those about fuel, healthcare, energy, insurance and phone bills. Concerns about food prices come in second to rent and mortgage costs.

"...But the duopoly are bullying suppliers, even large ones, and consumers are worse off in terms of price paid at the checkout, choice and innovation. With the lack of any real competition between the two supermarket chains, they’ve been able to maintain staggering profit margins which are not enjoyed anywhere else in the world,”

Consumer NZ and the Food & Grocery Council are calling for the following changes to benefit consumers and suppliers:

The general consensus is that grocery expenditure should sit between 5-15% of total household income.

Is that 5--15% after or before you buy the chips chocolate and other rubbish.

lol, a kilo of frozen potato chips is cheaper than a kilo of potato.

Vegetables were up something like 19% in the inflation figures put out a couple days ago.

Well past time for a third or fourth player to come in, even if the government sponsors them (like the film industry) with some serious subsidies as the set up cost for them is huge. We need a Costco or Lidl or both.  Long term, would be much better for NZ consumers...

More blah blah blah it will never happen just more talk how often have governments of both left and right promised change in this market as well as housing etc the consumer just keeps on getting screwed.

NZ is fundamentally  a non-competitive market though. Add in a fourth player, and they will just price the same as the existing ones.

Not sure, why but it is clearly endemic in our business structure. I mean look at what we actually produce as a nation, it is those things that tend to be the most overpriced of all (Dairy, Seafood, meat, Fruit, and Veges).

Yawn as it like we we going to take a closer look at the price of petrol in New Zealand over a year ago and what happened to that ? Labour supporters have the memory of a Goldfish, all they need to say is that the reports due out in 6 months time and by then everyone has forgotten about it. In the meantime the price of petrol hits $3 a litre in Auckland for 98 at Christmas and............crickets.

I'd like to see distribution and retailing seperated, verticle integration hurts competitiveness.

You are not ruled by poor people. They will not care for the plight of the poor when the cameras turn away.

Limit each group to say 50 outlets max.  Yes, Fifty only.  The industry can decide how they break up.

Then with multiple groups suppliers and consumers get a choice and competition for their business.

The big size currently does not produce efficiency.  They make money by having control.  Free enterprise is not what they want.

Will be interesting whether all this has the desired outcomes...if supermarkets are making too much net profit, by how much? 1%, 2%, 5%?

So presumably if their profits were to drop then price of goods will drop correspondingly. Then these 'bullied' suppliers will no doubt be looking for some more profit themselves, so will in-store prices drop much, if at all?

Although we have CD and FS kind of as a duopoly,  PNS and NW are really in competition- you can be sure your local PNS is trying just as hard to take market share from NW as it is from CD.

Figures like 5-15% of household income are practically meaningless - let's say supermarkets are making 10%NP (I don't know what it is), then if they dropped prices by 10% they make 0% NP - hardly sustainable huh?

Code of conduct may be ok, but it could potentially effectively reduce competition by making existing suppliers more entrenched, making it harder for newbies to compete .

As a "bullied supplier"  we get $7-8/kg meat (bone in).  So a 29kg lamb is $160 to the farmer.  Processing is another $12-15 plus they keep all the by-products.  A lamb is basically 2 hind leg roasts and chops.  This all retails for $17-30/kg.  For the sake of this exercise call it $20.  The retail value is north of $400.  There is plenty of fat in wholesale and retail margins without affecting farmer prices not discounting the undoubted skills required to bring the product to market. .

Kiwibank should setup a side hussle and invest all profits and get a lump sum from government to compete headon under a co op sheme with kiwi growers and producers as well to level the playing field and allow suppliers an outlet that they may have some input into rather than being told take this it take or leave.

kiwimarket.co.nz has a nice ring to it but someone has already secured that website.

Nothing is going to change.

It's getting amusing that with interest rates rising, not much dampening is happening in the real estate; instead food prices are getting even dearer.

Not much dampening is happening in the real estate YET.