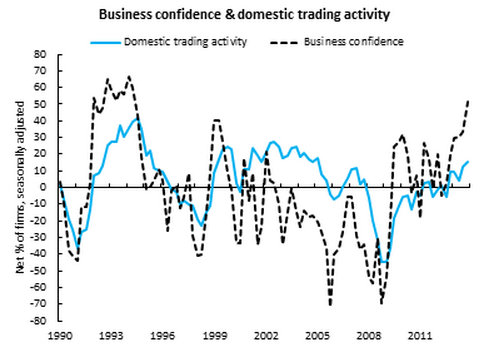 The New Zealand Institute of Economic Research (NZIER) has reported from its Quarterly Survey of Business Opinion (QSBO) that businesses were the most confident about the economy since June 1994 in the December quarter of 2013.

NZIER Principal Economist Shamubeel Eaqub said the economic recovery was broadening across the regions from Canterbury and becoming self-sustaining.

The survey found exerienced inflation pressures remained subdued, but that a net 24% expected to increase their prices in the next quarter, unchanged from the previous quarter. A net 70% expected interest rates to rise, up from a net 30% in June.

Eaqub said reported hiring rose to its highest level since December 2006 and a net 12% expected to hire more in the next quarter, although this was down from a net 16% in the September quarter. "Labour is gradually becoming harder to find, suggesting that wage inflation will increase over the year ahead," Eaqub said.

"2014 has a better outlook for households in particular as wages start to rise," he said.

Eaqub said the survey did not, however, contain a 'smoking gun' to argue for an early hike in the Official Cash Rate. He said the Reserve Bank was more likely to wait until the March quarter Monetary Policy Statement (MPS) before increasing the OCR from its current record low 2.5%. The Reserve Bank's December quarter MPS also suggested a March start to rate hikes.

Other highlights from the QSBO included:

The September quarter's surprise slump in building investment intentions was confirmed in the December quarter, which NZIER said suggested the Canterbury rebuild was at its 'peak' pace. "This could suggest that the pace of growth, but not the level of activity, has peaked," NZIER said.

The QSBO's measure of capacity utilisation actually fell in the December quarter to 90.2% from 91%, despite those citing capacity as a constraint rising to a net 12.7% from 10.8% and being above the long run average of 8%.

NZIER said the lack of spare capacity was becoming most acute in Canterbury and was elevated for exporters, although was less constrained for domestic businesses.

The survey showed a net 7% employed extra workers in the December quarter, up from a net 1% in the previous quarter. However it remained below the previous quarter's expectations that a net 17% would employ extra staff. The survey also found the ease of finding skilled labour worsened to a net negative 30% from a net negative 29%, with the percentage reporting it difficult to find unskilled labour rising to a negative 10% from a negative 5%.

"Difficulties finding labour typically take up to a year to push up wages -- this suggest wage growth will quicken in 2014."

Westpac Senior Economist Michael Gordon said the economy was picking up faster than the Reserve Bank assumed, but inflation pressures remained in check, meaning the bank could afford to wait until March before hiking.

"Inflation pressures have remained in check, and while they are likely to build over time, the RBNZ doesn't seem at great risk of falling behind the curve. Our view remains that the RBNZ will begin raising the OCR in March (using its next review on 30 January to signal such a move), with five 25bp hikes over the course of this year," Gordon said.

ASB Economist Christina Leung said there was little in the QSBO to suggest a smoking gun for the RBNZ to hike in January, although capacity as a constraint continued to trend up, led by Canterbury.

"The key concern for the RBNZ would be the extent to which this flows through to widespread inflation pressures. We do not see anything in today’s QSBO which would trigger the RBNZ to lift the OCR in the January meeting. While the RBNZ is more confident of the broadening in the NZ economic growth, the contained inflation environment means we expect they will wait until the March MPS to lift the OCR," Leung said.

but hold on a minute-  PDKs teachings say its all down hill for our unsustainable way of life, and eroi and malthus bro are the way ahead(not)

This is a great presentation by Associate Prof Krumdieck (Mechanical Engineering - Interest in energy) from Canterbury University NZ which covers most of the stuff you just mention (must be another multhus bro!!!). In this video she ends up 'telling it like it is' to the business leaders in a rather blunt way by the end of her presentation. I like her honesty.

Most 'business' types could learn a lot from it. Magical thinking appears to run rampant in this type. As for you, you probably won't watch it. Meh.

Has the last 5 years shown that wage/salary earners with a decent mortgage actually benefit from a recession & disaster/s as it means their mortgage interest rates are far cheaper?  (As long as they keep their job).
Now as our "Rock Star" economy emerges in 2014 -this may mean penalties on the kiwi battler with a family & home as his/her mortgage rises. Also increased borrowing costs for the small business owner.
So who will be benefiting form our Rock Star economy this year?

Very few MortgageBelt. Just that no one realises it yet. Why do economists talk of labour constraints and subsequent wage increases but a recent forecast put wage inflation at 1%pa? Many contradictions, few answers.

The majority will benefit Mike, remember that business confidence might be at 20yr highs but consumer confidence is likewise at 9yr highs (i.e. those lowly paid NZers)....people are doing better. Yes interest rates will rise modestly this year (but many have already fixed unless they've listended to a couple of here) and the currency will probably rise somewhat, but that is the price you have to pay if you likewise expect interest and exchange rates to fall when there is a crisis in your economy as per 2008/09.
For those that are negative about all the positives (yes I know, sounds strange, but they are) they should try seeing how positive they would be living in most other OECD countries on average currently. Some people are just never going to be happy no matter what.

If interest rates move 125bps this year as Westpac and BNZ (not sure what ANZs take is) are predicting and we see a big upswing in the USD,the net benefit to those with high debt will surely be negative.Many who have hedged their rates are at the short end. Those with low or no debt will do better.

Interesting that ASB are forecasting 75bps this year, a 50 point spread compared to those above. Their OCR peak is also 100bps below the other forecasts. They've given a more realistic forecast,in my opinion, and perhaps taken more account of NZs economic structure.

Agreed, and I think those interest rate forecasts feel about right barring some offshore disaster. But those rises are already priced into fixed rates which went well higher over 2013 in anticipation, and the exchange rate equally has that rise and economic performance mostly priced in as well I suspect, although probably not completely in both cases. Anyone who bought a house that can't afford a 7.5% - 8.0% mortgage rate over the cycle shouldn't have bought one in the first place, and lets face if youre in a tight spot, you can currently still fix for 5yrs at close to 7% - unfortunately the wishful thinkers with no understanding of basis risk management say the opposite, that they can't afford to fix, the thinking that results in mortgagee sales. I feel for the young in that position who understandably got frustrated waiting for an affordable home, and only eventually bought because of the 5.00 - 5.50% floating rates at the low point of the cycle.
I repeat that you can't expect loose monetary conditions when things are bad, and not somewhat tighter when things are improving, and for those that haven't anticpated that, the upside for them will likely be zero or negative.

We are the most confident in a decade ...... Wow .....this is something .
So whats the reason ,I mean the the real reaons{s}  for this turn around of our fortunes?
Is it because we produce and export  food and given that everyone must eat , we are always going to be the lucky country ?
or
Is it because we have had an extremely flexible economy and flexible markets ( including the financial and labour markets) that has seen us through the GFC ?
or
Is it becasue we have a competent Reserve Bank who have seen us through the GFC storm
or
Is it because John Key left the markets to do what they are meant to in a recession , and get rid of the weak , sort out the misallocation of Capital and generally get us out of the complacency we had become accustomed
or
ARE WE KIDDING OURSELVES ?

There's definitely been a fuil-on NZ-economy-to-boom-in-2014!!! propaganda campaign running for the past couple of weeks, but the missing factor is what the hell is supposed to be driving it other than some kind of nebulous magic milk powder fairy dust.

Or maybe we have a unique relationship with a booming global powerhouse.

"what the hell is supposed to be driving it"...

try dairy, forestry, refined food products, tourism and most recently IT products and services.  Only the weak, stupid and lazy cannot succeed in this climate.

Just been looking on Trade Me at Businesses for Sale. I can't believe how many motels/hotels/cafes/backpackers accomodation andbakeries are for sale.This does not signal confidence to me .It appears everyones either wants out or wants to move up to the next level.I,in my humble and uneducated opinion would suggest the former is the more likely.

There will be an element (maybe more than a bit) of a backlog of these things for sale, as they haven't been selling. They are not the easiest things to sell at the best of times and we haven't had that for some time, I guess the owners of them see a shot now that things look like up. Too bad that for some, the bottom looks like up.
Hard things to make money out of these days, so many of them around

Mate , tourism seems to be battling , the Kiwi$ is possibly too strong?
Had family here from overseas recently and they were horrified at the cost of accomodation and even the price a cup of coffee....... same price as in London where the wages and rents are 3X higher on a purchasing power basis.
We lent them the campervan and  told them to make coffee from a thermos flask
The headlines are a bit deceptive .
There are sectors that are going gangbusters , but some sectors are not doing well .