South Island listed companies work hard under adverse conditions to achieve a +1.1% increase in the quarter to 30 June 2015 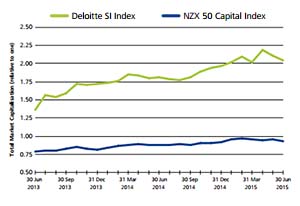 This quarter showed the resilience of the 31 companies on the Deloitte South Island Index with only a handful of substantial decreases recorded against a backdrop of unfavourable economic circumstances.

The Deloitte South Island Index, which tracks the quarterly performance of listed companies with operations in the South Island, ended the quarter at its highest quarterly point since its inception in 2007, gaining $159.2 million (1.1%). This was due to several stand out performances and general resilience amongst the companies listed that minimised potentially large decreases.

The Index’s slight increase was, surprisingly for a minor gain, the outstanding performance compared to the other indices tracked.  Over the same period, the Dow Jones experienced a 0.9% decline, the NZX 50 Capital Index dropped by 2.7% and the ASX All Ords was the worst performer shrinking 7.0%.

Scott McClay, a corporate finance partner in Deloitte’s Christchurch office, says that it is not the first time the Index has bucked the trend.

“Since the inception of the Deloitte South Island Index, there have been many periods where it significantly outperformed the other major indices we track, including during the aftermath of the global financial crises,” says Mr McClay.

“This performance is supported by the mix of traditional, innovative and large mainstream companies that are represented on the Index and call the mainland home.”

Only three of the seven industry sectors posted positive movements in the quarter to 30 June 2015 – Energy & Mining, Property, and Retail.

Meridian Energy and Ryman Healthcare drove the results of the Energy & Mining and Property sectors respectively, while the Retail sector benefited from Kathmandu Holdings’ performance.

After experiencing declines in the previous four quarters, Kathmandu Holdings gained $74.6 million (26.8%).  This is positive news in an environment where retailers are struggling, and is attributable to the announcement of Briscoe Group’s statement of intent to lodge a takeover notice for Kathmandu Holdings.  However, Kathmandu was already on track to make a small gain for the quarter before this announcement.

Synlait Milk lost $77.5 million (18.0%) over the quarter as the market reacted to the ongoing drop in the global milk price and the difficult season experienced by its suppliers.

The Biotechnology sector suffered the largest decline of the quarter and shrank by 19.0%.  The decline was led by Pacific Edge whose market capitalisation declined by 22.1%. These numbers don’t yet reflect an uplift in their commercial revenue as they roll out their USA sales and marketing strategy.

Heartland New Zealand experienced a decline after positive results in the previous quarter and decreased by $47.9 million (8.0%). However, in a June 2015 announcement Heartland confirmed that it expects net profit after tax for the year ended 30 June 2015 to be at the upper end of their previously forecasted range of $46-$48 million.

“The past three months have been tough for the companies on the Deloitte South Island Index, but the data reflects an underlying level of resilience. Many of these companies will be looking forward to the fall in New Zealand dollar over the past quarter flowing through to their businesses,” says Mr McClay.