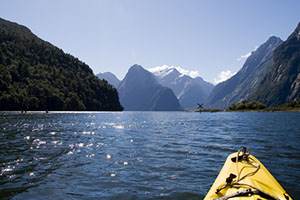 By Zoe Wallis and Jeremy Couchman*

As the New Zealand economy has slowed through 2015 in the face of weaker global growth, lower prices for its key export commodities, and a waning growth contribution from the Canterbury rebuild, tourism is one sector that has bucked the trend.

In comparison to some other sectors of the economy (e.g. dairy), tourism has continued to go from strength-tostrength and is expected to provide support to NZ’s economic growth in the future.

This note discusses recent developments in the tourism sector, the types of businesses that are benefiting, and suggests that the current period of expansion is set to continue.

The direct contribution to economic activity from tourism has increased by 10.4% over the year to March 2015 to $10.6bn or 4.9% of total GDP.1 Over the past couple of decades tourism has been NZ’s dominant export earner, only recently being overtaken by dairy. Dairy overtook tourism as a result of hefty dairy price and production increases following rising demand for dairy products from emerging markets – in particular China.

However, tourism looks set to regain its position as NZ’s number one export earner in coming years (Figure 1). 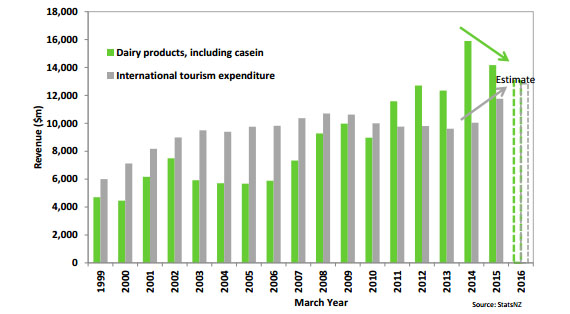 Tourism’s expected ascent back to NZ’s top export earner is in part due to a reversal in fortunes of the dairy sector. Nevertheless, various factors have combined to support international demand for NZ tourism services including: a lower exchange rate, ongoing recovery in tourist numbers from existing tourism markets, and a rapid increase in demand from emerging markets such as China.

A lower exchange rate is one factor supporting tourism spend

The fall in the NZ dollar earlier this year is likely to have been one factor behind a rise in spending by international tourists. Against the US dollar, the kiwi declined 17.5% (from US$0.77 to US$0.63) between April and September. On a trade-weighted basis we have seen the currency depreciate by as much as 15% since April.

Theoretically, the currency can influence tourism expenditure in two ways. A lower NZD increases price competitiveness of a holiday to NZ and therefore can encourage more visitors to our shores. Secondly, a lower currency means tourists have stronger purchasing power in NZ and therefore tend to spend more once here. Actual evidence of the currency’s impact on international tourism is less clear cut, and tends to vary among tourist markets. Simple correlations of exchange rates versus spend per visitor, and exchange rate movements versus visitor numbers, are presented in Table 1 below.

Australian tourists are much less influenced by exchange rate movements compared to other markets, possibly due to shorter average trips and a larger proportion visiting friends and family. Tourists from further afield, such as the US, Japan, and to a lesser extent the UK, seem less swayed by the currency when booking vacations to NZ, but tend to adjust spending in response to currency movements once here.

Another key factor driving tourism’s current resurgence is a strong pick up in the number of short-term visitor arrivals from China.

Since early 2013 the number of tourist arrivals has accelerated. In the year to October 2015 over 3mn short-term visitors entered the country, an increase of 240,000 compared to the same period last year. Australia is our largest source of tourists, which is unsurprising given its close proximity and ties with New Zealand. However, we have recently seen rapid growth in visitor arrivals from Asian markets (Figure 2), in particular from China.

Changes to visa rules, a growing middle class with an increased appetite for international travel, and an expansion in airline capacity have all played a part in the rise of Chinese tourist numbers. 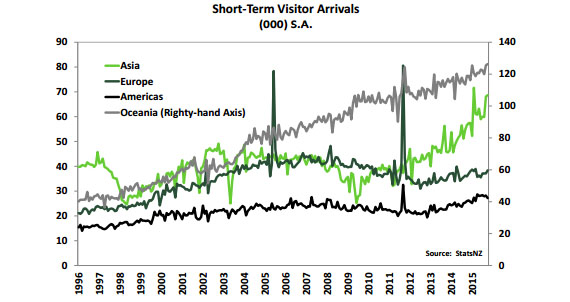 …in part due to higher average tourist spend

In addition to a rising number of visitors, Asian tourists tend to spend more on average per night than tourists from other markets. Data from the Ministry of Business, Innovation and Employment’s (MBIE) international visitor survey, shows that both Chinese and Korean tourists spend the most per night than any other market (Figure 3).

At present, the high average spend is due to a large proportion of tourists from these countries undertaking group tours that include spending-orientated activities and the inclusion of high-end accommodation. 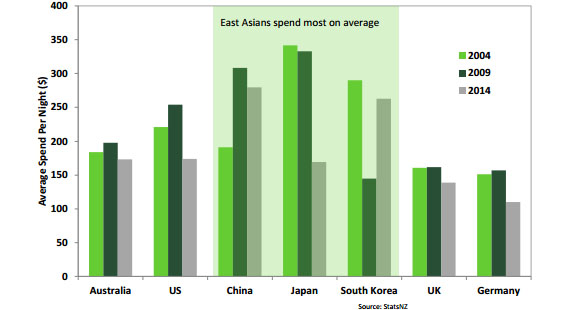 Official forecasts produced by MBIE project average tourist spend per night to fall among Chinese tourists over the next five years, due to an increase in the number of independent travellers. These travellers tend to choose a wider array of activities and accommodation choices, which are typically at a lower cost compared to group tour options.

However, independent travellers also tend to stay longer resulting in an expected lift in overall spend per visit. MBIE is forecasting a rise in the average length of stay for Chinese tourists to 28 days by 2021, from around 18 days currently. By contrast, the average length of stay for other main tourism markets is expected to remain relatively static. The regions are also set to benefit as independent Chinese travellers tend to explore more of a country during their time here.

While the boost provided to the NZ economy from tourism is welcome at a time when other sectors are facing challenges, the same markets that are the driving force behind recent increase in tourist numbers can also be the most fickle. Compared to NZ’s largest source of arrivals (Oceania), arrivals from Asia (particularly East-Asia excluding Japan) have swung dramatically in response to major localised and global events (Figure 4). Following the Asian economic crisis of the late 1990s, arrivals from Asia contracted sharply, falling by around 40%, with a sharp decline in visitors from South Korea, Japan, Hong Kong and China. Again following the global financial crisis (GFC), Asian visitor arrivals pulled back at a similar rate and this time China played a larger role. Public health scares, such as the SARS epidemic in 2003, led to travel bans and a lower propensity for people to travel.

Japanese tourist arrivals have fallen dramatically since the mid- 2000s in response to a slowing economy, the Canterbury earthquakes of 2010 and 2011, and Tourism NZ’s promotional activity switching focus to markets such as China, the US and Australia. 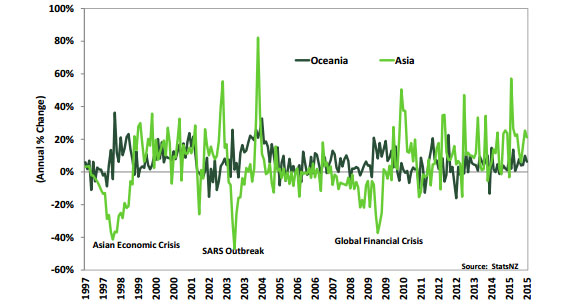 Concerns around global economic growth have mounted through 2015 as China experiences a slowdown in economic activity. As export demand for Chinese goods has fallen, authorities are trying to transition the economy from investment and export-oriented growth, to more consumption-led growth. Chinese authorities remain willing to support economic growth to meet official targets (currently annual growth of 7%), but there are risks that China enters a sustained period of substantially weaker growth. As Asian markets make up a larger share of NZ’s tourism sector, tourist numbers could be hit hard if a severe economic event occurs.

Locals are also providing a lift to tourism

While most of tourism’s focus tends to be on international markets, domestic tourism accounts for almost two-thirds of all tourism demand in NZ. Domestic tourism has also experienced a surge in activity. Domestic tourism expenditure increased 6.9% in the March 2015 year, and has grown by almost 20% since we emerged from the GFC. The latest figures are likely to have been supported by the cricket world cup that NZ cohosted with Australia – particularly the domestic market. Nevertheless, indicators such as monthly visitor arrivals and guest nights suggest that tourism activity has kicked on following the tournament.

Tourism related expenditure increased across all goods and services categories in the year to March 2015, with retail and hospitality businesses experiencing a strong pickup in sales. Unsurprisingly, the types of businesses that have seen significant increases in sales activity in the year to March 2015 are those most closely associated with tourism. For example, total expenditure on both accommodation and transport services grew 7.5%.

Tourists (both domestic and international) splashed out on retail therapy over the period.

In addition to providing a significant boost to the retail sector, tourism is a significant domestic employer. In the March 2015 year 170,000 people were directly employed by tourism-related businesses – equivalent to around 7% of all employment. Activity generated by the sector also indirectly supported an additional 130,000 jobs.

The boost in tourism activity is believed to be the start of a broader trend. Official forecasts from MBIE estimate that total visitor expenditure will reach $11.1 bln by 2021, a 48% increase from 2014.

Despite annual Chinese economic growth slowing to around 7%, China has a large and growing middle class that has consumption patterns converging to those of developed economies – including a propensity for international travel.

The global management consultancy firm McKinsey and Company,2 reckons that mainstream consumers will make up over 50% of all urban households in China by 2022, up from 14% in 2012 (i.e. consumers earning between US$15,700 to US$34,000 per annum). This equates to a tenfold increase in the number of Chinese middle class to around 470mn by 2022. Even a smaller rate of increase in Chinese middle income equates to a significant opportunity for the NZ tourism market. 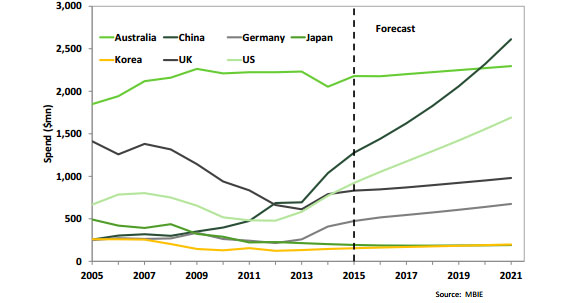 Against a backdrop of a slowing NZ economy, tourism has stood out as one of the strongest performing sectors in 2015. A rapid rise in the number of Chinese tourists, who have the highest average daily spend, is providing a boost to international tourism activity.

Changes to visa rules, a growing middle class with an increased appetite for international travel, and an expansion in airline capacity have all played a part. Recent concerns regarding weaker emerging market growth highlight risks to the tourism sector as these economies make up a larger share of the industry.

Tourist arrival numbers from East-Asian countries have swung dramatically in the past following major localised and global events such as the Global Financial Crisis. In addition, recent terrorist-related events could lead to increased caution around international travel.

Nevertheless, with a large and growing middle-class in China that have consumption patterns converging with those of developed economies, the future of NZ tourism looks bright.

Zoe Wallis and Jeremy Couchman are economists at Kiwibank. This report is reproduced here with permission.

A few years ago the tourism industry was in the doldrums with complaints to the the Minister of Tourism on the rise. Good to see an improvement in recent times but it appears to have relatively little impact on the Balance of payments as often tourists buy what they know and their expenditure is often concentrated on international products rather than NZ added value.

most of the trinkets we sell to tourists are imported. its a shame we only have a few manufactories in this space. As for people working in this industry most are either students or on a working holiday visa, but then we have to make it cost effective to come as we are a long expensive flight for many