Koichi Hamada likens government borrowing, especially for QE, to a ponzi scheme, something only illegal in the private sector

Koichi Hamada likens government borrowing, especially for QE, to a ponzi scheme, something only illegal in the private sector
23rd Jun 16, 9:02am
by Guest 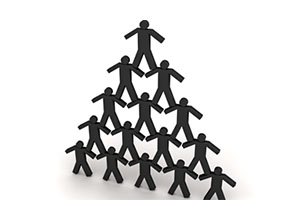 In the early years of the twentieth century, Charles Ponzi, an Italian migrant to North America, had a seemingly brilliant moneymaking idea. He would offer huge returns on worthless investments, thereby convincing a growing number of people to give him their money, which was used, in lieu of profit, to pay off earlier investors. Ponzi’s eponymous scheme was essentially a way to enable businesses to rack up debt forever. But, of course, it was ultimately just a scam – and, indeed, it landed Ponzi in prison.

A century later, pyramid schemes like Ponzi’s are still regarded as fraud, at least when they are pursued by private businesses. Yet few seem to recognize the role such schemes play in the public sector. In fact, governments in many countries, including the United States and Japan, survive on what are essentially Ponzi schemes.

Of course, there are crucial differences. A traditional private-sector Ponzi scheme, despite its potential short-run returns, always breaks down for a simple reason: the number of potential investors is finite. But in a government-run Ponzi scheme, the investor is the taxpayer. And a stable government, with all the coercive means at its disposal, can reasonably expect to continue collecting taxes, which it can use to repay its earlier debts, for generations to come.

But the fact that a public-sector Ponzi scheme can be sustained for a longer time does not make it foolproof. Excessive public debt weighs down an economy, leaving it vulnerable to shocks. Given this, many analysts have called for aligning the rules for public debt more closely with those governing the private sector. Yet it is important to take a nuanced approach.

That is not what has happened in the US, where Republican Party leaders decided that curtailing debt accumulation was the top priority. By blocking the passage of budgets, Republican lawmakers caused brief shutdowns of the federal government – an approach that succeeded only in spooking markets. If anything, the party’s embrace of such a radical stance contributed to the emergence of Donald Trump – the erratic and recalcitrant “billionaire” who claims that he can convince creditors to accept haircuts on America’s debt – as a contender for the US presidency.

Just as a fast-moving cyclist cannot simply stop pedaling, governments cannot suddenly halt all borrowing. To remain upright and in control, they must eliminate their deficits gradually.

That is a lesson that Japan has taken to heart. With net debt of around 130% of GDP – much higher than in other advanced economies – the country is currently forced to allocate a large share of government expenditure toward servicing its liabilities. While very low (sometimes even negative) interest rates helped to limit that share to 22% of the total budget during the last fiscal year, a rate increase would force taxpayers to pay a lot for fewer benefits. Clearly, Japan has an incentive to reduce its debt burden.

But the Japanese economy is currently being buffeted by strong headwinds. China’s economic fragility, together with the threat of a British exit from the European Union, is generating significant uncertainty globally. Moreover, while the decline in the price of crude oil is, in itself, beneficial for Japan, a major net importer, its negative impact on other major economies is spilling over onto Japanese exporters. Then there is the US Federal Reserve’s hesitation to reverse its monetary policy fully, which has hurt prospects for a more competitive exchange rate and growth in Japan’s equity market.

Against this background, Prime Minister Shinzo Abe was recently faced with a key decision: whether to follow through with a planned consumption-tax hike, from 8% to 10%. Though the hike would have ostensibly served the objective of balancing Japan’s budget, it also would have undermined consumption, which has yet to recover from the last tax hike, from 5% to 8%, implemented in 2014. Abe decided to keep pedaling: he postponed the hike for two and a half years.

Since launching his economic revitalization strategy – so-called “Abenomics” – in 2011, Abe has presided over a roughly ¥12 trillion ($115 billion) increase in government revenues. The labor market is now in its best shape in many years, with an unemployment rate of just over 3% and a high vacancy-to-applicant ratio. Only the consumption component of GDP is weak. Abe knew better than to allow the pressure to reduce debt to drive him to risk the gains of Abenomics.

The announcement of Abe’s decision to postpone the tax hike did not, as some feared, cause the market rates of Japanese government bonds to rise substantially – an indication that investors do not view the bonds as increasingly risky. It seems that, like Abe, markets recognized the need to balance the imperatives of debt reduction and economic growth.

The announcement of Abe’s decision to postpone the tax hike did not, as some feared, cause the market rates of Japanese government bonds to rise substantially – an indication that investors do not view the bonds as increasingly risky.

Not many investors left with yields below zero out to 10 years.

The biggest bank is considering turning it back on possible capital gains realised accumulating bonds in the marketplace and subsequently delivered to the Bank of Japan's QQE programme.

It's good to see bit of honest commentary.

Of course government Ponzi schemes are predicated on the absurd notion that the future will always be bigger than the past (infinite growth on a finite planet) and the absurd notions that the energy supply will increase forever and the effects of pollution are containable. Since none of the aforementioned are true there will be a great unravelling fairly soon.

Japan Inc is reducing its debt burden; or more accurately increasing its net wealth by US$60 billion a month, all by printing money by the BOJ. One of a number of outcomes of that printing is that 40% of the government debt is now held by the BOJ, so government to government debt. Much of the rest of their government debt is owed in yen, and nearly all to Japanese entities. So for every yen the government increases its debt, and or the BOJ prints, someone else in Japan Inc increases their net wealth. It all keeps their exchange rate competitive, something all of Japan understands well, unlike say TVNZ who can't help themselves reporting a drop in the NZD as terrible news. It is no accident or coincidence that unemployment is 3%. They still have a very significant current account surplus, so it would be madness to suppress consumption. Their situation keeps being reported as a crisis, when it seems very far from it; they are being let buy up vast swathes of world assets for free.